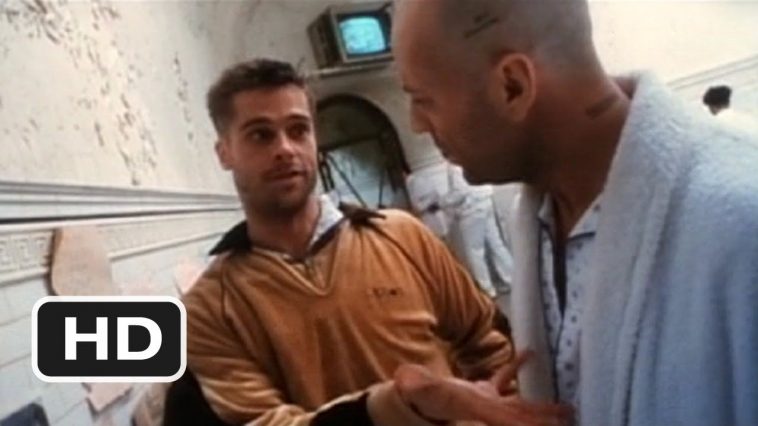 American director Terry Gilliam is rightly considered one of the best and most respected film workers. His directorial projects are specific in that they possess lavish visual beauty, which is adjusted to the smallest details in order to make the world shown convincing and convincing. Such is the case with this great apocalyptic drama from 1995.

The beginning of the film takes us to 2035 and we learn that in 1996, an unknown virus almost exterminated the human race. The few survivors took refuge in the underworld where they managed to make a time travel machine. A team of scientists, based on physical and mental characteristics, sends prisoner James Cole back to the past, in order to successfully expose the terrorist organization “12 monkeys” that created the virus. However, a system error occurs and James is sent to 1990, a time when the apocalypse was not even announced, and he ends up in a madhouse because of his incredible story, where he meets Jeffrey Goins, the son of a virus expert.

The era in which the film was made is known for the spread of dangerous and, until then, unknown viruses, such as HIV and Ebola, so that the choice of theme was a complete success. According to him, the director found inspiration in an unknown French film, which had a great base for the script. The script itself is superbly written, it is full of twists, quality dialogues, it is exciting and quite tense, and it does not allow the viewer’s attention to diminish at any moment.

The whole project visually looks beautiful and really convincingly evokes the post-apocalyptic world. According to the script, that era has an interesting retro technology, which is very similar to the technology used in another great film by Gilliam – Brazil. The director skillfully balances between real and imaginary locations, so that the viewer is skillfully intrigued by thinking about what is real and what is not. A curiosity is the fact that the film had a budget of only 29 million dollars, and that it still managed to become a cult sci-fi.

The cast is great and their performances are largely responsible for the quality of the film. The film is dominated by Bruce Willis, in an extremely atypical role for him. With his appearance, attitudes and thoughts, he is more reminiscent of a villain and, instead of representing an alpha male as in previous projects, Willis this time plays an extremely insecure sociopath. He is accompanied by the then young Brad Pitt, who earned an Oscar nomination for his role as the deranged Jeffrey. It is in this paradox that such a beauty plays a madman that lies Pete’s charisma and ability to be attractive, even though he is essentially very repulsive in his role.

“12 Monkeys” is a must-read film and is one of the best sci-fi films of all time. Fantastic world, top script, great acting and a very nice impression they leave together should be enough reasons for everyone to watch it.