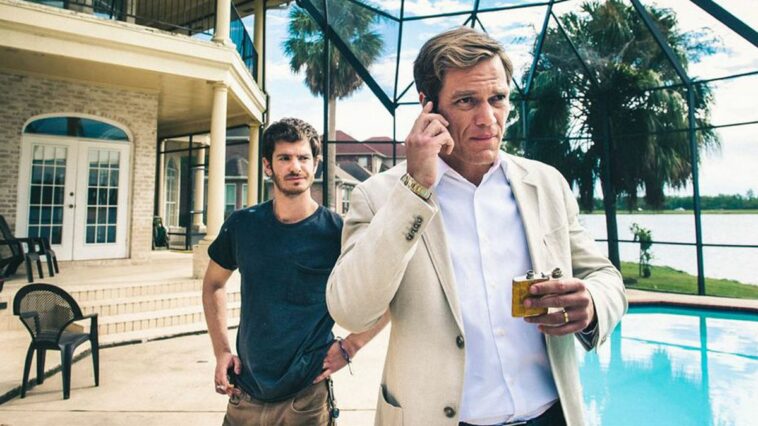 Denis Nash (Andrew Garfield) is a construction worker and the single father of a nine-year-old boy, Conor. He lives with his mother Lynn (Laura Dern) in Orlando, where he can barely make ends meet, because there is a big crisis in his domain. After failing to comply with the bank and a loan, he was evicted from his home with his family by real estate broker Rick Carver (Michael Shannon). When they find themselves on the street, Neša has no choice but to go to the cheapest motel and move in for a while. When they settle down, Nash goes to look for a job.

After a series of failures, he was presented with an unusual and unexpected business opportunity – to start working for the man who kicked him out of the house. Nash agrees, secretly hoping to reclaim the confiscated property. Carver introduces Nesha to the risky world of real estate, to the world of fraud – namely, Carver steals from banks and the government in a very perfidious and illegal way, getting richer and richer. Nash hides his new boss and job from his mother, leads such a double life and slowly begins to question himself and his conscience, which is starting to torment him more and more.

The first thing that caught my eye at the very end of the film was the check-out rush and the dedication to the great Roger Ebert. Namely, Ebert once called Bahrani (the director of this film) the director of the decade at a festival shortly before his death. That is why Bahrani decided to dedicate his real debut (even though he made films before this one) to perhaps the best film critic ever and thus give him more than a well-deserved homage. Ramin Bahrani (Ramin Bahrani) is a promising American director of Iranian descent who has replaced the current alternative in directing with a deep-seated mainstream that will certainly not meet with any positive criticism. The film itself, which is based on a true story, although it deals with the problem of credit indebtedness in an excellent and very clear way, has not met with positive reviews from important critics because it strikes at the very core, the foundation of the so-called an American dream that is not nearly as fabulous and beautiful as it appears.

Any film that shatters that American dream is always, by some unwritten rule, either severely criticized by the relevant people in charge of criticism or sidelined (for a while) like this film, which came out as Birdman, screened at the same festival in Venice in 2014). I don’t mean to philosophize about banks, powerful giants, capitalism, I leave that to the smarter ones, I will only describe the film in a few phrases, how I experienced it and what kind of thinking it encouraged me to do. The screenplay for the film was written by Bahrani himself, with the help of two fellow screenwriters who have been collaborating with him since the very beginning of his film career, and it is interesting that they are also Iranians. The highlight of the film (and I tie it to this part about the script) is definitely Carver’s monologue (part of the quote in the introduction) and it is the best part of the film and I definitely recommend that you pay attention when that part comes.

Bahrani introduces us to the life of our hero Nesha very effectively, quickly and aggressively at the beginning and slowly calms the tensions. The film gets a lighter pace, but only seemingly. Nothing is easier in our hero. It shows us crystal clear boundaries that should not be crossed if someone wants to maintain their morals and integrity. Borders are being crossed again and it is not at all pleasant to be on the side where you crossed. Greed can overwhelm anyone, but only a few of us can resist it (with all the attendant consequences) as our hero at the very end. The moral turmoil that tormented him, however, turns into pure morality and he breaks down, making a decision that can cost him everything. Bahrani wanted to present this moral catharsis in the best light, and in my opinion he managed to show us that there are still people who will do the right thing for someone else or for some common good, because it is never too late.

If I had to describe this film briefly or in just a few words, it would be a demonstration of the power of the acting skills of two great actors. As for Michael Shannon, we are less or less accustomed to him (the majority), to always be brilliant in any role written to him, but in this film his masterful acting is added a new dimension of slimy character that only he could to present in such a convincing way and to make us hate his character in a few seconds. Although Shannon was without a doubt a masterpiece, the young Amazing Spider-Man Andrew Garfield plays the main role in this film. It’s really amazing in the movie! In my humble opinion, with this performance, he finally convinced even the most suspicious of the caliber and talent of the young actor.