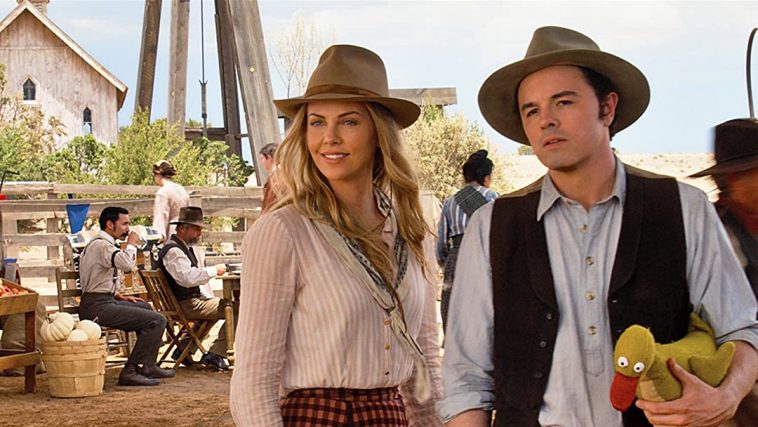 We have established for a long time that good comedies are an endangered species in extinction, and only sometimes a tolerable achievement appears that leans towards this genre. How much such films are worth mentioning is also very debatable, but since we don’t have many choices in the mentioned field, sometimes we still have to deal with novelties from this sphere of film. Starting the review in such a pessimistic way, it would be said that the film A Million Ways to Die in the West is not a very promising introductory word. But let’s go a little further to find out if this film belongs to at least that tolerable group, which today seems to be the maximum that Hollywood offers us within its long-failed humor.

The protagonist of the film is Albert Stark (Seth MacFarlane), a poor young cattle breeder, a completely atypical inhabitant of the classic Wild West. Albert is generally satisfied with his life, but he is a bit burdened by numerous dangers lurking around every corner of the inhospitable environment in which he lives. Also, Albert is additionally disturbed by the indifference of his fellow citizens to the fact that human life in their city has very little value. All this comes to the fore after his breakup with Luis (Amanda Seyfried), who shortly afterwards finds himself in the arms of the wealthy merchant Foy (Neil Patrick Harris), which is the last straw in Albert’s despair. However, the mysterious and unusual girl Ana (Charlize Theron) entered Albert’s life quite by accident, and she will spontaneously try to regain his self-confidence and optimism. The two begin to build a close friendly relationship, with Albert having no idea about the nature of Ana’s mysterious past, which will soon put them both in a series of problems.

As for the humor in the film, ie. a segment in which all eyes are primarily on, since it is still a comedy, it can be said that it has “everything”, but that despite that, nothing stands out. There is, of course, the ever-present “toilet humor” that seems inevitable in Hollywood, while we still don’t see clearly what is so comical about feces and human physiological needs, which seem to be an inexhaustible source of laughter for American audiences. . Namely, what bothers me the most is that there is no tendency in the sketches of the mentioned topic to add at least a minimal note of creativity, which would make them at least a little more meaningful. Described by the simplest example, it is expected that the fact that a man farted will be funny in itself. On the other hand, there are some more interesting homages to some western films, which we will not reveal for the sake of those who have not seen the film yet, but we will only tickle your imagination that one of them was an extremely pleasant surprise for us.

The very appearance of Seth McFarlane as an actor is not particularly comical for us and we can even say that he is a bit disliked by us, which means that his engagement in the title role is not a big hit. Next to him, there are a number of famous actors such as Charlize Theron, Amanda Seyfried, Liam Neeson and Giovanni Ribisi, who would probably attract our attention in the realization of another genre, but in this case they passed almost. unnoticed, leaving us with their performances quite indifferent. In other words, if we had the chance, we would advise them never to appear in comedies again. Probably the funniest of the entire cast would be Neil Petrik Harris, but still not enough to shower him with special thanks.

Comedies with a western theme are certainly not a novelty in the world of film, but it can be said that the western is not used so often compared to other comedies, and that this film may have broken the monotony of classic romantic comedies. judging to hold a monopoly in this genre. Seth McFarlane, who is also the director and co-writer of the film, is already a well-known name in the world of comedy, and thanks to that we can say that we had certain expectations from this achievement. Namely, McFarlane is the creator of the popular animated TV series Familly Guy, which is not a naive item in the world of humor, and his comedy Ted (2012) was quite successful, thanks to which we will soon see its sequel, and it can be said that our mentioned expectations are not unrealistic at all.

However, A Million Ways to Die in the West is, in our opinion, only a pale shadow of McFarlane’s splendor, which will actually lower our expectations of his future projects.