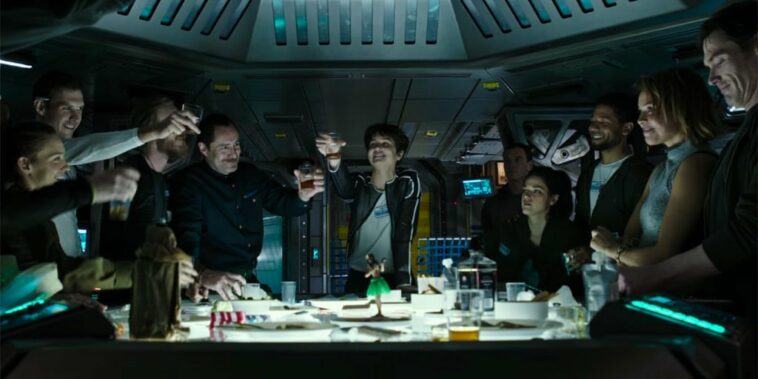 Covenant is a spaceship with a mission to colonize the planet Origae-6. In addition to the crew, there are about 2000 people in hibernation on the ship, 1000 embryos and one android – Voltaire (Michael Fassbender). While everyone is asleep, Voltaire takes care of the ship’s operation. However, the ship is suddenly hit by a storm charge of neutrinos causing considerable damage. The crew wakes up from hibernation and tries to save the ship. In all that hustle and bustle, the ship is left without its captain. During the repairs, Covenant catches a strange signal, which seems human. It turns out that it comes from a planet that is very close, and according to estimates, it has ideal living conditions. The new captain decides to examine the nearby planet before continuing his journey. The discovery seems great, however…

Alien: Covenant is a direct sequel to the 2012 film Prometheus. Behind the director’s chair is again Ridley Scott, determined to correct everything they resented about Prometheus. Personally, Prometheus is very good to me, however, he caused one of the biggest debates in the film world. Some love him, others go home. Either way, it can certainly be considered a great success, given that so much has been said about him, and is still being talked about. Regardless of everything, Ridley started with the first of the announced three sequels of Prometheus. All of them together are just an introduction to the original story of Alien and the well-known Ripley and her nemesis Xenomorph. As he says, his wish is to introduce us through these films to how and who created the monster we know.

Several famous directors have tried their hand at the Alien franchise. After Scott, he filmed Cameron, Fincher, Jeunet. Each put his own personal stamp, but Alien remained his own, with a single Ripley and the indestructible Xenomorph. Scott and Prometheus tried a different approach, more philosophical, with the intention of answering the question: Where do we come from? Who created us and why? There were also some problems and acceptance of the film, but that’s for another story. At Covenant, he continues with his questions and quest, giving us answers, developing the story of the beginning, the creators and creations and all the complexities of that relationship.

Developing it on the assumptions of Prometheus, Scott skillfully leads the story in a different direction. He transfers all the questions, hypotheses, doubts, dilemmas, to new characters, new creators and creations. The search is the same, to find the answer, but it expands and creates a new context, where everything now takes place under the auspices of creating a perfect being. Although it seems that the topic is still complicated, especially for a film that still has sci-fi / horror / action in its sign, Scott skillfully combines it with each other and, while you are thinking about all this, or you come to different conclusions. and my understanding, you do not lack excitement, tension and adrenaline rush.

Beneath his philosophizing, Ridley returned in full condition and again brought us one, so to speak, technically perfect film. Phenomenal scenes, ambience, music, camera flow, photography and the overall atmosphere of the film are at the highest level. The effects are great, as are the action choreography and scenes. Everything is perfectly weighted and set up without a mistake. I didn’t expect anything less. Ridley Scott and Covenant paid tribute to the entire franchise in a certain way, because you can’t help but notice certain fragments of all the predecessors through the film. From the ship, the atmosphere and the relationship between the characters, the appearance of the same, certain scenes, etc. Throughout the film, the spirit and uniqueness of the Alien franchise is visible, which is the uniqueness of this film.

What is especially good in the film is the quality cast, which has done its job at the highest level. While everyone is good at their minor or major roles, there is certainly a special performance by Katherine Waterston as Daniels (read new Ripley) and another fantastic role by Michael Fassbender, this time in the dual role of David and Voltaire. Lance Henriksen was a great and creepy android in old Alien, but Michael did a phenomenal job here. He was great in Prometheus as well, but this is a level higher.