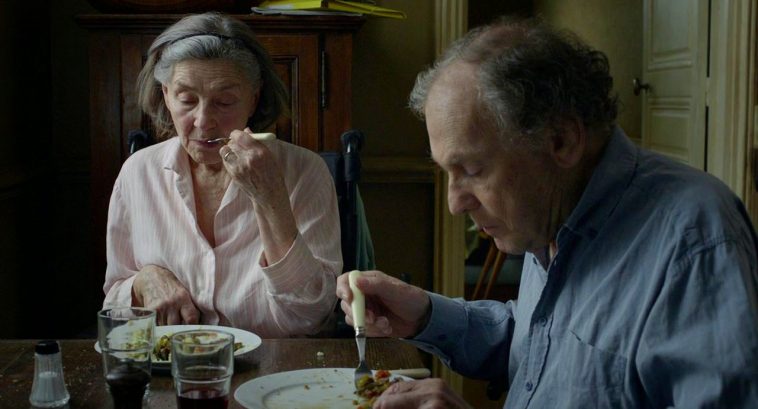 What is “Love”? Love represents literally those words “In good and in evil”, and Haneke (Michael Haneke) uses them in a completely universal way without any pathos. His long, static shots from the opening concert with scanty dialogues are justified. However, these are people who have known each other all their lives and one look, reaction, waving of the hand speaks much more than the conversation itself, sometimes completely unnecessary. The depiction of the apartment of the spouses is especially fascinating. Each room had its few seconds and we can notice a lot in those sequences, especially emphasizing the profile of the people the director introduces us to.

It is an intelligent, calm and very attached couple of retired music teachers, who spend their time following the concert activities of their former students. They are perceptive old men, rich in inner beauty, proud in their old age and very aware of their late years. That they are good people can be seen from the attitude of acquaintances towards them, neighbors, former students who visit them with love and respect and unreservedly offer help, even though they know that proud heroes will not accept it. Isabelle Huppert consciously left the scene to the experienced Trintignant (Jean-Louis Trintignant) and Riva (Emmanuelle Riva) and contented herself with the role of a daughter who is axed by their stubbornness, dedication, secrecy, or rejection of any of her influence. sharing pain and responsibility with a caring father.

It is in these scenes that love is seen. If they have already supported each other in happy moments, they will be alone in these bad ones and they will solve this “problem” in their own way. One of the most beautiful scenes of the clinically cold Haneke is when Gerges takes complete care of his wife by forcing a rude caregiver, who treated Riva humiliatingly, and she could not tear herself away from the paws of a rude woman due to her illness and nagging condition. is now beautiful).

Let’s go back to Haneke’s style of static shots that patiently capture every reaction of either Gerges or Ana for two or three minutes, and sometimes they are sparingly placed far away so that we can’t see their faces clearly, but as voyeurs we are present in that intimate world of two people. Haneke is also prone to repeating shots, such as the front door, white porcelain cups of tea that were probably carefully chosen for the house, the desk, the bookshelves, Gerges’ frowning look that grows into a sensible, sweet call of love. The frame of the front door is repeated periodically, and it is placed so that in that frame we see two rooms (living room and bedroom) separated only by a thin wall and a bar from the door, while one is always illuminated by daylight and the other dark. Attention was also paid to the composition, which can be seen most in the shots of the study, which is full of books and which are a kind of “background” chair on which Gerges or Ana are sitting (which speaks of their vividness and artistic dedication). The very end of the film can be freely interpreted, perhaps through some religious messages or the meaning of symbols, e.g. pigeons, open windows, rain, etc.

You don’t have to agree with the outcome of the event and Gerges’ “final touch”, certainly that is not the topic of this film either. The theme is love, but the painful other side of the coin, and that is what Haneke portrayed masterfully, nakedly, realistically without any additional spicy factors in order to facilitate the digestibility of this really difficult topic. Gerges and Riva “speak” in some of their “unique” languages, the language of deep respect and vows they promised each other. So, even if the end is incomprehensible to you, you must understand that love is sometimes incomprehensible, it is tangible, it is felt, it is unpredictable and leads us to actions that sober people would not even dream of doing.

As one colleague says, Haneke may have become more sensitive in the old days, but he still goes his own way, asking simple questions and opening topics so related, ordinary and painful that we don’t like to talk about them. From all this, I concluded that the greatest lesson of this film is that in the most difficult moments of your life, the greatest advantage and well-being is to have a person like Gerges by your side.