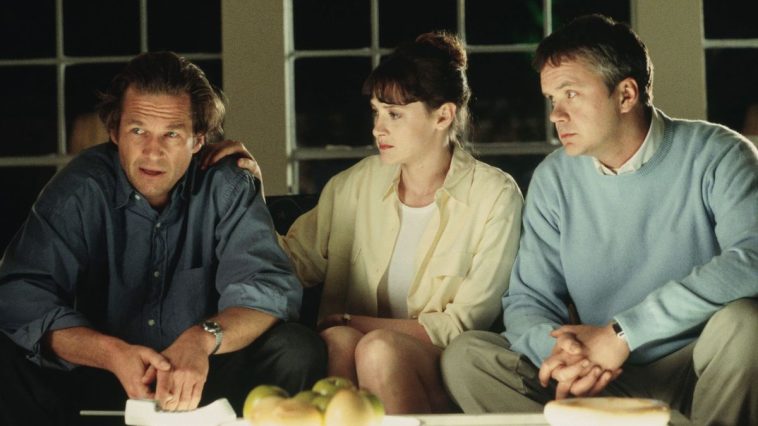 When I hear the word thriller, I mechanically think of this film, one of my favorite and best thrillers. Such films are rare because today psychological thrillers, which include this film, are similar to each other, like an egg to an egg. Some domestic translations of this film would be Arlington Street or the more common translation Citizens of Dangerous Intentions. In this case, very dangerous intentions.

Michael Faraday (Jeff Bridges) is a university professor who teaches contemporary American history. Ever since he lost his wife, an FBI agent who died on the job, he has obsessively devoted himself to the study of terrorism, and he often introduces this topic in his lectures. He lives with his son Grant and girlfriend Brooke. One day, on his way home from work, he comes across a boy who is wandering strangely in the street. When he approaches him, he sees that the boy is badly injured and drives him to the hospital. The boy’s parents Oliver (Tim Robbins) and Cheryl (Joan Cusack) are also coming, and it turns out that they are in fact his first neighbors who have been living on his street for two months. After that event, the families become closer, but as they get closer and closer, Michael notices some illogical things related to Oliver and begins to suspect that he is a terrorist.

The film was directed by American director Mark Pellington, also known for the 2002 projects The Mothman Prophecies and the Cold Case series, as well as working on videos with American rock bands Pearl Jam and Alice in Chains. The main and basic theme of this film is paranoia in its worst form. With this film, he puts forward the thesis that was a nightmare at the time (after all, it was 1999) that America is not in the greatest danger from some external influences, but most from within it (America), more precisely from some seemingly ordinary and normal people. who live in America, such an exterior that it is not known what exactly is behind it.

This is a very tense, intelligent thriller with a dose of psychology that creates a feeling of discomfort and anxiety. The idea for the script was given to Ehren Kruger, who wrote it. He has been creatively lost ever since because he is currently best known for his work for Transformers which, you will agree with me, does not go in favor of his great work in this film. There is no seriousness, mystery or depth in Transformers as in this project. However, no matter how dear this film was to me, I must also point out the flaw due to which it will not get the highest grade from me.

This is because of the very end, more precisely the last half hour of the film, when the film turns from a very intriguing plot into such a clichéd and predictable story with action and shooter (without which, of course, the film could have passed), but I guess it’s a pain American films / filmmakers with similar themes.

As for the acting itself, it is at a very high level. As a rule, we should start with the main character Faraday, played by the proven great actor Jeff Bridges, who has never been particularly dear to me. At times, he pretends to be fierce, tries too hard and is hysterical in his acting, aggressive. Personally, I consider him too hyperactive actor and I am not a fan of him. The role may require a dose of paranoia and obsession from him, which fits into his usual acting profile, and this is where the reasons for positive criticism of him should be sought. As always, I was thrilled by the silent pet, the great Tim Robbins. His acting, like the film itself, is intriguing, does not reveal too much, and we actually guess or see everything, with a much less noisy effect, and much better and more convincing than Bridges. Joan Cusack and Hope Davis were good, but not so much to endanger these two characters, as well as the boys who played their part very well.

If you want to watch a quality, tense, exciting, dynamic and above all very intelligent thriller, then this is the right choice for you. A film that never gets bored and that many of today’s thriller creators could at least look up to.