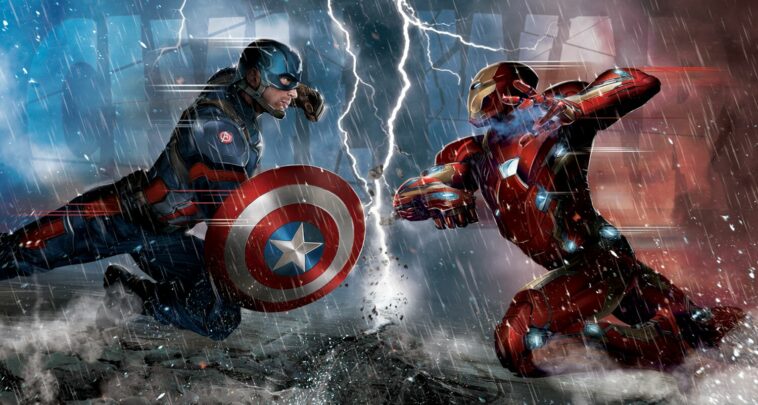 The last of a series of these shock waves is the third part about the famous hero Captain America, and also the thirteenth from Marvel, and his name is Captain America: Civil War. The film builds on the previous Winter Soldier, but also on the last Avengers Age of Ultron, i.e. describes the events of a year since the chaos in Sokovia. The Avengers are still doing their job, but their last one brings innocent victims again. It seems that it is too much for the whole world and they are under attack from the so-called decision. Sokovia Accords, which says that the Avengers must have UN supervision and can act only if they are approved to do so by order of the competent body, specially formed for them.

This, of course, encounters different reactions from the Avengers, who are divided into two groups or teams. The first is led by Ironman, who is in favor of the new law, and the second is led by Captain America, who does not want to be someone’s weapon. There are complications and clashes of epic proportions, while in the background of all this there is a new danger.

Nothing is accidental, and so is this Captain America with this very story. As we all know, a little earlier came the DC response to the Marvel movie universe, named Batman v Superman: Dawn of Justice. That film is the beginning of the DC film universe and an announcement for all future hopes of the DC world of superheroes. However, if you completely simplify the story of both of these films, they are basically the same. Two worlds collide, two titans or two teams of titans, for one reason or another. While this fight is going on, there is a greater danger in the background, and that same danger largely staged the initial conflict. Although everyone is here in the end or in essence friends, they will come to the green branch only after they destroy a certain piece of our mother country. In essence, the only difference is the approach or mood that comes with the name DC or Marvel.

While DC has its darkness, seriousness, so Marvel has its trump cards and here it showed them in full light. Captain America: Civil War is a true representative of the Marvel movie universe. Over two hours of spectacle, lots of fun and a story that, I think, could have been better. Better mostly because the last CA: Winter Soldier for me is perhaps the best of all thirteen films. He is primarily captivated by the story, the development of the characters, and only then by the spectacle and entertainment. I expected something like that in his sequel, but it didn’t happen. This CA looks more like a new part of Avengers.

In addition to the fact that everyone except Hulk and Torah are together, and even new members are coming, the whole setting of the film is like that. A bunch of characters, where everyone takes a piece of attention for themselves, so we can’t even focus on the character whose name the film bears. Also, a lot of that builds on Winter Soldier and the last Avengers, so a new spectator, that is. one who did not watch them might be quite confused. Then comes the classic Marvel spectacle, which is hand on heart, for fans like me a real pleasure, because everything is done superbly.

What Marvel makes Marvel, and that is humor and great fun, is permeated through all that. Many comic scenes are interwoven throughout the film, especially the action scenes, so that they make them more accessible to the general audience for which it is intended. Also, this takes the attention away from the fact that superheroes, as fighters for good and justice, kill a bunch of innocent people during the process, not to mention the villains. But it’s Marvel. On the other hand, many resent BvS: Dawn of Justice for not having much fun. Dark, serious, you almost won’t see anyone killed.

Like I said, it has everything you need, Marvela in full glory, but again my story is pretty weak, although in all these films the story is in the background, the spectacle in the foreground. Although much weaker than its predecessor, Civil War has a lot to offer. In addition to the above, there is a plethora of phenomenal actors, who play icons of superhero comics. If they failed with the story, they caused general enthusiasm by adding new characters. There’s the Black Panther, the Ant-man we saw last year, but what thrilled us all was Spider-Man, when we’re waiting for a new movie, and here’s a spectacular, silly kid with a thousand and one questions and constant chatter during the fight, just right.