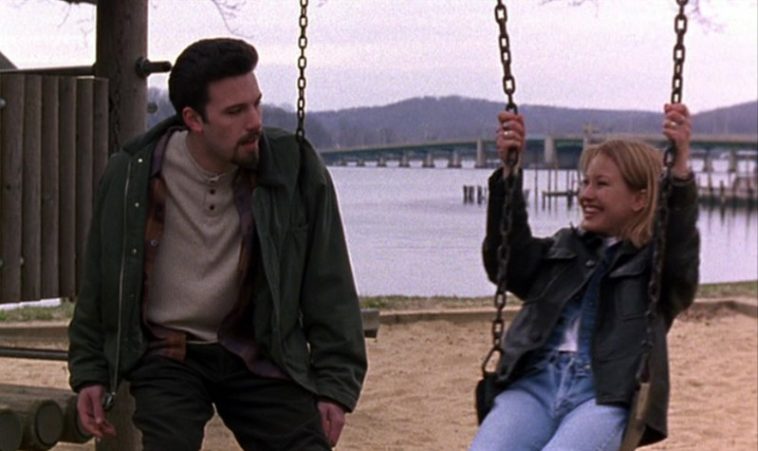 The main characters of the film are Holden (Ben Affleck) and Benki (Jason Lee), underground cartoonists who became famous with the series Bluntman and the Chronicle. They go to a comics convention in New York where Holden meets Amy (Joey Lauren Adams), also a cartoonist. After a short time, Holden realizes that she has all the prerequisites to embark on something more serious with her. However, it turns out that Amy is a lesbian, which will upset Holden in every sense of the word. Amy’s past, which is extremely inappropriate, does not support that, so Holden must determine whether prejudice or a potential life companion is more important to him.

It must be admitted that it was a very brave move by Kevin Smith to present his third project as a romantic comedy, because it is generally known that this genre almost never had a place in criticism, especially during the 1990s. One gets the impression that he simply defied film critics, showing that some bad reviews for his previous work were unfounded. This film is also full of dialogue with street jargon, swearing and specific humor, and the topics they deal with are a wide range, starting from Star Wars and comics, through friendship, all the way to love and sex.

Chasing Amy is housed in this author’s favorite location, among the New Jersey working class that is interested in comics and popular culture in general. From a rather hilarious, comic film, he eventually goes into serious studies of relationships and specifically interpersonal relationships within them, dealing with how much people are willing to go beyond their beliefs, attitudes or prejudices to surrender to another human being or to forget their partner’s past . It makes sense in all this we see, but the downside is that the transition from comedy from the first part of the film to the drama in the second part was done too sloppily.

A trio of actors stood out in this realization. First of all, it is Joey Lauren Adams who balances between extreme sympathy and extreme irritability, primarily because of her voice. Next to her are Ben Affleck in his characteristic role during those years, as a guy full of doubts with himself, as well as the great Jason Lee in the role of Benky who tries to help his colleague and friend. Of course, I must not forget the tandem of Jay (Jason Mewes) and Silent Bob (Smith).

Chasing Amy is an unusual and intelligent romantic comedy that deals with serious topics in a way typical of Kevin Smith. A great combination of brilliantly written characters, clever dialogues and sharp street language.