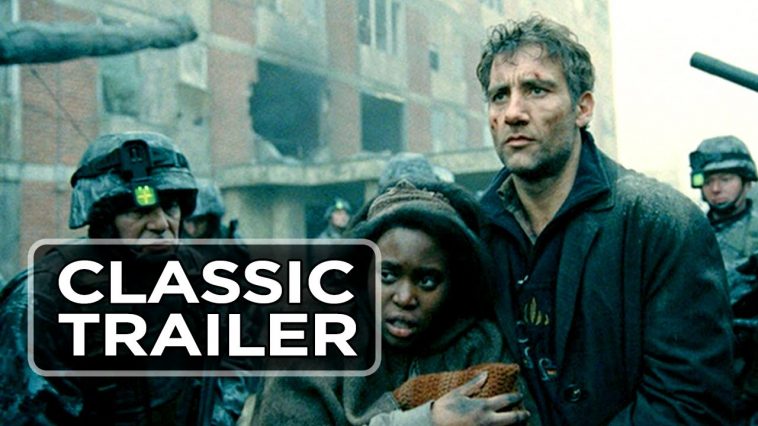 The past few days I’ve had a crisis of writing reviews, I thought, maybe I’ll get over it if I watch some movie. That’s how it was. I watched this great sci-fi thriller drama for the third time, which asks many life questions and yet gives so few answers to them.

London, 2027. Not so distant future. Apart from the fact that the third world war destroyed the world, a mysterious disease appeared – since 2009, no children have been born in the whole world, women have become infertile. The only country in which the situation for life is more or less solid is Great Britain, but it is also struggling with more and more refugees from all over the world. The protagonist of the film is Theo Faron, an activist, once a respected intellectual and a man with a family, who is currently living a miserable life due to the tragic loss of a child and divorce. Out of his own lethargy, he is shaken by the call of his ex-wife, the American Julien Taylor, who remained a political activist for the fight against human rights. She begs him for a favor to help her in case a young black woman takes her to a certain location.

Namely, the girl is very important because she is the first pregnant woman in the world after about 20 years, and that is why her survival and the survival of her unborn child is of the most important importance for the entire human race. The future of humanity has been reduced to a frighteningly short human life after which no one will remain, and a glimmer of hope can only be found in a new life, whatever its race. However, since the state is under the control of a totalitarian punct regime that prefers white skin color, Theo, Julien and the team embark on an almost impossible mission of rescuing the girl.

This is one of the best films on this topic, a subset of post-apocalyptic films with sci-fi elements. The film and the story in themselves raise many important life questions about the very survival of the human species – about racism, religion, religion, politics, wars. There are some answers, but you have to follow them and find them while watching the movie. It was directed by Mexican director Alfonso Cuarón, who largely wrote the script. He is known to a wider audience for one part of the Harry Potter film, and this year his Gravity was released, a film that has garnered all possible praise so far. From the films he directed, we can conclude the diversity of both the genres and the topics he deals with. After all, this film is a kind of summary of his creativity, all in one.

The acting performances are exceptional because in the film we have three great actors who dominate, each a separate part of the film. Clive Owen as Theo is one of the best character actors of today, a man who chooses mostly better roles (and therefore movies), and the role of a desperate and lost man who finds meaning in a glimmer of hope is exceptional, at the same time you feel sorry for him and admire him. My favorite Julianne Moore is great in her role, but, in my opinion, she didn’t stay long enough and I think her destiny in the film is badly determined, because it could have been used much better. And finally, we come to the great Michael Caine, who is a living legend, a man who can play everything. After all, no matter how many years and movies he has behind him, I believe that he has acted out everything that can be acted out.

As a flaw in the film, many state that the film is too cluttered, confusing, unconnected and fast, but the film itself is a reflection of how a person lives today, so the director wanted to compose it. It gives some charm to the film itself, a lot of the symbolic can be drawn from it. I liked the film exactly as it is, I watched it several times, I think I will in the future a few more times, because this film deserves it, because of the originally processed topic that is very important for the human race. Any recommendation.