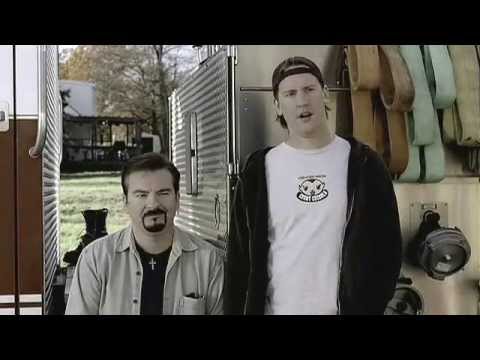 Sequels of popular films very rarely manage to repeat the success, interesting and quality of the first part. The effect of surprise is often lost, the author’s motivation or viewers’ expectations increase, so the sequel results in a failure. However, this sequel to the cult comedy from 1994 is not a complete failure, but its quality and curiosity are not in the range of the original.

The beginning of the film is in black and white, which subtly emphasizes that it is a sequel. It shows a fire in the Quick Stop store, so our heroes Randall and Dante have to find new jobs. A year later they work in a fast food restaurant, which offers them no progress or benefits other than free food. Randall is satisfied with this way of life, while Dante plans to go to Florida with his fiancée, where a wedding, a new house and a better job await him, but certain circumstances will influence him to change his decision.

The plot of the film is set in 24 hours, just like the original. It is made in color technique, with a noticeably larger budget. The script is interesting, full of dialogues that raise different topics, and I would especially mention the scene in which Randall explains the plot of the Lord of the Rings trilogy. He has a characteristic, politically-incorrect humor and numerous funny scenes, some of which are extremely debatable and provocative.

Kevin Smith took on a big job again, so he was a director, screenwriter, editor and one of the actors. He himself was probably aware that he could not repeat the success of the original, but the earnings were enough to talk about the third, final part. A large number of critics criticize the final scene in which the donkey participates, believing that it is extremely unnecessary and that it destroys the film, and I would partially agree with that.

The popular quartet of comedians is repeated, so Dante, Randall, Jay and Silent Bob were played by Brian O’Halloran, Jeff Anderson, Jason Mewes and Kevin Smith. They are joined by the ravishing Rosario Dawson in the role of restaurant manager and Trevor Fehrman as a restaurant worker. This time, too, there is a specific chemistry among the team, which gives a big plus on persuasiveness and gives the whole project a well-known atmosphere and specific warmth.

If you are a big fan of the original, you will be satisfied with this sequel. The fact is that he is weaker than him, but he has enough material to make him laugh and have a good time.