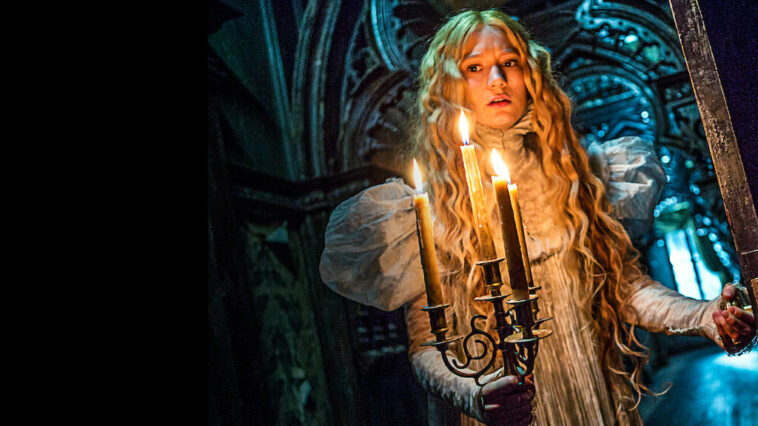 I’m sure that many of you have a director who is just right for you, one who makes films the way you would make them. One who insists on what you would insist on. One whose movies you watch again and again without exception. One such, for me, is certainly the great wizard of the supernatural, Guillermo del Toro, and the film I am writing about today is his latest achievement, Crimson Peak or Scarlet Peak.

As I said before, Del Toro is one of my favorite directors, and the reason is simple, he paints his rich imagination on the big screen, just as I would mine. The creator of a supernatural, fairy-tale world, with all its wonders, beauty and fear lurking in the shadows of that same beauty. His world is always rich, rich in colors, carved with countless details, imbued with metaphors expressed in strong colors. It is home to some of the strangest and scariest characters we have had the opportunity to watch. It is a place where miraculous stories happen and where people come down to solve some of the mysteries of life that torment them in the world of our everyday life, but also to face the shadows of people who are trapped there by various consequences of their worldly deeds. Because of all the above, Del Toro is a director whose films I will always be happy to watch, so this is me too.

The story is told to us by Edit (Mia Wasikowska), and she begins with the words to believe in ghosts. The story begins on the day of her mother’s death, while Edith was still a girl. That night, after the funeral, he visited the ghost of her mother, leaving a frightening warning: Beware of the Scarlet Peak. Fourteen years have passed since then and Edith is now a strong young woman who wants to break out of the stereotype of the rigid, conservative community in which she lives. She is a writer and wants to find a publisher for her ghost story. Although her father is a very rich and influential industrialist, she fails to conquer the fences of conservatism, where it is only appropriate for a woman to write love novels and the like. It was in this struggle for her ideals that Thomas (Tom Hiddleston), a young nobleman from England, entered her life. That encounter will completely turn her life around and take her on an unimaginable and terrible adventure, where an old warning from the other world will finally become a reality…

From the first shot, I knew that another holiday awaited me for the eyes that wanted color and a painted atmosphere that only Del Toro (along with Tim Barton) knows how to give me. From the first frame, it is clear that the film will be a visual pleasure in which you will wrinkle, happy as little pigs in the mud. Your emotions will be evoked by the colors and the whole environment that Del Toro deals with as a camera, a story, actors. In this film, colors and environment are equally important, if not more so than the story and the actors, because Del Toro skillfully manipulates them and directly conveys to us the feelings he wants to awaken in us. It is so clear that black represents death and it is so clear in contrast to white snow, that you can simply feel its weight that it leaves on people. Opposite the black, there is white and light colors in which Edith is bathed all the time. Edith is a source of light, innocence, and thus a perfect target for the dark forces lurking in the dark. Edith simply shines through the whole story, and this is especially evident as she walks through the troubled world and the corridors of Allerdale Hall or the Scarlet Peak as they call it.

The dark colors of green and blue velvet depict the beauty of Thomas and Lucie Sharp (Jessica Chastain). Elegant colors float grandly through the surrounding world and very easily attract the attention of the bright Edith. They bring refreshment to the gray and cold world of rigid rules and disrespect and suffocation of the freedom that light would spread all around. It is no wonder that light is easily attracted and enchanted by seductive velvet. That velvet is smooth under the arm, warm and seductive to the eye, but there is also something in the background that casts a shadow on those strong colors.

Scarlet, a color so special and so important to the whole film. The whole place is immersed in it, where our story got its final climax and unfolding. That place is called the Scarlet Peak because of the color of the clay, the color of the land on which it stands. The whole area lives on blood-red earth where little grows except gray shrubby grass. In the center of the red world is a house with dark walls, richly carved. The interior is even richer. Everything is bathed in strong colors of green, which reflect beautiful sculptures and furniture. However, that beauty has long since lost its luster.