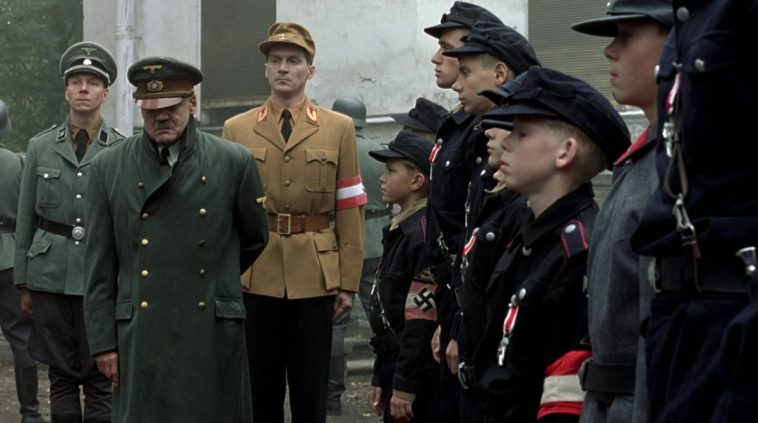 At the very beginning, we get to know the real Traudl Junge, the personal secretary of Adolf Hitler, on the basis of whose impressions this project was filmed, mostly from her perspective. She is played in the film by Alexandra Maria Lara. Germany is on the verge of defeat with the Soviet army that surrounded Berlin, but Hitler (Bruno Ganz) is still convinced of victory and refuses to surrender at all costs. However, some German leaders, such as Goering and Himmler, are slowly leaving the Führer to get at least a living head, and those who remained faithful to the Nazi ideology until the last day must find a way to end the battle for Berlin.

The emphasis of the action is on Hitler himself, a man who alternately fills officers with optimism, shouts at them and assigns them new tasks, but he also slowly falls into a manic suicidal depression and organizes his own suicide. The specific problem of the filmmakers is that everyone in the world knows how the war ended, and therefore an unexpected outcome cannot be expected, so the script is mostly straightforward. On the other hand, there was another potential problem, and that is that the author does not turn the film into a melodrama that either glorifies or openly criticizes Hitler. That trap has been successfully avoided and we are observing a neutral historical view of this man, with all his (in) human characteristics.

The fact is that it is very difficult to connect with this man, so the authors chose a secretary as the protagonist. At the very beginning, old Junge says her sincere confession that she had no idea what was happening outside Berlin, and that, combined with the young, naive Junge from the film, leaves much more room for a certain sympathy for the actors in this story. as many as 37 of them are from Hitler’s bunker. Every officer, every soldier, every secretary will leave a different impression on each individual viewer, and even your opinion of Hitler will wander from a charismatic politician, through the devil on earth, to a misunderstood old man whose ideals have clouded his mind.

Honestly, after the first viewing, I really didn’t know what to expect from the film. I assumed that the fact that the action takes place 90% of the time in the bunker does not promise too much action, but the excellent script made it impossible to feel the need for it. True, some scenes are a test of your patience, while some may have been thrown out, but most of them are there to show you as much as possible what was happening in those bunkers in those days. You will see numerous paradoxical scenes (vegetarian meals, birthday celebrations), get to know the people you learned about in history textbooks and you will brutally honestly look at fascism through the prism of its creators. In the end, the entire film crew must be praised, because it takes great courage to make a project that screens the darkest moments of its own history in such an honest way.

Bruno Ganz in the role of Führer is simply amazing, it is impossible to imagine any other actor in his role. When he is in the room, all the attention is on him, as if he were a very strict teacher during school lectures. At no point does he caricature his character, nor exaggerate it, no matter if there is a scene in which Hitler shouts at everyone around him or has an intimate conversation with individuals. Every time he is stressed in close-up or when we see only his outlines in the darkness of the room, he does what he should, adding tension and a certain horror to the whole situation. Alexandra Maria Lara interpreted her character very well, who is excellently dosed and relatively nice, but occasionally runs away in pathos. They are supported by an excellent constellation of supporting actors.