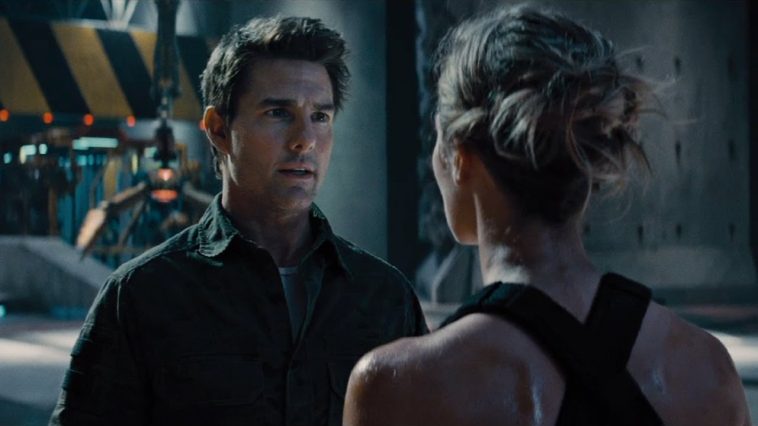 Sci-fi blockbusters are currently experiencing large-scale expansion and this time is now their fertile ground. I have to admit that despite my strong aversion to the character and work of Tom Cruise, who plays the lead role, I still watched this film in one breath. This is a great idea, smart, interesting, creative, great action sci-fi.

The plot of the film is set in the future where there is a special type of aliens, the so-called Mimics, attacked the planet and almost conquered. After strong resistance, most of the planet was liberated, except for Europe, which is still occupied. That is why all world powers are preparing a special and very extensive operation with a symbolic name – Downfall. The biggest battle is to take place on French soil. A certain Major William Cage (Tom Cruise) is coming to the rescue from America. In fact, he does not have a day of fighting in conflicts, war experience in general, but his characteristic is that he is a very skilled and convincing motivational speaker. He comes to General Brigham (Brendan Gleeson) who, despite his fierce opposition, sends him to the front line.

Cage joined the J-team as an ordinary soldier, a deserter, with whom he died the next morning immediately upon landing on the front line. However, Cage wakes up again and relives the same day. He has fallen into a kind of time hole – once he is killed, he returns to the same space and time to correct the mistake that last killed him and is now progressing a little further. At first, he is confused and distracted, he can’t cope and believes what happened to him, but over time, he uses it to learn from his own mistakes. He is assisted in this by Rita Vratanski – Angel of Verdana (Emily Blunt), who stood out as a very capable soldier in one of the battles won against Mimik.

The director of the film is Doug Lyman, who is known for his work on the trilogy about Jason Bourne – Identity, Ultimatum and Supremacy, either as a director or as a producer. He directed the films Jumper, Fair Game and Mr. & Mrs. Smith. He often fixes the camera on a certain character in his film or situation and keeps it for a while. His directing is also characterized by the use of humor in unusual situations, which we have in abundance in this film. The film is based on the sci-fi novel by Japanese writer Hiroshi Sakurazaka, entitled All You Need is Kill, and that’s what the film was supposed to be called, but the producers decided on a different title. It is really well thought out and very well performed because we have an unusual story in a sci-fi environment, and yet such famous situations because there is a lot of mix of Groundhog Day and Source Code, and it can be said that there are elements from Alien and Matrix.

I don’t know if the director’s intention was to intentionally set the film that way, but I can’t help but notice the similarity with some historical events that are symbolically drawn through the film. The final battle is called Downfall, which is associated with the fall of Hitler, and the final, decisive battle is on French soil, which is again associated with the landing on Normandy. I must also mention an interesting (but not surprising) choice of where the action takes place – the American blockbuster, and the action is located in Europe. The producers remembered them well, because every film like this makes the most money outside of America.

The action scenes are great and effective, at a very high level, while the Mimics are interesting and very creatively made, starting from their movement, all the way to the background story that they are presented as highly intelligent beings.

Acting in such productions is always secondary, but it also brings surprise in that domain. It can be said that she is very good, especially Tom Cruise, who seems to have lost that line of irritability and performed his role brilliantly. At times he is convincing and arrogant, then he is lost and disoriented, so he is full of hope, disappointed and finally determined in his own way. He was perfectly matched by the young and beautiful British actress Emily Blunt, as well as the always great Brandon Gleason.

Great recommendation from me to watch. As someone who mostly prefers psycho-thrillers or biographical dramas, it is rare for me to be delighted with one blockbuster like this. I did not find him flawed because I observed him within what he represents, and he fulfilled everything he needs to represent, even more. Innovatively arranged, smart, dynamic from start to finish, a great selection of actors with visible chemistry among them – you don’t need it anymore.