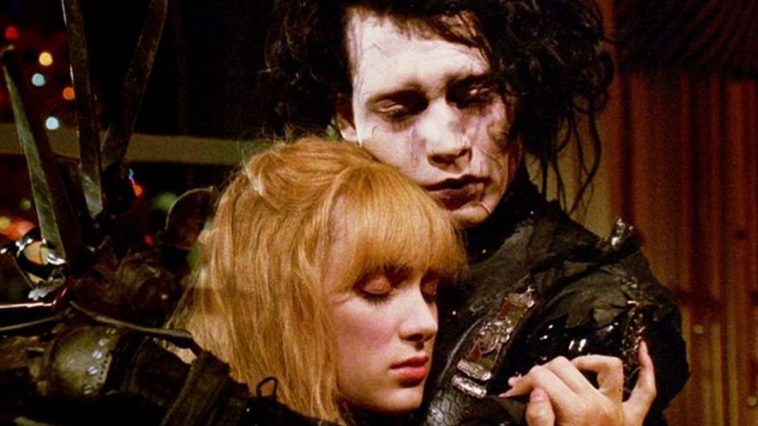 Surrealist, dark and gothic elements are often mentioned in the description of Tim Burton’s films as integral motifs of almost every one of his films. Since he gave the mainstream his personal artistic stamp, his style is still striking and specific, so we call it Bartonian. Barton’s style was influenced by many factors, and some of them are the love of Gothic and horror genre, and most of all the passion for drawing and animation. In his imaginatively created, somewhat bizarre world, there are a number of twisted, eccentric characters and comic-monstrous creatures, and thanks to his gorgeous costume design and visually attractive scenography, and cooperation with famous actors, he attracts the attention of a wider audience. Although I do not consider him one of the best Hollywood directors, he was and remains one of my favorites and I always watch his films with indescribable pleasure. One of the movies from his collection that I especially love is Edward Scissorhands. A dark, romantic fairy tale that won over audiences around the world, and even today, twenty years later, it is still remembered and often mentioned.

Young man Edward (Johnny Depp) lives in a castle located on a hill near the town. The only man he knows is his inventor, a scientist whose name we don’t know (Vincent Price). After his death, Edward is left completely alone in the dark rooms of a neglected castle, but not for long. One day, Peg (Dianne Wiest), a cosmetics saleswoman, appears at his door and, moved by Edward’s fate, gives him refuge in his own home. A timid but curious young man sets out to explore a new, unfamiliar world, from the most ordinary household items to people, and his special attention is drawn to a photograph of Pega’s beautiful daughter Kim (Winona Ryder). Edward awakens feelings he didn’t know existed, and teenage Kim, preoccupied with her spoiled boyfriend Jim (Anthony Michael Hall), doesn’t notice Edward at all.

In a small town where life flows in a monotonous, boring everyday life, the news about an unusual young man spreads with lightning speed, and aggressive and hard-working neighbors will not stop anything in their intention to meet a newcomer. Peg and her family are trying to fit Edward into the environment, and thanks to long scissors, Edward becomes a real attraction, a virtuoso in beautifying the environment, but also the hairstyles of his neighbors and four-legged pets. As the story unfolds, Edward’s feelings for Kim become stronger, and Kim slowly falls in love with him. The beautiful and almost ideal development of events will soon turn into a real drama in which injustice will play a key role.

A pale young man in a black leather suit, covered with scars and with long blades, came from Barton’s drawing. But he is only partially the fruit of his imagination. Edward’s emotional state is a reflection of Barton’s thoughts, feelings and fears that marked his growing up. He often talks about that in his films, so it is not surprising that the protagonists are mostly lonely and misunderstood souls, outsiders and weirdos. Although such a topic is quite serious and difficult, Barton always presented it in an interesting, black-humored way, which is the case here as well. Barton also looked very sarcastically at society in general, portraying residents as incapable of making their own judgments about others, succumbing to stereotypes and prejudices. Long blades instead of arms are a symbolic display of fear of other people, that is, antisocial behavior and disintegration into society.

That the film has a strong connection with Barton’s growing up is also shown by the fact that it was shot at a location in Florida that reminds of the suburbs of California where he lived. He complemented the monotonous and depressing landscape with geometrically correctly arranged houses with warm pastel colors and green statues, thus achieving a more positive, cheerful atmosphere. On the other hand, completely opposite to that, in a darker tone, he portrayed the environment in which Edward lives, so the neglected Gothic castle and the creepy music in the background, the atmosphere is reminiscent of that of horror classics. The atmosphere is further emphasized by a great soundtrack designed by American composer Danny Elfman. The initial musical theme is a great overture to this magical story intertwined with love, loneliness, good and evil.

Edward was played today by the planet-popular American actor Johnny Depp in one of the most famous and best roles in his acting career. With his role in this film, he cemented his place in Barton’s films and became his long-term business associate and friend.The legendary Vincent Price in the role of a mad scientist, appears in the film in only a few scenes because at that time he could only accept a minor role due to health problems. Despite this, his appearance in the film is very striking. He passed away a few years later, and how strong an influence he had on Barton is shown by the short five-minute animated film “Vincent” from 1982, in which he is the narrator.

Winona Ryder appears in the role of Kim. The noticeably strong chemistry between Depp and her was not just a matter of acting persuasiveness, considering that they were in a love affair at the time. The good-natured and nice Peg was embodied by Diana Viest. Peg is the most important character in this film because he serves as a representative example of kindness, care, compassion and love. Her brave, noble deeds and fight against prejudice made her a true heroine of this fairy tale. The film also stars Anthony Michael Cole (Jim), Katie Baker (Joyce), Alan Arkin (Bill) and many others, about whom it makes no sense to write separately, although they all brilliantly presented their roles and allowed this fairy tale to come together in one instructive and an interesting film experience.

Like many of Barton’s other films, this fairy tale is not devoid of pathos, but in moderate doses. This is not just an emphasis on romantic love, but it is mostly about the moral lesson of accepting diversity. Undoubtedly, Edward, in addition to being atmospheric and visually appealing, offers an inspiring and encouraging story that will make you laugh, but also deeply touch you. A fairy tale for all generations and a timeless classic that you must experience!