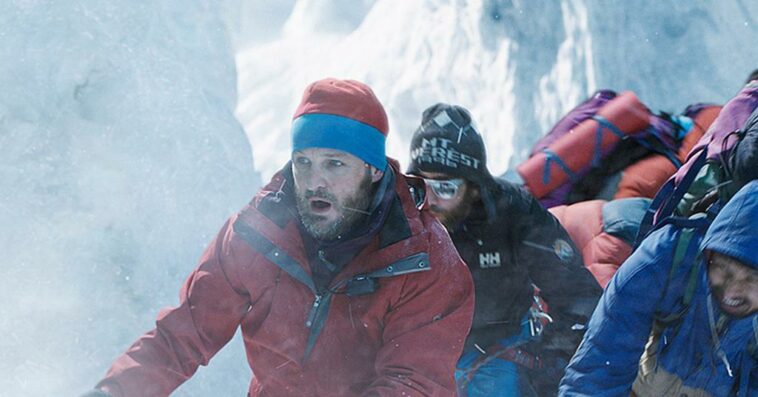 It has always been interesting for me to watch the struggle between man and nature, whether it is a documentary or a feature film. Many have been filmed on this topic, often based on true events, and often in the style of big blockbusters, quite unrealistic, but enticing to the audience. We looked at various challenges of nature that man tried to conquer from different motives. However, this year we received a film with one of the greatest, if not the greatest, challenges of nature that man can face, Everest.

Everest was filmed according to a true event that happened in 1996. The story follows an Adventure Consultants team led by Rob Hall (Jason Clarke). Rob and his team are professionally involved in organizing the ascent of Everest for all those who are ready to endure it physically and mentally, but also to pay not so little money. This time, they are joined by a journalist from a well-known magazine, which Rob sees as a chance to advertise his business and improve and expand it. The team is diverse and everyone is there for different reasons and motives, but united in their intention to do something that very few people have ever managed to do, to conquer Everest. Although this is a business for Rob, he enjoys his job and is maximally committed to it. Also, the most important thing for him is that everyone is safe and that they return alive from this adventure.

The story then follows the gathering of the team, their preparations and arrival in Nepal, and then to the base camp, from where they will try to climb to the top in stages. That year, there is a big crowd in the base camp, because a large number of teams are trying the same thing, which creates various complications. However, all the teams are embarking on their campaigns and the adventure of their lives, and if everyone will return, see for yourself.

So, a true story, a dream cast and the mighty Everest. What more could a movie fan want. What, I believe, most expected was that it would be a spectacle with overcrowded effects and some heroic story. Well, this film is not, to my great joy, because I watched the above-mentioned ones beyond measure.

Everest is a pure and honest story about man’s struggle with nature or, to put it better, man’s attempt to conquer the invincible. It is true that some have managed to climb and continue to climb, but Everest can never be conquered, as hundreds say, who lost their lives trying. Through the story, we are presented with the whole process that those who dare to go on this adventure go through. The story is set up so that you simply get something like the real experience of those who went through it. From gatherings, trips and over a month of preparation for that one ascent and step to the roof of the world. I like that everything is shown so honestly, without unnecessary pathos and dramaturgy. Mistakes are not forgiven, they disappear in a second, and life upstairs is worth very little to you. Those who are upstairs are like a family, all ready to help others and draw the last atoms of their being, but even that is often not enough. It must be played as the mountain determines, everything else is a sure path to death.

Somehow, everything is conjured up so that you can fully feel the power of Everest, the incredible beauty beneath whose surface only death lurks. I especially like some small details, such as when Rob buys the papers, ie. garbage left behind by others. This is especially true when you know that there is a ton of garbage on Everest and that it is one of the big problems that the Nepalese authorities have started to solve systematically since last year. In this way, a contribution was made to that struggle. In addition, through the story you can learn a lot more about Everest and the people who first managed to climb and much more, but all this is shown and told completely in the background and unobtrusively.

Although they started with a realistic presentation, not a spectacle, the story does not lack tension at all. After a slight introduction, Everest draws you into its story and you gradually become aware of the magnitude and dangers of such an adventure. When the rise and drama begins, the tension does not subside until the very end. When the film is over, you stay to think about all that for a long time, and that is the best indicator for me that the film is worth a lot and that it succeeded in conveying what it wanted.

There is nothing to say about photography and landscapes, but to express admiration, which at times turns into awe of Everest, but also of people who dare to undertake this endeavor. The nature is fantastic, with some amazing views, especially from the top. The icy beauty is beautiful and scary at the same time. The already mentioned great acting team fit perfectly into all that great story and the place where it takes place. Although Clark may have the most space as Rob, the others managed to show their greatness in a short time and contribute to this great achievement. I would like to single out the small roles of Gyllenhail and Kira Knightley, but also Brolin and others who are all great.

Everest delighted me with all its elements, the whole story and what it hides in itself. Simply, I had a unique film experience that you have left and that you think about for days after you watched it. When you have a film with an honest human story, which also tells many other, similar human stories, and you also have an cast that will tell that story in the right way and convey the emotions that the film carries, then there is no mistake and it is about a great film achievement.