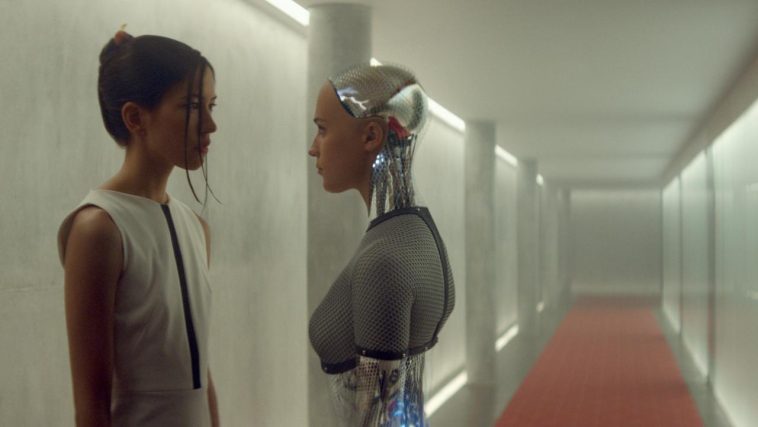 Caleb (Domhnall Gleeson) is a young, capable programmer at the world’s largest Internet company. They received great recognition as the winner of a competition organized by the company. He is followed by a well-deserved award, it is not about some money or plaques, thank-you notes or similar nonsense. He simply has a chance to progress further, so going to an exclusive resort and a week’s stay in the company of the company’s ingenious director Nathan (Oscar Isaac) is a dream come true for an ambitious young man. However, the real reason for coming to a remote area, far from the eyes of civilization, will soon be revealed to Caleb by his director (and one could say a role model). Nathan asks Caleb to take part in the Turing test. He wants a detailed assessment of the capabilities of the latest product of artificial intelligence.

Ex Machina is a difficult film that deals with one topic that every conscious human being is a little hesitant about. Exploring the boundaries between human and artificial consciousness, created by the vast amount of data stored in our computers, cell phones, and other gadgets and devices (which we laymen call machines), carries a certain amount of anxiety. Technological progress is making great strides, erasing existing borders, which inevitably implies questions and makes us think about the possible consequences. The essential question boils down to something about our future in such a constellation of forces, where man and robot are directed at each other, like coexistence in some kind of symbiosis. Is such a future bright, or is there an unwanted scenario that we can hardly accept. If we take a closer look at how people live in modern, urban environments today, it is clear that we have stepped into the new – digital age, enjoying the benefits of high technology.

But all these benefits come at a price. Cameras are all around us, we get disturbing information every day that everything is eavesdropped on, that the notion of privacy is slowly but surely losing its meaning and significance. Garland sets up a seemingly simple story. In an isolated space, he establishes an interaction between three unusual (some would say: charismatic) characters, involved in a game where intellect is the main trump card. The struggle for supremacy does not choose means, so it involves the main actors in manipulations, analyzes them through tests and riddles, deceives with lies and illusions. As usual, we get a winner in the game (there can be only one), which the suggestive direction reveals to us in a subtly created plot.

The main feature of the narrative are carefully designed dialogues, which immediately buy us and win our attention, as well as affection. This is especially true of Caleb and Eve, between whom a relationship is developing that is really difficult to define, at least if we look at things from a conservative point of view, respecting the principles of sound logic.

In this, I can freely say, claustrophobic atmosphere, acting skills are of great importance for the qualitative level of the film. I think that the choice of a small cast was a complete success. It was hard to single anyone out. Undoubtedly, Domnol Gleeson and Oscar Isaac provided excellent performances because they painted portraits of two visionaries in a truly convincing way. At first glance, we understand that these are strong individuals, people far and deep looking into the near future.

Opposite them is the Swedish actress Alicia Vikander, a girl who is stepping forward with firm steps. The dizzying rise in her career was marked by a brilliant episodic role in The Fifth Estate (the daring girl Anka, where her partner was her German colleague Daniel Brill). Eve is undoubtedly a fascinating, sublimating character, and it is understandable why she has caused so much controversy.

When it comes to robots, the question immediately arises as to what extent the production followed it all from the technical aspect. If we have in mind a modest budget, of only € 11,000,000 (otherwise it is a purely British production), I must say that an enviable result has been achieved. Using the space infrastructure of the famous Pinewood Studios in England has proven to be a great solution. The effects are truly impressive and represent reliable proof of how a visually sumptuous film can be made even with a little money.