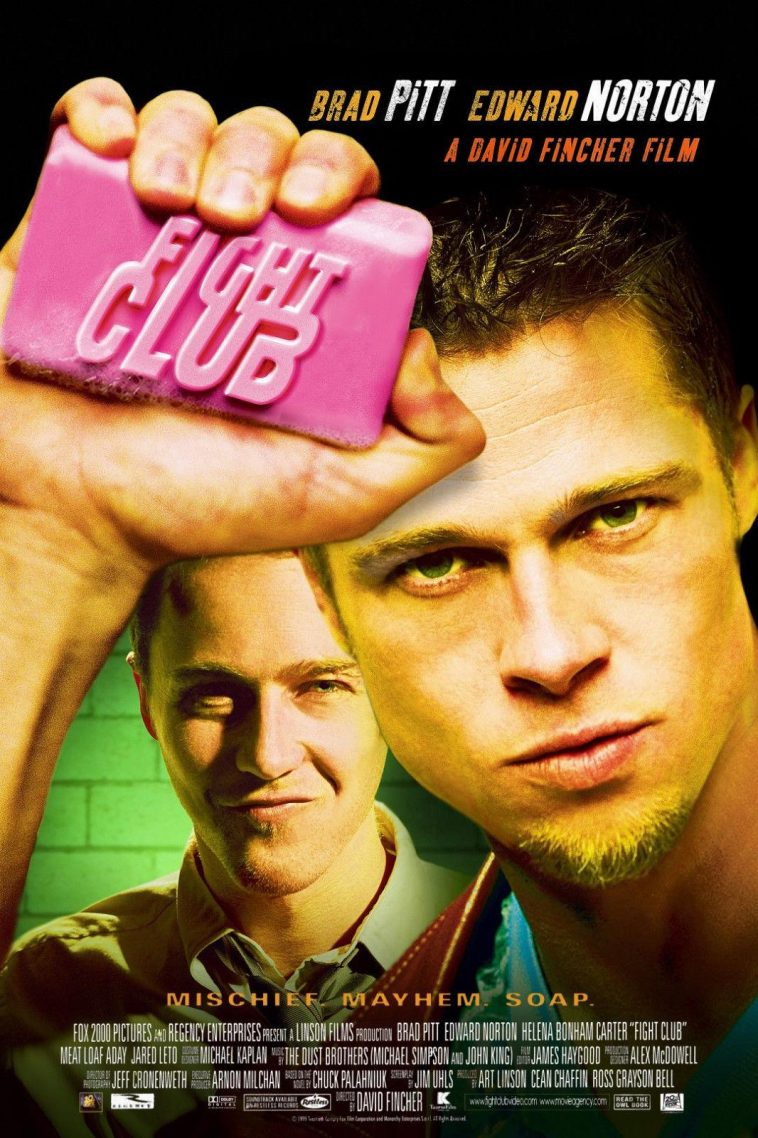 Madness must have prevailed today when I decided to try to review Fincher’s masterpiece and in general one of the most brilliant, most appreciated and most popular films made so far. You can’t say (at least don’t publicly!) That you’ve never heard of this film, because the vast majority of cinema lovers consider it blasphemy of the worst kind, in this case film blasphemy and of course, in their opinion, you have no idea and aren’t complete as a film buff until you watch this a acclaimed film by a great director.

The main protagonist of the story is an ordinary man (Edward Norton), a 30-year-old who is generally dissatisfied with his life, his monotony, and at the same time has problems with insomnia. I must immediately mention that the narrator of the story is unnamed. He falls into a growing existential crisis that leads him to a growing schism within himself. To make things a little easier, he starts attending many gatherings of addicts of all kinds, which mostly happen in the evening, he goes to meetings of anonymous alcoholics, to gatherings of support for people suffering from cancer and the like. At one of these meetings, he meets Marla (Helena Bonham Carter), an attractive but failed darker woman, a woman who is incapable of any decision in life, with the same goal as him. Since they recognize each other, they make an agreement according to which they will not go to the same gatherings, and after a while they become lovers.

Tyler Darden (Brad Pitt) also enters his life, a relaxed cool businessman who makes soap and in his free time has fun doing various inconveniences in restaurants, theaters and similar locations in order to make people’s lives worse. The two soon become friends, and after our antihero’s apartment burns down, Darden invites him to live with him in his almost ruined house until he manages. They are also founding an underground organization called “Fighters Club”, where fights between members take place. At the very beginning of the club’s work, Norton’s character is delighted, fascinated and feels liberated by the idea, but as the club expands and more and more people learn about him, he realizes that events at the club are not harmless, nor the members from whom Darden created a real army.

As I already mentioned, the film was directed by David Fincher, my favorite director, a man who, among others, directed the films Se7en, Zodiac, Panic Room, Social Network and many others. Fincher is a creative genius who has excellent coherence of the sequence of events in each film, there is no idleness and all his films are very interesting and dynamic, the viewer’s interest in the further course of the action does not decrease. In this film, he arranged everything as the greatest perfectionist, there is no jumping off the rails in terms of started and unfinished actions and events. Here, he combined the intertwining of fights and fights for blood with brilliantly performed and entertaining black humor and dialogues on important life topics. The screenplay, which is at least perfect, was written by a certain Jim Uhls based on the novel by Chuck Palahnjuk, who greatly simplified the plot and faithfully transferred it to the screen, only the ending was partially changed in relation to the book.

Definitely the film would not be so powerful and strong without a good main protagonist, in this case my favorite actor – Edward Norton. He merged with the character and presented it so convincingly, that I can’t imagine anyone else in that role. His wide range of different characters played in previous films is impressive and few actors can boast so many different characters. Next to him, we must not forget to mention Brad Pitt in one of the most impressive roles of his career, the charismatic and egocentric psychopath Tyler Darden – convincing, impudent, arrogant, fatal. Helena Bonham Carter is one of the best actresses today who easily transforms into any character she plays, so she did a great job here as well.

“Fight Club” is not just an ordinary social drama with elements of black humor, it is not just a film with violent fight scenes and about men who are dissatisfied with their lives. It is a film about all of us, about an ordinary person and the general psychological agony of disintegration that may eat away at each of us long enough, without us even being aware of it. Perhaps each of us has created an illusionistic image of some wannabe of his life, in addition to the real one that is nowhere near reality. The meaning of life should not be in today’s “survival” of modern man or living, which most of us do today. The message of the film is that each of us should do something about it.

Get moving (don’t start a Fight Club like in the movie!), Change something in your life, maybe at first glance something small and insignificant, but which may later bring you some important item in life that will determine its further, better course.