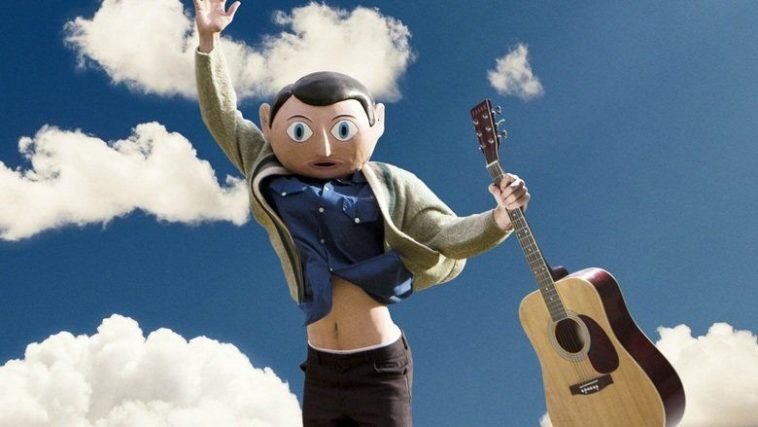 John (Domhnall Gleeson) is an unusual young man with red hair who wants to be a musician – he plays keyboards and tries unsuccessfully to write songs while actually living the life of an average, ordinary man who has a job from eight to four, and lacks creativity and serious music. inspirations which, unfortunately, are not enough. One day, while leaving work, he comes across a scene of a man trying to drown himself in the sea. He finds out that he is the keyboardist of a band that is performing that night in his city. Coincidentally, band manager Don (Scoot McNairy) invites John to join them on the show. However, this is not an ordinary band. It is composed of very eccentric and special characters, most notably the singer of the band Frank (Michael Fassbender), a character with a larger mask on his head that he never takes off. Shocked, John is delighted with the band and, after a few days and an unexpected invitation, he goes with them to a secluded cottage in Ireland where he will create music with them and work on their album. Of course, it will not go as planned.

This film, although many will think, is not a biopic about Chris Savy, but only served as an inspiration for the main character in the film, although the director initially had such an idea. The project is the work of not-so-famous Irish director and screenwriter Lenny Abrahamson, who, apart from two films Adam & Paul and Garage, mostly made short films for which he won a couple of prestigious British awards, and numerous television commercials, but after Frank I’m sure that he will be making a feature film. His previous feature works are black humor dramas and we can say that this is a highlighted motif and theme that is held in his films.

The first part of the film is quite humorous in a nice, fun and unusual way, while the second part turns into a serious psychological drama with strong emotions. It is in this segment that most people are looking for hair in the egg, this transition does not suit individuals and they state that as the biggest flaw of the film. I can’t and won’t agree with them because that segment is the best part of the film. It is unexpected and not a cliché, everyone expects some culmination of humor from the first part of the film, and that does not happen in the second part. Constantly, from the beginning, he has an intriguing dose of mystery because we are constantly waiting to see what awaits us under the mask of the main character.

The film contains a lot of impressive scenes, of which I would especially like to point out the scene in the jacuzzi (personally the funniest in the film), the performance of Frank’s best song and the very end which, despite the upcoming pathos in the announcement, still rises above that and brings us a strong it is not pathetic. The music in the film is almost, so the most important part of the project which, in a way, is a homage to indie bands which, sometimes, despite the quality and other important things, do not get nearly as much attention as they deserve. All the songs in the film are original and made exclusively for the film, except for the song It Must Be Love by Madness and all the compositions were performed by the actors themselves during the filming act which is, you have to admit, commendable.

Great choice of actors all but one, but Michael Fassbender as Frank is a hit par excellence for several reasons. First, he showed and proved that he is multi-talented, I don’t think anyone ever thought of singing so well. Secondly, this role and the budget of the film itself is a very atypical choice for an actor from the Hollywood A list, and that only brings another plus and taking off Mr. Fassbender’s hat. Third, to act almost the entire film with the puppet’s head, and to show much more than some other actors with some pronounced facial expressions, was an impossible thought until this film. Fassbender assured us that anything is possible, although in his case, I am of the opinion that someone else would not even come close to the charisma of an eccentric Frank like him. All the best!

The young and increasingly represented Domnel Gleason, the son of the much more famous, seasoned actor Brandon, was also great and fit into the character of John as if he was just waiting for him – both mentally and physically merged with the character because he is different from others, his striking red hair sets him apart. For the talented Maggie Gyllenhaal, this role is just a step higher in her successful career because she finally got the opportunity to play one crazy guy with uncontrolled outbursts of madness. I must also mention the acting duo – the sympathetic young French actor Francois Civil and Carla Hazard, who is a member of the alternative rock band Autolux, and also worked with PJ Harvey and Jack White.

The film has one of the most important items that I strive for when watching movies, and that is a greater dose of originality, both ideas and realizations. It is very difficult to come across something like this in this difficult commercial, and thus this film only gained in weight and value. If the mentioned elements are not important to you, you probably won’t experience the film in such a positive way as I did. However, just watching a movie on this recommendation of mine will be enough for me, because you will get an unusual movie experience that, I’m sure, you are not used to.