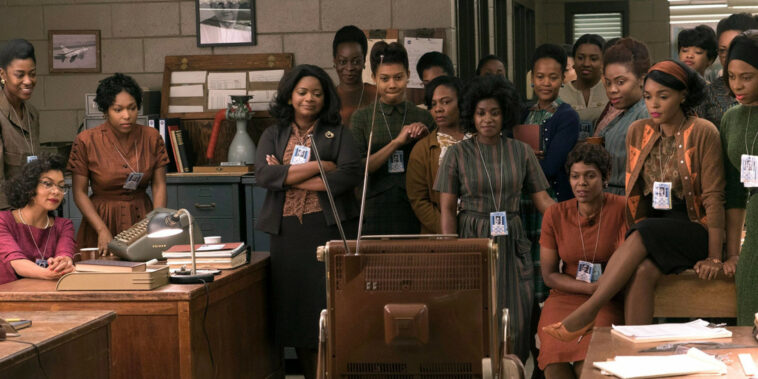 Hidden Figures is a biographical drama set in the 1960s in the still racially divided United States, specifically Hampton, Virginia. The story follows three women, employed in the West Area Computers department of the Langley Research Center, i.e. NASA. Three educated, smart, capable and ambitious women are trying to prove themselves in the world of men as equals, and even ahead of everyone in what they do. The time for such a thing is not very suitable due to stereotypes and the lack of women’s rights, but they do not give up their fight.

Coincidentally, all this is happening at a time when the race between the USA and the USSR in the space program is in full swing and who will be the first to conquer the Star Trek. The three mentioned women are also involved in all this madness, and their knowledge will bring them to the center of the historical stage for one of the greatest events in recent history. As if all of the above is not enough, three women are also black, which does not help them in the least, but on the contrary…

Hidden Figures is a film about shadow heroes. To those people who have done great deeds and are perhaps most deserving of some of the most famous events in history, and little is known about them. Also, this is a film that brings us a human story, with heart and soul. It is a story about many obstacles in life, injustices, but also struggles to overcome and overcome them. This is a story about the human steadfast spirit and what everyone should be, persistent, hardworking, just and never fall before temptations, whatever they may be. A story about dreams and how they can be captured and lived. Also, this is a story about the dark side of humanity, the divisions and injustices we have done among ourselves, based on gender, skin color, status, etc. However, this is a true story, one that inspires and gives us faith in ourselves in every way.

The film was directed by Theodore Melfi, a producer and director known as St. Vincent with Bill Murray. As I liked the mentioned, so is this one, but far more. Melfi took advantage of a great story, gathered a really great team, which responded to it with great performances, and primarily I mean the main trio: Taraji P. Henson, Octavia Spencer, Janelle Monáe, while in the supporting roles were very good and Kirsten Dunst, Kevin Costner, Jim Parsons and Mahershala Ali.

The main trio masters the entire film and captivates each scene with their appearance and performance. Three different characters that bind friendship, and belonging to a certain race, which brings the spirit of the people to whom they belong. All three geniuses in what they do, independent and strong people, show us the struggle and determination in the company of many obstacles, and through all that, some black charm and their way of life is drawn.

Melfi put it all together perfectly and made a film that you will surely enjoy. He avoided pathos, but also excessive drama or seriousness. Somehow he found balance and in two hours he made a great film entertainment, skillfully shot and one that, despite being filled with concrete mathematical and scientific content, manages to remain cinematically entertaining and witty, easy to digest.

The course of the action, although it follows a certain period, does not impose itself as a difficulty in terms of monitoring, and the same is true for the numerous pieces of information in the historical context in which everything happens. I have to say that Melfi did a great job and he managed to put everything that many others would suffocate the film into for the purpose of the story of our heroines. He simply manages to draw you into the story and engages you in a way that catches you commenting often, for yourself, smiling out loud, and after the film you feel somehow happy and satisfied.