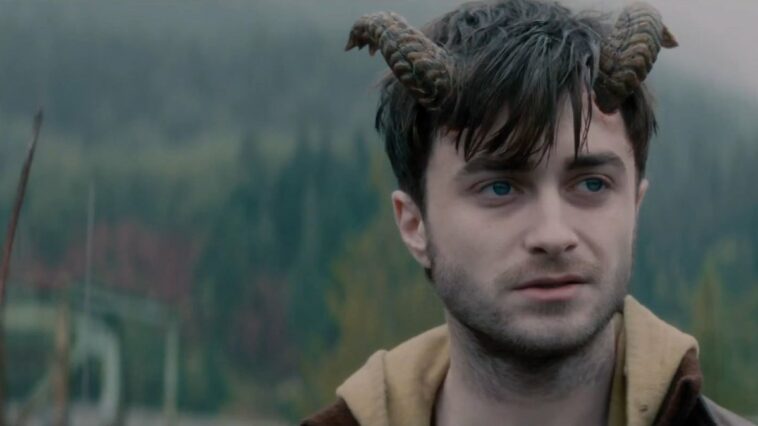 In the rural area of ​​America, in the town of Gideon (reference to one angel), there is a real chase against a young man accused of the brutal murder of his girlfriend. Ig Parish is still at large thanks to the legal skills of his best partner, the capable lawyer Lee. Police tread in the place with the investigation, so the young man goes through agony, indignant that most of the locals are looking for his head, although the identity of the real killer of his dear Merin has not been revealed. At one point, both his father and mother turn their backs on him, leaving him without the most important support he can find only in a close family circle. Tormented by sadness, anger, feelings of helplessness and hopelessness, Ig wakes up one morning and realizes that his horns have grown. As soon as he recovers from the shock, the boy realizes that the horns give him surreal power. Namely, he is able to find out the darkest secrets, deeply hidden frustrations and twisted desires of his fellow citizens. Ig accepts horns as a blessing that will help him solve the mystery and find the killer…

Joseph Hillstrom King (Joe Hill) was a success with his first novel, especially in discerning readers, recalling the old saying that splinters do not fall far from the stake. The son of the famous Stephen King, a talented American writer, he immediately received recognition because his literary debut was adapted on the big screen. From the literary template, screenwriter Keith Banin developed a multi-layered story through which motifs, ideas and symbols closely connected with biblical iconography run. The sensitive issue was to choose a man who will have enough creative energy, fresh ideas, a clear vision to turn a literary work into moving images in the right way. To reconcile the art form, but also to meet the expectations (commercial aspect above all) of the ambitious production company Red Granite Pictures.

French filmmaker Alexandre Aja accepted the challenge. I say challenging, because the narrative is difficult to determine in terms of genre, considering that it mixes elements of thriller (if we start from the basic setting), horror (mysterious murder), fantasy (the appearance of our anti-hero for the most part), love drama (sincere emotional connection established) since childhood), but also comedies embodied in the form of finely dosed sequences of black humor, with effective satirical additions (especially in the first part). I have to pay tribute to the young director (this is conditional, because he was born in 1973) because he managed to mix all these ingredients into a harmonious whole, quite coherent, with the timely use of always welcome flashbacks (almost inevitable today).

It is fair to point out that part of the credit also goes to the support staff in charge of providing every possible logistical support. Extremely atmospheric action was achieved by the wise choice of locations in the Canadian province of British Columbia (Vancouver and surroundings). A precise photograph should be added here, which is why the visually lavishly set scenography catches the eye.

I am of the opinion that without good acting, we would not get an impressive film reading. The metaphor-filled narrative presented in the religious subtext requires an adequate performance, because only in that way can it hit the heart and touch the soul. The boy wizard is slowly but surely emerging from the shadow of a role that changed his life forever. Daniel Radcliffe carefully chooses roles in genre-diverse projects, proving to be a young actor capable of meeting all the challenges of the media-exposed profession. He sovereignly presented the title role, despite the fact that he did not have an easy task. Experience from practice teaches us that whenever we touched on religious topics, the attention of the general public increased rapidly, and the comments of church officials were especially carefully followed.

Why is acting one of the main trump cards of this refreshing movie cocktail? Because Daniel had great support from his colleagues. I would not like to list them now, except to emphasize how Juno Temple bought me in advance for the next few films in which she will act. It is a well-known fact that there are no problems with taking off in front of the camera, but what fascinates me here is the ability to unpretentiously paint a complex character, altruistically, with a lot of warmth and developed compassion for others (gentle female soul).