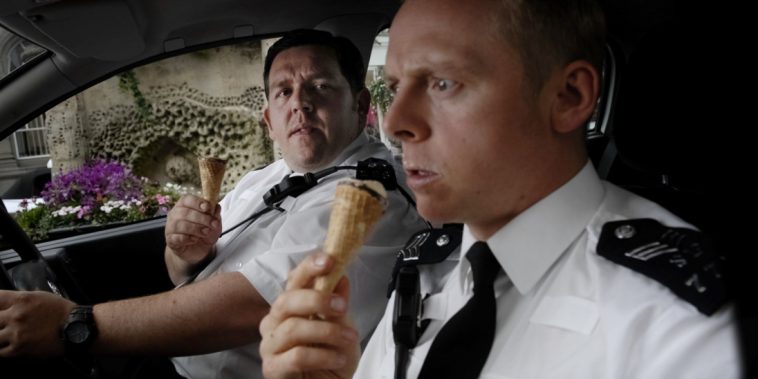 I mentioned in one of my earlier texts that I have the sick trait of postponing films, storing them and cataloging them in the subconscious by genre, atmosphere and quality (based on the few or many things I already have about it, of course), and then when the shape of the film without pushing falls into the mold of my mood, to wipe the dust off it, look at it and write a review about it. This time it was not so. Hot Fuzz, like many other beautiful things in my life, just happened to me, without premeditation and foreplay, and after 120 minutes of action, absurdity and total madness, I didn’t know why it took me years to put this on the shortlist to watch. First of all, I have to say – Simon Pegg, you are good, very good. You’re good, because your performance is fun, because you’re also the co-writer of this movie that made me laugh once and, in the end, because Shaun of the Dead.

Now that we’ve cleared that up, let’s get to the store. Peg is Nicholas Angel, a London police officer with extraordinary career results, a rising boy who unexpectedly gets a transfer from the metropolis to the villages of Sandford. It’s the first fifteen minutes, more or less, but it’s not the usual fifteen minutes. Do you remember the multi-orgasm you felt while watching the video for Liberian Girl for the first time, and all those “woe!” And “see him” or “he’s here too”? an important part of Hollywood at the time? It can be said that the celebrity factor is a bit thinner here, but it is still great.

I will not spoil the atmosphere because I think it is one of the many trump cards that Hot Fuzz offers – I will just mention that connoisseurs of the British comedy scene as well as film lovers will enjoy recognizing dear faces. I will give hints for a few of them – The Hobbit, Bond, Tristram Shandi. Plus, even if you pay full attention to the characters.

Sergeant Angel spends his rural days getting to know the locals and performing not very hyperactive and overly serious actions, such as catching a runaway swan, which due to the seemingly peaceful nature of the village is the only job of the local law enforcement officers. Until one night the unsolved murders begin – Angel, with the help of Danny (Nick Frost), the son of the local police chief, tries to unravel that tangle of crimes, but every clue leads to a dead end. Will the silly tandem manage to take the cloak off the perpetrators of these crimes before the members of the Village of the Year jury arrive in Sandford?

This unusual parody of “police” and buddy-buddy detective movies and series is not just a comedy. It is universally likable, it is equally enjoyed by old and young, male and female. This realization, like Shaun of the Dead, manages to surpass its parody of the genre and become even its quite acceptable representative, perhaps in a slightly crazier way, but still a representative. Personally, I think that Hot Fuzz is, moreover, a better and more complete film than that zombie comedy from 2004.

I can justify all the objections I have to some extent. Directing, although mostly good, at some point irritates with short cuts and close-ups, which, I understand, is again a mockery of genre clichés. There are too many characters, some of whom are quite memorable and I understand that – we need to understand the breadth of the rural community. In the end, it is not clear to me why all those visual representations of the body over which the crimes were committed were needed, all that blood and so on – it is probably some kind of mockery again, only that one could absolutely live without it.

It may not bring anything overly new in the film category at all, but it is a real refreshment in the comedy category, not to mention the parody subcategory. If we close our eyes to some minor omissions, Hot Fuzz will entertain us unusually, and, given that it is full of details, there is a good chance that we missed something after the first viewing, and we will return to it in the future.