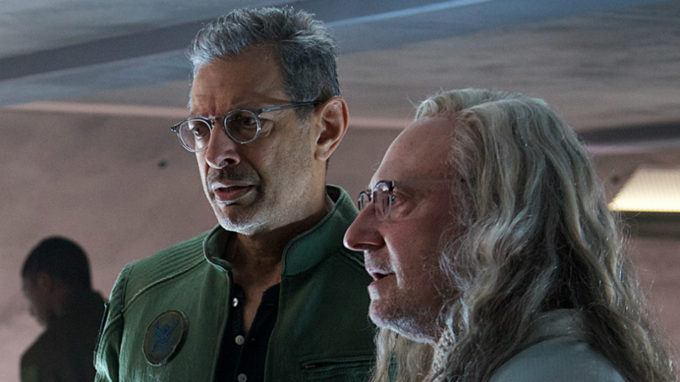 Independence Day had everything a real, purebred blockbuster should and must have: an interesting and entertaining story, interesting and entertaining characters, developed in the right way for this type of film, cast and effects, not self-contained, but to some extent until then unseen. So it was with this. The story is great, full of perfect doses of action, comedy, drama and great entertainment, wrapped in the outlines of a disaster film and all that is imbued with phenomenal visual effects, hitherto unseen. The cast, a special story, with the great Will Smith, Jeff Goldblum, Bill Pullman, Mary McDonnell, Vivik Fox and the genius Randy Quaid. One of the movies I’ve watched many times and I can still, never get bored.

Twenty years later, they came up with the idea to make a sequel, as if for some jubilee. Directed again by Emerich, many actors from the first one supported him, but not Will Smith. Regardless of that, I will freely say, great shortcoming, they started to make a new Independence Day. This time, according to the trends, he decided to make it bigger, more glamorous, noisier, more popular, faster and all that, so he hired young famous actors such as: Liam Hemsfort, Jesse T. Usher, Maika Monroe, as well as some older ones. , William Fitchner, Stella Ward, etc. He also raised 165 million dollars for the budget and started machinery.

I must say that, given my sympathy for the former, I eagerly awaited the latter. It happens, quite by accident, that I have the opportunity to watch the premiere in the cinema in a 3d version. Happiness never ends. Popcorn borrowed, squeaked and left. Some two hours later, a pale impression and a strong sense of lost time.

The story takes place twenty years after the attack, ie. the invasions of aliens on our planet Earth and their relentless comparison of world landmarks in which we, at least visually, enjoyed so much in the first place. Humans have mastered alien technology, real bases on the moon. The world lives in love and prosperity, etc. However, the lights are on on the only spaceship that landed in Africa. Dr. David Levinson (Goldblum) goes to see what is happening with the ship, which is otherwise under the control of the War Chief of Umbuta. It all happens hours before the big celebration on July 4th. As new information arrives from all sides and through the hanging story of the main characters, one thing is for sure, something terrible is being prepared…

Ronald has good films, dear to me, but also those that are not, and he is considered the king of the Catastrophe Film. Man simply likes to destroy our planet in various ways, and he often succeeds in that. However, I don’t think it’s even close to success with this film. The first comment after leaving the cinema, with a colleague with whom I watched the film, was that the film was completely unserious. A colleague had the same impression. Not frivolous in a humorous sense, but everything is somehow frivolously set. The old pattern was taken, and then it was inflated to the maximum, so much so that everything that adorned it was distorted.

They inserted a bunch of characters, each with their own story, and not a single one worth paying attention to. There are five characters in charge of humor, of which there are usually one in films like this, and none of them are fun. Cities have leveled off, billions have disappeared. The superior force stepped on the ground, and then, due to circumstances, instead of leveling it all nicely, they decided to get out of the ship and slap him on the fists. The whole story is simply frivolous and superficial. Of course, many will say, as I often say about blockbusters, what the story has to do with films like this. However, they exaggerated here with no story.

The effects are also inflated, everything is bursting in all directions, everything is exaggerated, including the ship that covers almost half of the Earth. And aliens have grown, and so have their weapons. An hour goes by, some shooters, some lasers, without any sense, and everything is adapted to probably all ages, so it all looks like a cartoon.

There is simply not a single thing that I would grab and say, this is fine, this is good and worth it. No. I just suffered those two hours and watched as something great, dear to my heart was taken and made into a monster. I guess its creators were guided by the thought that they would turn big money on nostalgia, on the jubilee, which may succeed, although I don’t believe it.

So from delight to disappointment is the shortest way to describe this film. If you want to watch a nonsensical story and spend two hours watching the plowing of the Earth, shooters, without getting involved even more seriously, this is the ideal movie for something like that. In any other variant, strict avoidance. You can spend two hours in a million and one better way.