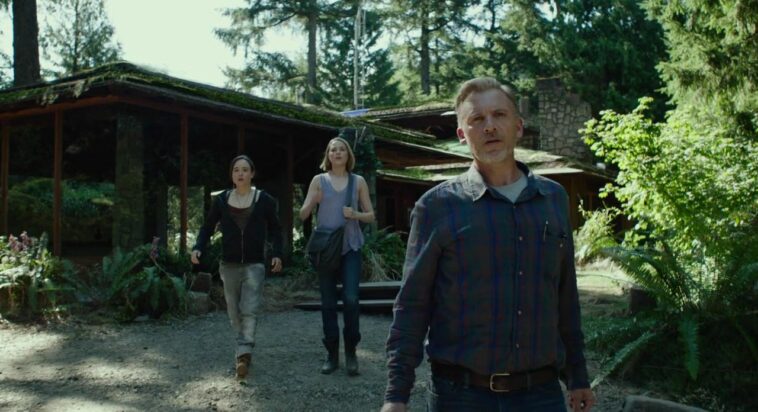 Into the Forest is a sci-fi drama, with an emphasis on the latter, although in this case one cannot do without the other. The store is located in the near future, recognizable by some gadgets, ie. pieces of technique. The story follows a father (Callum Rennie) and his two daughters Nel (Ellen Page) and Eva (Evan Rachel Wood). They live in an ancient forest, in a beautiful wooden house that is kilometers away from the nearest town. While her father takes care of the household, Nell is preparing an important exam for college, while Eva is rehearsing for the upcoming audition, which can be said to be a turning point for her further career as a dancer.

It is clear from the beginning that the family is licking their wounds in peace, after the death of their wife, ie Eva and Nella’s mother, due to illness. While everyone is recharging their batteries, suddenly one evening there is a power outage. What they thought was a small failure will degenerate into a catastrophe, and they will have to find the strength within themselves to cope with the many challenges and difficult times ahead.

Indie film with all its magic. The director (Patricia Rozema), about whom I know nothing, did a great job. In a limited set, with only a few actors, she told us a story, very interesting, tense and strong. Although we are watching, almost not, a theatrical setting, the film is not boring at any moment, but on the contrary, it constantly fuels up some tension, anticipation, malice that floats in the air. Everything is set so that the circumstances in which the action takes place keep us in a state of readiness and, as time passes, different scenarios unfold in your head about what could happen or happen to our heroes. This is exactly the power of films like this, everything is set and you are expecting some of the possible scenarios, and in fact the story takes place from a completely different angle from all these circumstances.

It is in that side track, the cornerstone of all your expectations, that a story about growing up, sobering up, a story about today’s world, about today’s people takes place. The story of how much man, in fact, became alienated from nature, how much he became envious of his creations, technology, everything he created to make his life easier. It is true that all he has done in the last two centuries has been making his own chains and going into voluntary, unconscious slavery. Slavery, not to someone, but to the material. All this was told to us in a very interesting and clever way, slowly and with understanding, as they say. The little things in this story, just a short line of text, a short scene, an event, unrelated to each other at first glance, strike so hard, clearly and loudly speaking the very essence of the story.

At the beginning of the film, while Nell listens to a lecture on the state in which a person falls immediately after amnesia caused by something, we learn that then a person begins to live a completely different life than before. He adapts to the new rules unconsciously and develops a new personality, or peculiarity. This is exactly the situation our heroes are in. We view them as individuals with developed affinities, desires and abilities. Then there is a break in their reality, caused by the disappearance of something we take for granted. In this case, electricity, the disappearance of which destroys the entire human civilization. It just reveals how much we are slaves to what we have created and how fragile the foundations of our civilization and existence are. Our heroes are in complete confusion. Everything they knew now does not exist and they need to return to a life they do not know, and how people have lived for thousands of years. We need to go back to nature.

This transformation of them from technologically dependent individuals, towards that primordial human existence, was phenomenally shown by our heroines who interpret Ellen Page and Evan Rachel Wood. The great roles of them, as well as the whole team, only complete this interesting film.

Into the Forest speaks in a clever way about today’s world and people, about the phenomenon we created a monster, about a world built on imaginary foundations. When these foundations disappear under pressure, the only thing left for us is a primordial return to nature.