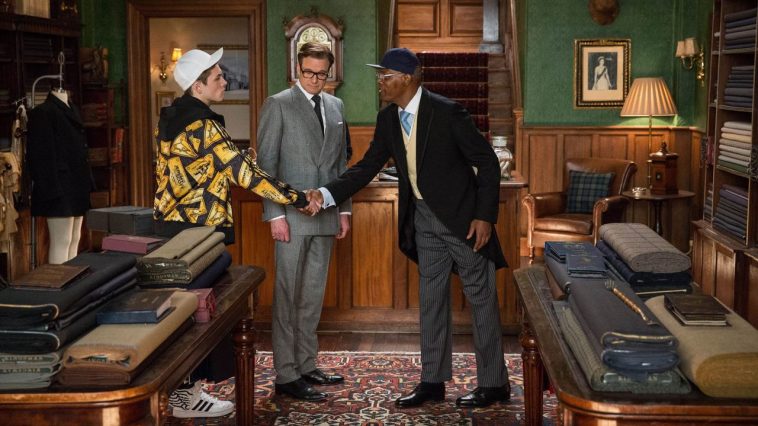 Gary Exy Anwin (Taron Egerton) is an unadapted young man who has a problem with authority. He can’t stand the guy his mother lives with, he easily gets into trouble and it seems that he is still looking for the true meaning of life. He lacks someone who would channel his accumulated energy to the right place, help strengthen his character, move him from lethargy and direct his youth towards some lofty goals. Everything changes when he is taken under his wing by the mysterious Harry Hart (Colin Firth), a colleague and friend of his late father, Agent Lancelot, who died on a spy mission in Argentina (

From the well-known Matthew Vaughn (X-Men: First Class, 2011) comes an extraordinary blend of action and comedy, shot in the manner of a modernized version of the world-famous franchise about the adventures of James Bond. Inspiration was found in the comic book The Secret Service, designed by Mark Millar and richly illustrated by Dave Gibbons. Jane Goldman’s faithful collaborator was of great help, because the woman worked hard with the director to create very interesting characters. Each of them has their own motives, justification for the actions and goals they strive for, and most importantly, it all makes sense and generally has a spirit of authenticity, when you step a little deeper into the world of espionage.

It is unequivocal how thoroughly the plot was made, because, as usual, someone appeared with the intention of conquering the world. The idea of ​​establishing absolute control over different types of communication does not sound bad at all. It is enough to look at the fact that today there is a real mania for technical and technological innovations, to live in an artificially created dependence on the Internet, mobile phones and other high-tech innovations. If we add to that numerous references to spy classics skillfully inserted into the context of the story, it is evident that a lot of work paid off.

The ideas of the film crew got the desired contours in the form of a compact whole, and that certainly leaves a strong, positive impression. Of course, he has the potential to hold our attention and win our affection to the very end. Kingsman: The Secret Service has its trump cards. The first thing that catches your eye is that the subgenre (the so-called spy film) is parodied here to the limits of good taste. At times, he is realistically serious and subversive, and in the next scene, he is hilarious and sympathetic. I would add that he is also shockingly violent (the scene in the church is twisted, imbued with a black humor note).

Vaughn maintains the necessary dynamics thanks to a long-tried narrative pattern, with many more or less important protagonists. Some are his allies, and others stand in his way, as a dangerous threat to all humanity. It is true that the story itself does not have anything original, nor is there anything else that would set it apart from the mentioned subgenre, but the approach itself is essential. The director subtly paints portraits of agents in specific circumstances, where strict discretion reigns, as a basic principle of their way of working.

The cleverly made casting certainly had a significant impact on achieving the desired atmosphere on the groundbreaking spy stage. After a short break in his career, Colin Firth provides an inspired performance as an agent, but also a mentor to a young man when he recognized the huge potential for a dangerous profession. The combination of deadly martial arts, with a pronounced British sense of humor (where cynicism and sarcasm are required), and a shyly accentuated missing father figure in the main story, made Harry Hart, or rather Galahad (the code name of each operative), a striking character. to which it is difficult to remain indifferent. And what about the evil, sickly ambitious tycoon, played by the experienced Samuel L. Jackson. Valentine is a worthy rival to the secret spy organization, and he fully deserves such a finale.

Among the episodes, it is worth mentioning the character of the dedicated operative and pedagogue – Merlin, when he was excellently portrayed by Mark Strong, which is undoubtedly a real refreshment for the audience used to seeing him as an antagonist of positive characters. Don’t worry, I haven’t forgotten the guy around the shop. Egzi is portrayed as a rebel with a good heart, extremely intelligent, able to learn quickly and to shrewdly judge who can help him. Taron Edgerton is undoubtedly the right choice for such a character, and it is certain that Kingsman will launch him into a stellar acting orbit. He has that positive attitude, and at the same time he seems relaxed, not as stiff as the voice of most Britons. She proved to be great as his partner, the young Sophie Cookson, because Roxy is a girl who has so many similarities with Egzi.

The lavish production provided a series of fascinating shooters, fights, chases and other accompanying details that adorn this hilarious spy story. I would especially like to single out a wide range of spy gadgets, starting with umbrellas, pens, shoes, suits, etc. This gives the narrative a recognizable aroma and gives it a slightly retro look, since similar devices were used by Connery in creating the character and work of the unsurpassed agent 007. Phenomenal musical support has been present since the introduction, when we listen to their mega Dire the popular hit Money For Nothing, which is in a way a homage to spy movies that had their golden age in the 70s and 80s of the last century.

Normally, costume design is not neglected either, because it is an integral part of training and acquiring manners that are possessed by members of high society, and without a good suit, such a thing is simply not possible. We owe it to the skillfully done editing that the action scenes look spectacular to us, and it is worth emphasizing the precise work of the camera, because it provides the necessary logistical support.