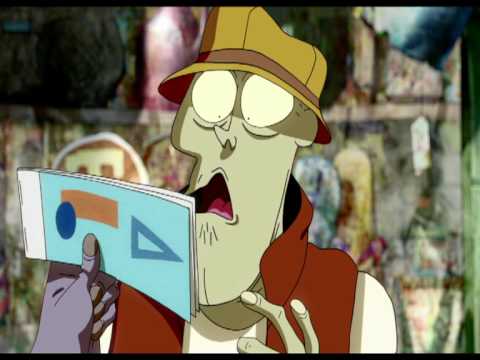 French cinema has always produced quality films in almost all possible genres. These films are known for the specific mentality of the characters, interesting language and an extraordinary sense of beauty, but for most film lovers, the fact that the French also work with animated films was unknown. Quite by chance, I came across one and without any expectations, I decided to look at it. I was thrilled.

The story is set in a Parisian ghetto full of petty criminals and drug dealers. Here we meet two protagonists, Tony and Jose, whose only goal is to raise enough money that summer to go on vacation to an elite resort. Due to the circumstances, one of them loses a larger amount of drugs, while the other is employed by a very strict judge as a caretaker for a week. Among the many things they encounter in their adventure to fulfill the goal are Tony’s pathologically jealous girlfriend, the judge’s dog, the judge’s daughter Clemens, a team of porn filmmakers, drug dealers, as well as numerous friends and police officers from their environment.

This rather original project is the work of relatively anonymous authors who have nothing great behind them or have too much experience with feature projects, and therefore this film must be appreciated even more. The scenes and landscapes themselves are drawn in the style of ghetto graffiti, they exude creativity and quite convincingly evoke the environment and atmosphere. The dialogues are hilarious, characteristic of the usually unemployed youth who are torn between desires and possibilities. Some situations are quite absurd, but hilarious. The script is great, the story makes sense and the only drawback can be the very fast French language, which cannot be conjured up enough with the translation. The animation is great, as is the sound.

“Barabe” is more intended for older audiences and is not a typical “cartoonist” as can be concluded at first. He has a certain amount of criticism of the police and the judiciary, and warns of great corruption in French society. The whole story is accompanied by a large number of rap and hip-hop sections with socially engaged lyrics. The team that borrowed the votes is big and they did a great job. I must mention Vincent Cassel, who obviously, like the whole team, had a great time during the filming, and his best friends are Diane Kruger, as well as Gilles Lellouche, who lent his voice to a dangerous drug dealer.

If you are a fan of animated films, French language, hip-hop culture and good entertainment, this is the right film for you. It is interesting, with specific humor and top quality animation and drawings. Recommendations for watching.