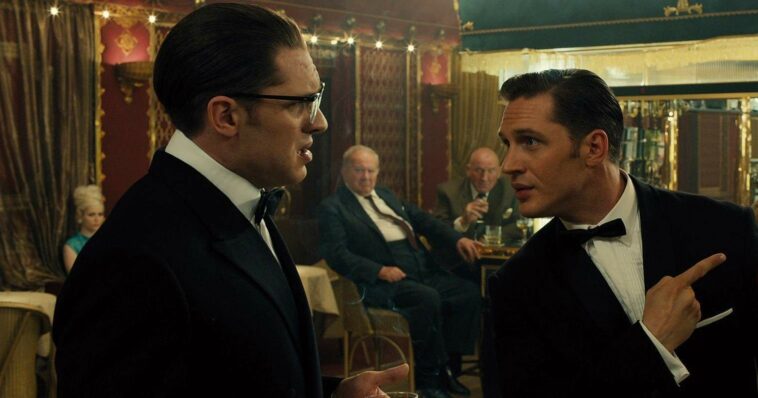 Tom Hardy has recently gained the status of a great actor that audiences love to see in movies. The fact that in the latest project of the famous director and screenwriter Brian Helgeland plays two roles, twins Ronald and Reggie Cray (they also have an extensive text on Wikipedia), is one of the main reasons why people have paid so much attention to this work. the main reason I gave him a chance too. I was looking forward to the screening of this film with great expectations, but the final impression is far from superior.

The Cray brothers are famous British gangsters who roamed East London during the 1950s and 1960s. With excellent connections in politics and the upper class, primarily because of their popular nightclubs, the Craves gained the status of untouchable and dangerous criminals who hid behind the screens of successful businessmen. In this film, the emphasis is on the relationship between Francis Shea (Emily Browning) and Reggie Cray and it is told from her perspective. In addition to their relationship, Francis talks about the mentally ill Ronaldo, the relationship between the brothers, as well as their rise and fall in the gangster world of London.

As I have written many times on the site, I am not a big fan of narration in the film. Choosing Frances as a narrator is somewhat understandable to me because she was more or less a connoisseur of opportunities in the world of Cray, but that is why we were deprived of events before the acquaintance of her and Reggie, which are at least as interesting as the events we saw in the film. . Due to her important role in this project, we have no insight into their youth, growing up, boxing career, more detailed specific relationship Cray has with his mother, their beginnings in the world of crime, and how they came to become the owners of the first nightclub. If you are interested in more details about these people, watch the movie The Krays, you will be deprived of a lot here.

If someone asked me what this film is about, my answer would be Reggie’s efforts to calm his brother Ronald, who is struggling with several mental illnesses that make his condition dangerous for business, their status in society and their lives in general. . The numerous troubles that Ronald brings them to literally drive Reggie crazy, who refrains from harsher measures towards him just because he is his brother. Due to the presentation of their relationship, other things have been pushed aside to some extent, so we do not have a complete insight into their criminal activities. In addition, there is the relationship between Francis and Reggie, which is another important content of the script, which also entails less action, twists and some excitement in general. Precisely because of the lack of excitement, it seems to you that the film lasts longer than it really lasts and there is often a drop in concentration.

Legend has good things, but they are very poorly composed. At one point, you see a scene worthy of Guy Ritchie, Tarantino or Martin Scorsese, which in the next scene is killed by melodrama or romance with Francis. I am aware that Reggie’s relationship with her is important for his life, but I believe that not many people would complain if that relationship was pushed aside at the cost of some more exciting events. In addition, the director gives the most basic account of political and gangster relations in London, but he did not elaborate on them too much. A lot of good scenes have been invented or changed in order to raise the quality of the story, which can also turn away fans of true biographical dramas. Also missing is the character of Charlie Cray, their brother who was an important member of the team. The good thing about the film is that it does not glorify the twins, but presents them as they are.

There is no need to waste words on Tom Hardy’s acting. A lot of people agreed that he is the most important link in this film and everything would be much worse without him. His performance keeps the whole film together and the fact is that a lower quality actor would finish this project. His performances are most reminiscent of the role he played in the film Bronson, considering that he also played psychopaths in that film, who are convinced that they are much more than ordinary criminals. Emily Browning’s role is quite irritating, but her sympathy and the effort she put in make it not completely repulsive. From the constellation of great supporting actors, I single out Paul Anderson, Arthur from the top series Peaky Blinders, and David Thewlis.