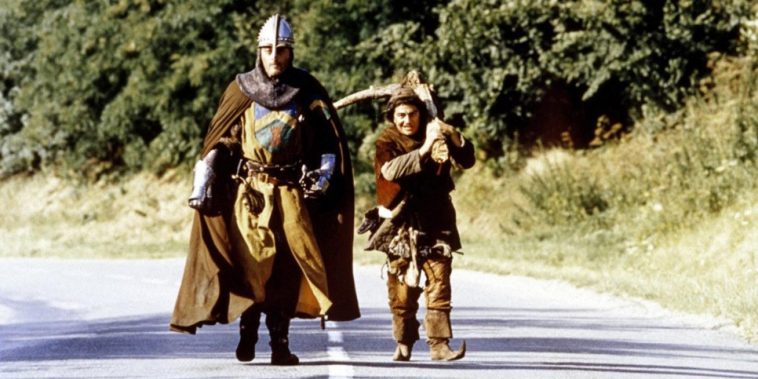 You may have noticed that in some earlier reviews, when it comes to comedies, we have often been of the opinion that good comedies, except for a good sketch that runs here and there, have not existed for decades and that the general situation is catastrophic when film humor is in question. However, when it comes to the French comedy “Les Visiteurs”, our attitude is completely different and this film is one of the few achievements that makes us bite our tongues when it comes to the mentioned topic. In general, French cinema is one of the few that can match Hollywood in many aspects, while in terms of humor it is probably more dominant, at least from the point of view of our mentality. The specific “taste” of French film in many segments often seems to be of better quality than Hollywood or at least visibly different, although in terms of quantity it is far below it. In any case, the sci-fi comedy “Les Visiteurs” is an achievement from which American filmmakers could learn a lot.

The film “Les Visiteurs”, directed by Jean-Marie Poiré, is an extremely interesting combination, conditionally speaking, of science fiction and comedy. Poire is also known for the excellent, very genre-wise, realization of Les Anges gardiens (Guardian Angels), from 1995, as well as for other sequels of Les Visiteurs. The story of the visitors follows the characters of the Count of Montmirail, Godefroy de Papincourt (Jean Reno) and his servant Jacqueline la Fripuilia (Christian Clavier)

The very beginning of the film is set in medieval France in 1123. On the way to his future bride, Frenegonde de Puil (Valérie Lemercier), Godefroy, under the influence of a hallucinogenic drug set up by an evil witch, accidentally kills his future father-in-law.

To correct this fatal mistake, Godefroy turns to the wizard Eusebius to send him into the past, just before the fatal murder event. However, instead of going to the past, the wizard mistakenly sends Godefroy and his servant to the distant future, more precisely in 1993. The heroes of the film reach the world of modern France, which is completely unknown to them thanks to the time and cultural difference of 800 years. At the same time, this difference is the main source of humor in the film, as well as the main reason for the pile of troubles that these heroes constantly fall into, in an attempt to find their way home.

In the foreground, we would primarily draw attention to Christian Clavius, who, in addition to the role of a servant, also found himself in the role of his distant descendant, a shade less interesting to Jacques Henry Jacquard. Klavije’s presentation of this film is practically ingenious and probably one of the most interesting acting achievements of the last decades, when it comes to comedy. Just remember how popular his “oket!” a replica from this film. On the other hand, Jean Reno, although the main actor of this achievement, is not noticed to the same extent as Clavier, which is probably contributed by the less interesting character. Not to be confused, these are nuances when it comes to the quality of acting, and Reno certainly played the role of a medieval knight, which he performed in an extremely interesting way.

The only character we subjectively did not like in the film is the bum Jinette la Kloshar (Marie-Anne Chazel), who, we wonder, would probably be removed from this production, but objectively speaking, this character is not completely unnecessary in this story. Zinet actually helps to identify the medieval character in relation to the criteria of the new world.

Time travel is definitely one of the more attractive themes of science fiction, and in the case of this film it is definitely a hit for a good story, which in combination with great humor makes a unique film achievement and an unforgettable experience for the viewer. We believe that rarely anyone has not seen this film and it certainly belongs to the achievements that can be watched more than once. Also, we should not ignore his somewhat weaker sequel Les visiteurs 2: Les couloirs du temps (1998), but when we talk about the film Just Visiting (2001), the so-called in the third part of this franchise, things are not the brightest.

Namely, “Just Visiting” is mostly a repetition of the original film and mostly represents the adaptation of this film to the American audience, so many humorous scenes fail and seem forced, which was to be expected, but hand on heart, this film is not a complete disaster .