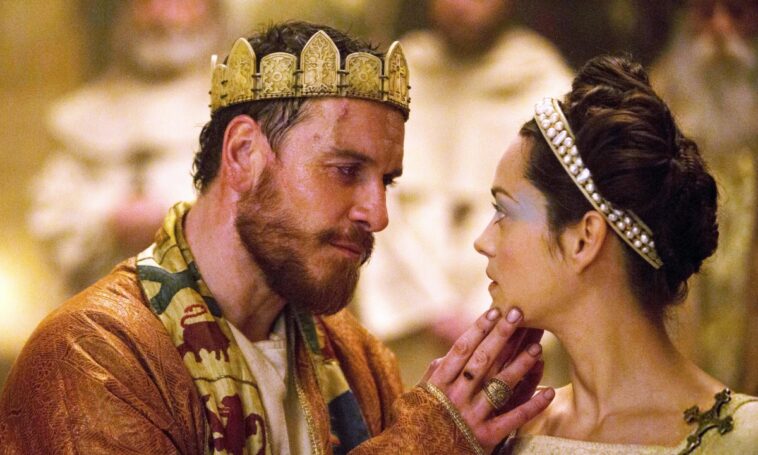 The film opens with the funeral scene of the child of Macbeth (Michael Fassbender) and Lady Macbeth (Marion Cotillard), and then the plot moves to a battle between the Scottish Royal Army and the rebel army, in which Macbeth as the king’s commander wins, but with great losses. At the very end of the battle, three witches approach him and predict his fate, saying that one day he will be the king of Scotland. Macbeth, influenced by the ambition and persuasion of Lady Macbeth, decides to take matters into her own hands, so she plans to come to the throne by force.

We are all more or less familiar with the main themes of this story (ambition, murder, madness, tyranny, revenge), with the fact that the author gave the characters Macbeth and Lady Macbeth an unexpected depth. Even if you haven’t read the play, you will quickly connect with it, you will easily feel the emotions of the characters, the story will really seem true and you will be moved to the harsh world of medieval Scotland.

Shakespeare’s text is a set of carefully chosen words of high artistic value (primarily I mean the speeches of the characters) and the script relies entirely on it. The characters speak the original text, so there is no improvisation or additional sentences in the film at all, which will lead to the impression that you are watching a theatrical play set in an incredibly convincing visual ambience. Honestly, I did not expect that the screenplay would be so faithful to the material and, as beautiful and interesting as it may be for fans of literature, it can somewhat tire the viewer, especially in combination with the very slow pace that accompanies the film.

The cinematography is at an extremely high level, and this is especially evident in the scenes during the battles. Macbeth combines slow and long recordings, slow scenes and gloomy landscapes accompanied by a great musical background, which all together create an authentic, convincing, violent, unstable atmosphere. There are also several scenes shot with a hand-held camera, and special effects were used (more or less unnecessarily). I also liked the scenes in the castle, which seems to be a royal splendor, and it is half-empty, naked, cold and repulsive. I understood it as a metaphor for a psychiatric hospital in which there is a paranoid man, whose madness does not allow him to see the real facts.

Michael Fassbender is proving more and more what kind of actor he is every year. Only ten days ago, I saw him in the movie Steve Jobs, in which he delighted me, but here he may have surpassed himself. I am of the opinion that the more difficult task is to convincingly present all the thoughts, emotions and motives of a person we know only the most basic, than, conditionally speaking, to imitate a famous person. In this film, Michael very convincingly represents Macbeth, a man sick of ambition who was turned into a tyrant by the government. Macbeth 5 Sympathetic Frenchwoman Marion Cotillard is excellent as Lady Macbeth. She presented her in such a way that she can be considered the main character with Macbeth, it is simply impossible not to feel pity for the woman who became a victim of the king when she practically created it herself. A plethora of great British actors have starred in the film, and I would single out David Thewlis as King Duncan and Paddy Considine as Bank, Macbeth’s comrade-in-arms whom he later considered a traitor.

The latest film adaptation of Shakespeare’s play was presented as a slow art-house drama, very true to the original material. With great acting and an interesting choice of visual representation of that world, Macbeth can be great for patient viewers and admirers of William Shakespeare, while most viewers will consider it a monotonous and extremely predictable film.