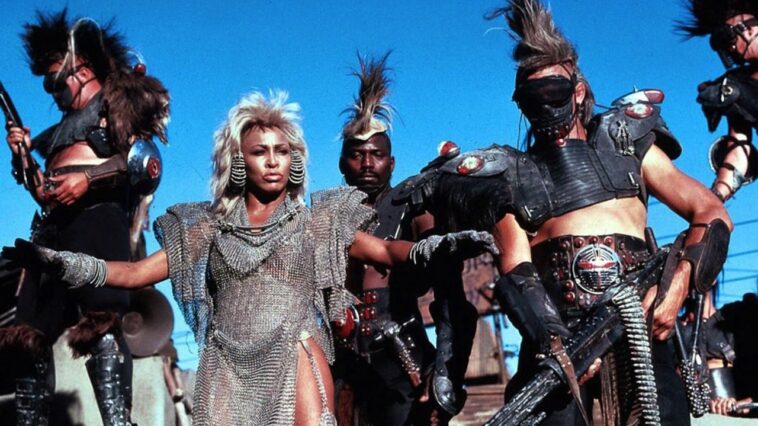 Beyond Thunderdome is the last adventure of Max Rokatanski, a road warrior created by George Miller. The last one, of course, when we talk about the original trilogy, and the last one where Max plays Mel Gibson.

Thirty-seven years have passed since then, but Miller’s masterpiece shaped into a trilogy has not lost any of its great splendor. Watching all three films, I would say the first is the crudest and most brutal. The second, personally the best, kept the rawness of the first, but it is more balanced, enriched and everything is put together in such a way as to provide a unique film experience. The third, although great, in my opinion differs from its Hollywood commercial, which can be seen in the very approach that Miller had when making this film, and that is mostly reflected in changing some basic things in order to bring the project closer to a wider audience.

Miller went even further into the future and presented the world to us as a lifeless and endless desert. Max, a road warrior, is still roaming that desert, without any special goal, except to survive until his last hour comes. However, fate has other plans for him. So, after meeting the robber, the road takes him to the town of Bartertown in the middle of the desert, and there begins another incredible adventure…

Using his tried and tested recipe from the previous two parts and a generous budget, Miller made the third part in the style of big blockbusters. I think that everything is on a higher level, locations, extras, costumes, techniques, etc. In my opinion, he masterfully took the story from the second part, upgraded it a bit, enriched it technically and made a film that will last for decades. In that process of blockbuster, we had to resort to some things that will bring the film closer to a wider audience, primarily American. I am thinking of hiring Tina Turner for the title female role, a world pop-rock legend, and at that time one of the biggest music stars.

In addition, there is a noticeable turn in the music, which differs significantly from the first two parts, where Brian May did a phenomenal job. Here is music in the style of the then popular pop-rock music and with a recognizable saxophone. Also, there is Tina Turner’s song We Don’t Need Another Hero (Thunderdome), which became a planetary hit and which we all know well. Also, the story is not as raw as it was in the previous parts, especially the first one.

Although different from its predecessors, Beyond Thunderdome has a lot to offer, and it will delight you, at least I succeed every time. Honor to Hardy and the new Max, but Mel will always be the one and only Max for me. The man is simply phenomenal in this role and carries it with such charisma that it is a pleasure to watch him. Always reluctant and disinterested, he finds himself in the situation of becoming a hero and savior of the oppressed, while he never has a happy ending for himself. It is in that collision of himself with what destiny intended for him that Mel does a fantastic job and dominates the whole film.

What excites me every time, through all four of Miller’s films about Max, is that every time he manages to make a lot of impressive characters, find the right actors for them who bring it out in a way that you remember each of them and each of them is very important for the overall impression of the film. That is what Miller did every time, and in my opinion, no one can match him. Although I was skeptical about how Tina would manage, she completely convinced me and I can’t imagine anyone else in that role. All the other characters are great and will remain etched in your memory.

Visually, the film is fantastic. The gloomy future of the burned country has been faithfully conveyed to the viewer, and you can easily smell the dust. The costume design is great as is the look of the Market Square. The market and everything that makes it up, the methane refinery, the castle in the air and the Thunderdome arena, are ingeniously designed. Max’s fight in Thunderdom with Blaster is pure fantasy and indelible in my memory.

Although I’ve watched it many times, I have the same feeling every time, even this last time I watched it. That feeling is the pure pleasure that I felt as a kid watching cult films that defined me in the film sense and turned me into an honest film fan. That is why reading the MM trilogy is one of the films, special for me, which I can always watch and which I always recommend to others.

So Mad Max Beyond Thunderdome is an all-time film that will give you exactly the rich experience that a great film should provide, and today it is increasingly difficult to find such a film.