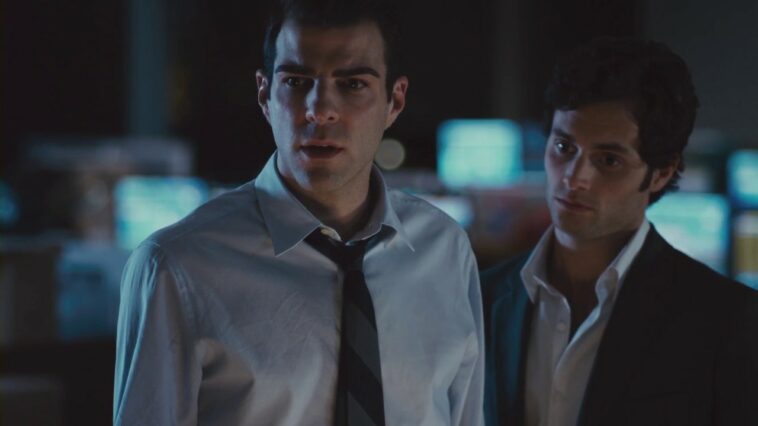 The great world economic crisis reached worrying proportions during 2008, and the filmmakers did not hesitate for a long time to revive the dramatic circumstances on the big screen. Talented JC Chandor has chosen an exciting story for his debut project (expectedly shot as part of an independent production) set in the luxury rooms of an investment bank. The plot lasts only 24 hours, day and night, for a short, turbulent period in which many human destinies have changed, not only bank brokers, but also naive citizens, ordinary mortals who lightly believed that banks could provide them better standard.

Without any extensive introduction, the director ‘goes straight to the first ball’. An experienced financial analyst in charge of investment risk assessment, Eric Dale (Stanley Tucci) is on the layoff list. In the new circumstances, in the opinion of omnipotent bosses, he became an unnecessary, pure technological surplus. The dismissal is immediate and before he leaves the office, Erik gives a USB stick to his younger colleague Peter (Zachary Quinto), with a brief warning to be very careful with the content.

An intelligent young man driven by curiosity decides to get acquainted with the content stored on a USB stick on the same day and thus comes to startling data. The financial collapse of a powerful corporation is inevitable, so the only question is whether it is possible to at least somehow mitigate the damage. A meeting of all management structures was urgently convened, because time is running out and it is necessary to make some difficult decisions…

The socially engaged thriller-drama is declared as an effective critique of modern society in which large international financial corporations play a very important role in the lives of honest citizens. The sensitive capital market in the relentless race for profit simply has no ear for humanity. The principles of corporate business are strictly defined and there is no room for emotions, nor a shred of compassion for employees or clients. It is noticeable that the plot abounds in a multitude of suggestive dialogues, which the director skillfully uses to achieve an enviable dramaturgical consistency and, accordingly, to keep the audience’s attention.

The option to hire a bulky cast proved to be justified. Reputable international acting ensemble (among them we have the opportunity to see real acting bards, such as Jeremy Irons or Kevin Spacey) did all the set tasks correctly, so the crowd on the sets paid off. . Appropriate acting expression gave the film a certain note of authenticity, so it is not surprising that some viewers were convinced that the story was 100% true. Regardless of the fact that this thriller-drama is limited in time and space (everything practically happens in one building – the company’s headquarters), it still has enough dynamics to shake us, upset and even stun us with a strong message that it sends us so explicitly, without sorry.