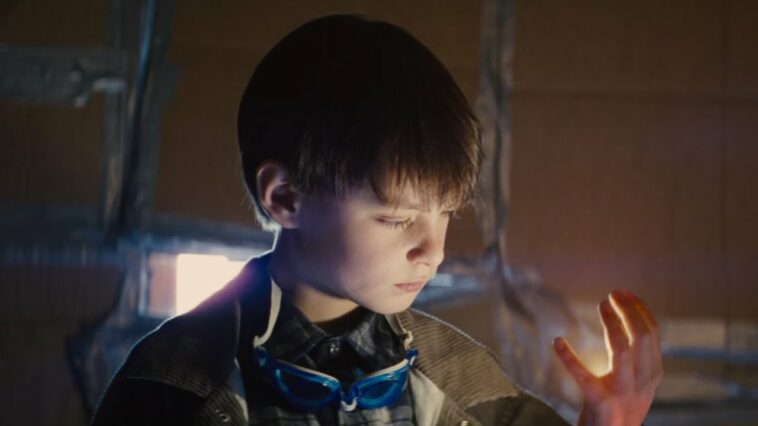 This movie starts from a flying start, so to speak. There is no introduction, but we are immediately at full speed and we are rushing on. The boy Alton (Jaeden Lieberher) was abducted by two men, Roy (Michael Shannon) and Lucas (Joel Edgerton). As we find out, Alton was abducted from the ranch of a certain sect or group led by Calvin (Sam Shepard), the man who adopted him. Soon the FBI raids the ranch, arrests one by one and takes him in for questioning. The reason is that Calvin uses expressions and numbers in his sermons, which are part of the strictest state secret. The situation completely turns around when Calvin admits when he received the information…

I plunged into the story as I jumped into the sea from a high cliff. After falling into the water, a little bit of shock caused by hitting the water, a little bit of a million bubbles swinging around you, you try to find the right direction and surface. This is what my encounter with this film and the story it carries looked like, but you quickly return and start swimming – only this swimming is more like a dream, so on your way you go through various phases where the environment is constantly changing. Here, too, the director skillfully led this unusual story, through different genre environments and gave us a special film atmosphere.

From, let’s say, classic thriller-actions, the mystery slowly creeps in, until the fantasy of the story itself goes beyond those frames and sets off on a completely different genre environment. The story does not reject the environment from which it originated, but develops in an unusual fusion of genres, providing something very special and goes to the end, which gives you the choice to create the same according to your beliefs.

Nichols doesn’t stop there in his directing skills. No, he inserts strong characters into his special and excellent setting, which were presented, very skillfully and strongly, by the well-known actors Michael Shannon, Joel Edgerton, Kirsten Dunst and Jaden Liberer. While the first three have already been proven in their acting careers, and so here, I would dedicate myself more to this last, thirteen-year-old Jaden, who is slowly but surely following the path taken by the first three. We could see Jaden in the films Aloha (2015), St. Vincent (2014) and The Confirmation (2016) where he was phenomenal, and such is the case in Midnight Special (2016). The boy simply has something special that sets him apart from others, and I think we will see him in many more movies.

While we know everything about Shannon and Kirsten, Joel Edgerton has been appearing in more and more films lately, he started directing and writing screenplays, as for the film The Gift (2015). He has played several notable roles in the same, and most of them are films of a special mood, which comes to him as a sign of recognition. He is also great here in a small, but important role, and together with Shannon, he makes a great tandem.

When you think that there is nothing more to add, there is another trump card of this film, and that is music. Special and more like a horror movie, it perfectly follows certain situations, emphasizing certain moments, but in a strange, unexpected way, and yet so perfect that you could not imagine any other. I think that this is another proof of Nichols’ talent and skills, which has once again shown that it has something to offer, and most importantly, something original.

As far as I’m concerned, Midnight Special (2016) is worthy of attention and keeps it to all its minutes. An interesting story, expertly packaged, with the support of a very good cast and music that breaks your head, guarantees a special film experience.