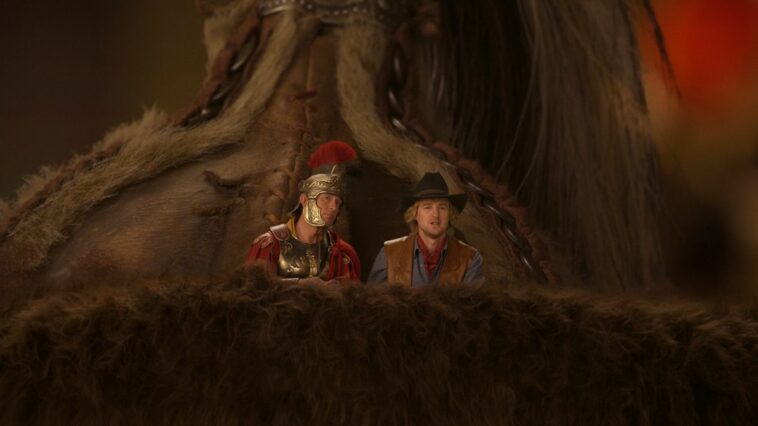 Canadian filmmaker Shawn Levy, after Night at the Museum and Night at the Museum: Battle of the Smithsonian, completes a trilogy about the adventures of a night watchman from the American Museum of Natural History in New York. Great attention is paid to writing the script. David Gion and his colleague Michael Handelman refreshed the series by introducing a couple of newspapers. First, they introduced some new, interesting actors, and then they deepened certain segments of the story. First of all, they raised the father-son relationship to a higher level, because Larry (Ben Stiller) now, like every parent, wants only the best for his child.

This is where the conflict arises, because like most of his peers, Nick Deli (Skyler Gisondo) is looking for himself, still unsure of what he really wants – to go on to further education or embark on an adventure in an exotic tourist destination, where he would have a DJ full time 24 hours a day. What leads to the plot is the unsuccessfully performed show organized by Larry with numerous tenants of the museum. The guild must be paid by its boss, McFee (Ricky Gervais). However, Larry is sure that something is wrong and is trying to find a valid answer. The cause of all the troubles is hidden in a magic board long ago excavated from the tomb of the pharaohs in Egypt. Ahkmenrah (Rami Malek) is sure that the solution to the problem exists, because his father Pharaoh Merenkahre (Ben Kingsley) knows all the secrets of this magic board. To reach him, Larry gathers a group and sets off across the Atlantic, to the British Museum in London…

Apparently, this is the most dynamic part of the series, because it not only takes place (at least for the most part) in a new location, but also in the presence of new characters. A good idea implemented through a plot is more or less successfully realized. The humor is at the level of the established standards of this successful film franchise. It would be said that the director managed to make a refreshing cocktail that pleases various tastes. An adventure that is hard to resist, because it offers magic and in a way takes us back to childhood, when the imagination worked, taking us to fascinating parallel worlds. For that very reason, I am convinced that everyone has found at least a part of themselves in this adventure, which is how they will remember the film.

A sympathetic chaos, likable, witty, funny, and even at times completely twisted. In addition to re-selling us some seen tricks and tricks (for example, with the skeletal T-Rex), the director made an effort to enrich the comedic opus of sympathetic heroes from the museum. The interaction of the old with the new characters from the British Museum served as inspiration to initiate numerous humorous sequences (playing on the map of so-called cultural differences). Of course, I have to mention the knight Sir Lancelot (Dan Stevens), but also the guardian Tilly (Rebel Wilson), a real lunatic who just longs for real action.

The acting releases are quite solid. For the sake of illustration, it should be reminded that Ben Steeler successfully develops an underutilized character. I mean the Neanderthal when Larry nicknamed Laaa. It seems to me that Steeler embodied an extremely nice, but also stupid character with special pleasure. The rest of the team was also satisfied. Dan Stevens delighted with his hilarious performance, showing us the famous knight in a completely new edition, which we are certainly not used to, and Rebel Wilson is not bad either, proving herself once again as an excellent comedian.

The huge budget of $ 127,000,000 enabled the sets to be done in locations around London, in addition to the ones already known (New York and Vancouver). Also, to make numerous colorful costumes so that the museum exhibits take on an authentic look, that is, get the right spirit. The use of CGI effects is not that impressive, but it mostly served to realize the ideas of film crews in a number of visually stylized scenes.