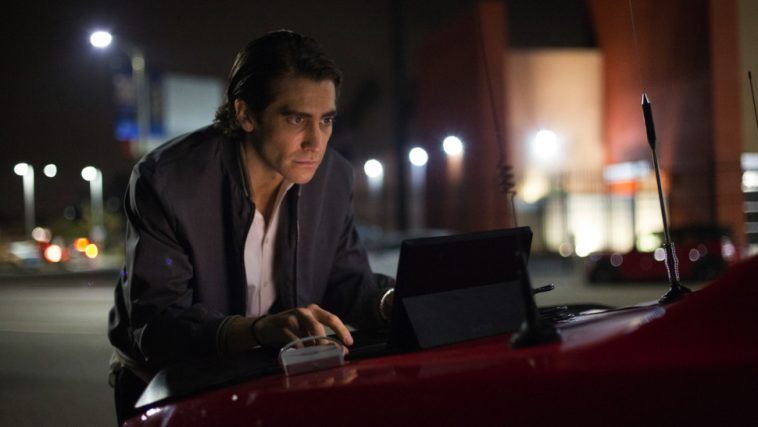 This film not only fulfilled the expectations of the viewers (whatever they were!) But also showed us a brutally honest insight into today’s world of media and the exploitation of sensationalist news. According to my impression, this is a film that will gain cult status in approximately ten years, such as has a Taxi Driver with which some draw a parallel. I don’t mean to do that in my review because the characters in both films are so different and have nothing in common, but the premise of both films is quite similar.

The story follows Luis Blum (Jake Gyllenhaal), a man in his early thirties who lives in Los Angeles and survives from today to tomorrow by doing dubious jobs. Most often, these are petty or major thefts that lead him to even more suspicious employers, from whom he often seeks permanent employment with convincing sweet-talking, but without success. One evening, Luis accidentally attends a car accident and it occurs to him that he also tries his hand at what attracted him instantly, and that is independent cameramen who record various accidents and murders and then sell those recordings to cable news stations. Luis slowly begins to study and record various accidents he sells to a television station, but his appetite begins to grow, and he slowly but surely turns into an insatiable sociopath.

This dark thriller wrapped in a shiny wrapper at moments of satirical critical review of society was directed by Dan Gilroy, otherwise better known as a screenwriter, and this is his directorial debut. Of course, it should not be mentioned that he also wrote the script. He was previously known for working on films such as The Bourne Legacy, Real Steel or The Fall. He obviously wrote the screenplay to perfection, and we can only look forward to his future directorial projects. The film is even funny at times, it has a satirical note, it is dynamic enough, the pace of following the action does not decrease at any moment, it is very intriguing, in a dark and gloomy-psycho way, we follow the increasingly ill motivation of the main character. for us observers.

His character is not terrified by any situation, any part, any accident, he is not afraid of anything. This is definitely a very disturbing film that has an in-depth lesson to enlighten because it is about something that is not foreign or surprising in the world today. The director tried to bring us closer to what is happening behind the breaking news and how to get there. Through the construction of the main character in the sociopath, he tried to bring us closer to how some people really step over corpses to get something best, the most exclusive, not paying attention to the price that mostly others (innocent) pay for them. An example of a metaphor for a lack of emotion is that during the 117 minutes of the film there are no scenes with a kiss, or any other human closeness or warmth.

I haven’t seen a character like this in a long time. acted in this way. I’m really impressed. I’m not talking about the complexity of the character, but about the complexity of the way he presented such an ungrateful role – a cold and insensitive sociopath. There’s not a lot of emotion to work with, and he provided the performance as if he had. When I first saw Jake Gyllenhaal in Donnie Darko, I had no idea that in 10-15 years he would grow into an actor of this quality. He seems, like his character in this film, an unquenchable thirst for acting. After great roles in Prisoners and Enemy, where he also played darker characters, it was the turn of such a dark character that I don’t know how he played him so impressively.

It is a special fact that his character has no emotions. None. His character never feels remorse, has no compassion for any human misfortune, no empathy, no fear. The only emotions, anger and rage towards himself, he showed for a moment, for a few seconds, in the scene in the bathroom when he smashed the mirror to pieces. Halfway through the film is his masterful monologue and a demonstration of the power of his acting greatness when he explains some things to his director.

In other roles are Rene Russo who was raised from the dead by this film and, for her age, this lady is holding up very well. She played her character very well, who, after all, is not much different from our antihero. One small trivia, relatively important, is that the director of the film is otherwise married to her, and look at the coincidences – she plays the main female character in this film. I will also mention Kevin Rahm as one of the more moral producers in the television station and Riz Ahmed as Rick, a homeless man whom our Luis made good use of as his assistant and who, while preparing for the role, worked with real hunters. accidents.

A film that will interest and intrigue you at first, a film that will even entertain you at times, a film that will upset you, and maybe even make you conscious when it makes you think. In any case, personally, after Snowpiercer, the best film without any doubt and certainly worth your attention and time spent.