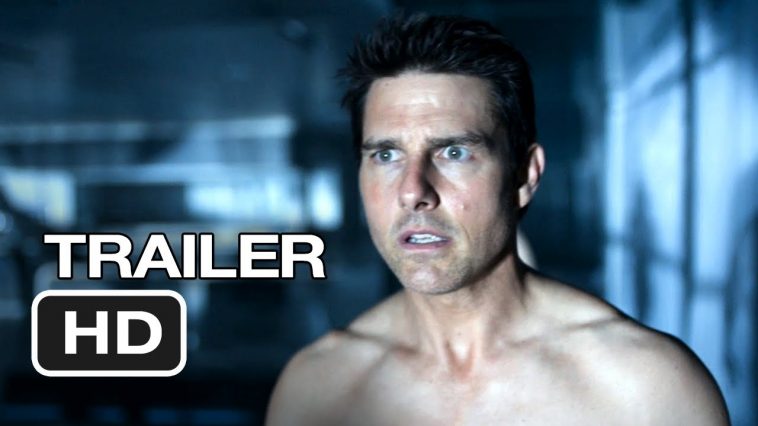 After truly effective, dramatic roles in which he showed lavish talent, such as Magnolia or Born on the 4th of July, Tom Cruise became the face of action sci-fi projects that look like each other to the average film buff. This film does not differ too much from the “mold” of earlier works, which, in addition to masterful special effects and visual beauty, provide a somewhat boisterous and clichéd story that does not hold the strings properly.

This time, Tom plays Jack, a technician who, together with his colleague Victoria, forms a team in charge of protecting plants that generate energy from sea water. The planet Earth was hit by an attack by alien beings who blew up the Moon, which caused numerous geological disturbances that changed the world and almost exterminated the human race, whose remains moved to Saturn’s moon Titan. Officially, Jack and Victoria are the only people on the planet, but after the crash of an unidentified spacecraft containing the body of his wife Julia, Jack begins to doubt and slowly but surely reveals the truth about everything that happened.

The plot of the film is set in 2077, sixty years after the destruction of the Moon by aliens and the collapse of the world on Earth. The viewer is quickly introduced to the story, the very beginning is effective and the plot begins relatively quickly, clearly and beautifully. However, as the film progresses, an increasing number of holes come to light that are impossible not to notice and that spoil the general impression. There are a few small twists, but they are miserable, and essentially a large percentage of scenes have a predictable outcome. There is no real plot, while the characterization of the characters is quite weak. The film has a strong emotional note, but which does not leave a good enough impression, precisely because of the somewhat lethargic characters.

The visual effects are masterful and represent by far the greatest virtue of the entire film. They are so superior in relation to the quality of the story that over time, the viewer is more interested in what the landscape, the appearance of the building or the aircraft will look like in the scene, than what will happen. The planes and the house where Jack and Victoria live are made of quality, detail and futuristically convincing. It seems that much more attention is paid to the technical characteristics than to the story itself. The choice of music is a complete hit, and I praise the work of the animators and the people in charge of special effects. However, I am of the opinion that the film is too long for some half an hour, because some scenes are completely unnecessarily stretched.

There is nothing too much to say about Tom Cruise’s acting. He is a quality actor, but with a series of almost identical roles, including the role of Jack in this film, he managed to lower the opinion of film fans about him and seems to be tied exclusively to blockbusters without any artistic or dramatic values. The role of Victoria was played by Andrea Riseborough, a totally unknown actress, who did not provide anything special, but captivated with her sympathy. The film also features Olga Kurylenko, in the role of the desperately characterized character of Jack’s wife, as well as the legendary Morgan Freeman, who once again proves that it is enough to just appear in the film to instantly raise his interest. You will recognize the scene when Freeman’s character appears for the first time out of complete darkness, and you will really have the impression that God himself appeared to Jack.

I definitely recommend watching this movie, primarily because of the visual characteristics that leave you breathless, and also because of the fact that it is far from a complete failure. With a slightly better script, slightly more events that hold attention and adjust the length and individual clichéd scenes would definitely be the film of the year in its category.