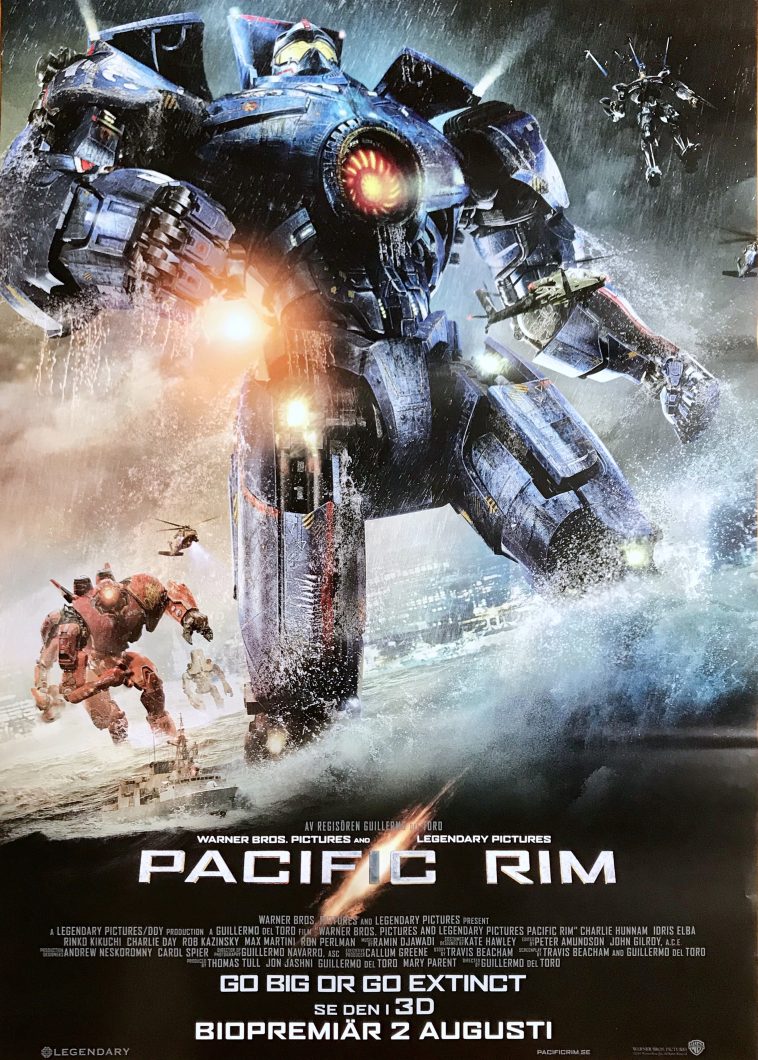 In a year full of various blockbuster spectacles, this one found its place among the better ones, mostly thanks to the name behind it – Guillermo del Toro. Let’s face it, I wasn’t even hoping for some bombastic original surprise, but I’m not disappointed, at least not too much, by what I looked at. The film is done quite solidly and is quite watchable.

The plot of the film takes place in our near future and the human race is facing the worst threat so far, fighting daily for survival against evil, ruthless creatures / monsters called kaiju. Their basic characteristics are that they weigh several thousand tons, that they did not come from space as it was always thought to happen, but from the bottom of the Pacific Ocean, where a portal between dimensions is open, and thanks to that portal, they still come. A trained team that fights against them by creating large combat robots called “Jegeri” is led by Marshal Pintecost (Idris Elba), who after a while is replaced by an alternative, but decides to work in secret, sincerely believing in the success of his way of fighting monsters. The young pilot Reylif (Charlie Hunnam), his best student Mako Mori (Rinko Kikuchi) and many others will help him achieve his goal. However, the question arises as to whether belief alone is enough to make everything work or whether a little more sacrifice is needed that must be made in order to save humanity.

Guillermo Del Toro is also the director, screenwriter and producer of the film, in which about 180 million dollars were invested. The project fulfilled its primary goal, it was a big hit among summer blockbusters, but not everything is as ideal as it seems. The film is full of holes that have all been clichéd in the worst and most famous way possible. Pathetic could not be avoided, both in the initial sacrifice and the created future revenge, as well as in the great sacrifices of the Armageddon type, after which everything is fabulous and great. That is definitely the biggest minus of the film and the characteristic that most viewers resent the most.

On the other hand, the fight scenes are really effective, they look impressive visually and represent the strongest part of the film. No other project this summer and this category (perhaps only Man of Steel) can approach it in terms of how everything is designed and done. The way the robots work is very interesting and innovative, while the kaiju monsters are super done and look scary. There was nothing wrong with that segment of the film, and everything that could be done was done there. One big plus for the visual impression.

In films of this type, one should not talk much about acting, because there is not too much of it. However, I will touch on the actors themselves and the impression they left on me in their roles. Had it not been for the great actor Idris Elba, who is a very charismatic and talented actor, the film would have lost even more importance. Charlie Hannam is a good actor, but by no means great, and he needs at least another fifteen years of film experience to give viewers a more positive impression. When I watched him in the film, I had the feeling that other actors from the popular series Sons of Anarchy would also jump out, because he definitely didn’t come out of his character when he acted for years in that series – Jack Teller, neither physically nor with gestures, let alone dialogue, ie. way of speaking. I wasn’t far from my guess because Ron Perlman, who plays his stepfather in Sons of Anarchy, also got his share of the film as an interesting kaiju organ dealer, although his role was effective and fun. Also fun and specific in the supporting roles were the scientists who work for the good guys – Charlie Day (Charlie Day) and Burn Gorman (Burn Gorman).

However, although I made a lot of negative observations, this is a bulky project full of effective scenes that will leave you breathless, a very exciting and very fun blockbuster. That’s why they received a passing grade and a recommendation to look at it.