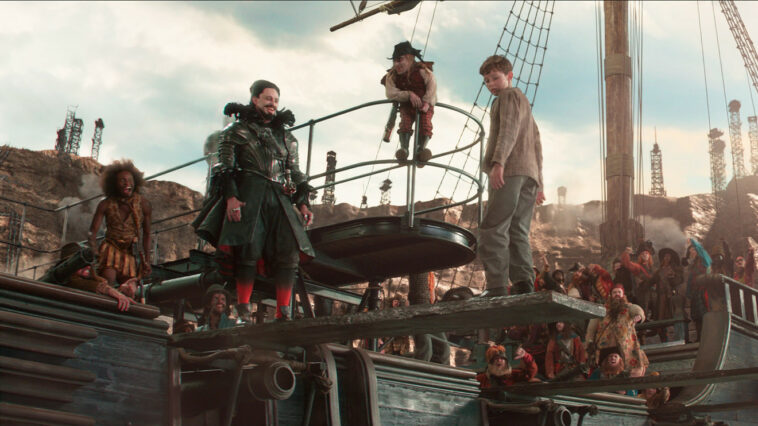 British filmmaker Joe Wright (Anna Karenina, 2012) is signing the latest film adaptation of a popular classic about the adventures of a boy who doesn’t want to grow up. Peter Pan has been a true inspiration to film workers for decades. Many authors have made great efforts to make an impressive film reading, worthy of a longer memory and true to the original content written by James Matthew Berry. It is well known that production companies put the emphasis on the commercial effect, looking for a good opportunity to make a lot of money. Renowned Warner Bros. he invested about $ 150,000,000 in the project, which seems fascinating at first glance, considering that the film is intended primarily for the younger generation.

Jason Fuchs took care of the adaptation of the classic. He directed the audience’s attention to the beginning, that is, to the time set during the Second World War, when Peter was an ordinary twelve-year-old boy, of a mischievous nature. During one amazing night, a flying ship with pirates appears in the starry sky above London, which takes Petra (Levi Miller) to the wonderful land. In land, where Peter discovers a different world. A world inhabited by pirates, an ancient indigenous tribe of warriors and fairies. In such a magical environment, Peter sets out in search of his own identity. Fate paves the way for him, filled with exciting adventures, in which a brave boy realizes that he has a special gift. With the help of new friends, Peter will prove to everyone that he is capable of brave deeds and that he is able to fulfill the prophecy. The little hero is the only one who can defeat the cruel leader of the pirates – Captain Blackbeard (Hugh Jackman) (

What can be said about this film adaptation in which great hopes have been placed? Well, the impression is that a lot was wanted and started, but in reality it did not go far, nor did it achieve much. Visually gorgeous adventure, with many CGI effects, stylish animation, non-stop accompanied by lively musical support (some well-known melodies and lyrics can be heard). I have to remind you that the film was shot almost entirely in Leavesden Studios, England. All right, it has a good atmosphere, charming photography, choreography pleasing to the eye, and imaginatively designed costumes attract attention (well done to (Jacqueline Duran).

The main drawback is the thin script, which is partly understandable if we keep in mind who the target audience is here. The standard setting of the story, without a shred of originality that would refresh at least some detail. Obviously, the narrative was neglected, reduced to a routine reconstruction of what we had the opportunity to read when we enjoyed all the benefits of a carefree childhood. Children need to be impressed, and the easiest way is to apply technological innovations in creating magic on the big screen.

However, I must note that this conceptual concept has revealed another more serious problem. The uninventive narrative obviously scattered the motives of all the members of the chosen cast. No one deserves praise, moreover, some were really disappointed with the pale editions. Hugh Jackman is completely unconvincing, although there was room (in the script) to do much more than one such wicked character as Blackbeard. Rooney Mara seems extremely reserved, so it is obvious in every shot that she is not for such roles.

He tried his best, imitating movements and using the facial expressions of a cult hero (a synonym for adventure – Indiana Jones), but Garrett Hedlund left a favorable impression only on the youngest ones. Their parents are very likely to be bored. Not to leave out the natural kid, who was given the opportunity to play one of the most beloved heroes from children’s imagination. Levi Miller tried to paint a picture of the modern Peter Pan with visible enthusiasm, but he did not excel in the truth of the will. He deserves a passing grade, and you should always keep in mind that the boy is still a beginner.