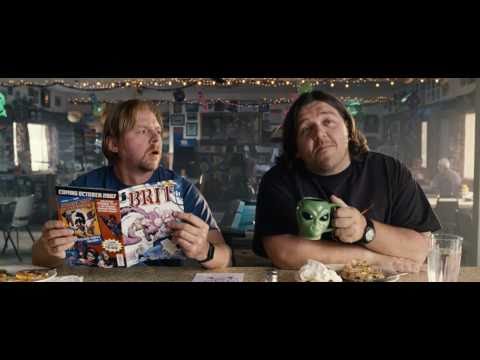 Watching the film “Paul”, it seems that his basic idea was created by removing all, already used depictions of aliens, trying to create a new, hitherto unseen approach. So far, we have had the opportunity to see various aliens in movies, from evil and aggressive, such as those in the movies Alien or Predator, to those calm and benevolent, but still mysterious and unknown to us, such as. was E.T.

However, Paul is something completely different. Apart from the fact that it is obvious from his appearance that he is someone who is not from this planet, Paul’s behavior is completely recognizable in every average American. Namely, it is about the fact that Paul, after a long stay on our planet, fell under the influence of our culture, which modified his extraterrestrial personality, making it more similar to our terrestrial, and thus more accessible for communication with humans.

If we wanted to compare the movie “Paul” with someone similar, it would definitely be the movie Ted (2012). The basis of the story for both films is about the same, so it is very likely that Paul at least partially served as inspiration for Ted. Let’s think a little, just like Ted and Paul is an unidentified creature, characterized by a slightly freer and not overly cultural vocabulary, as well as a tendency to earthly vices. At the same time, we have to admit that the teddy bear Ted is a shade more rude, as well as the bigger hedonist in this comparison. In this presentation, it turns out that Paul is a rather original idea, but it is not quite so. As proof, we will mention only one, very similar alien named Gordon Shumway, better known to us as Alf. We believe that everyone will see the similarity.

Apart from the very idea of the alien Paul, the story built around him is not particularly fascinating. This comedy, in addition to average humor, also offers a very mild dose of action. Fans of science fiction will surely notice and pay homage to films like E.T. the Extra-Terrestrial, Close Encounters of the Third Kind, X-Files and maybe some more on this topic. In addition to Paul, the main characters in the film are also Graham Willie (Simon Pegg) and Clive Gollings (Nick Frost), two British science fiction enthusiasts, with a special focus on everything that has to do with aliens. Judging by this, Graham and Clive are ideal candidates for meeting a real alien. However, their stereotypical understanding of life outside the Earth completely contradicts what they will encounter. Fortunately, Paul is fully acquainted with American culture, in the creation of which, in his own words, he himself participated, which made it much easier for Graham and Clive to become friends with him faster and embark on a joint adventure.

Paul’s computer animation may not be top-notch, although it is satisfactory, but for a film like this, it probably doesn’t matter that much. Also, Seth Rogen portrayed the character of this crazy alien very well, lending him his voice. The film was directed by Greg Mottola, known for the films Superbad (2007) and Adventureland (2009), in terms of humor and quality very similar to Paul, so let that be our recommendation. The humor in the film is actually typically American, with barely noticeable hints of British.