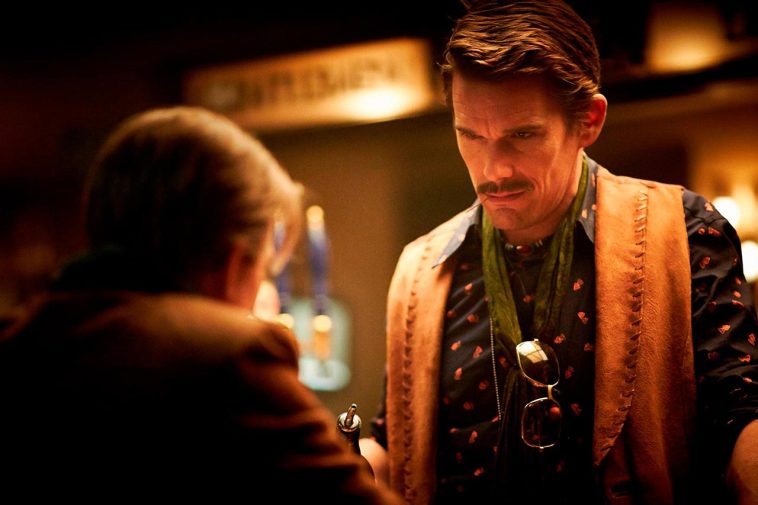 Under a very fresh and strong impression, I am writing a review for this film. Although I’m not sure if I fully understood it the right way, but one thing is for sure – this film requires to be watched several times because it somehow reveals the premise that with each new viewing you will discover something new (important) for a complete picture. With a couple of titles, this was one of the most anticipated films of that year for me and it completely met my expectations.

The story follows an unnamed time agent (Ethan Hawke) who travels through time and prevents crimes. Due to the complexity of time travel, each new trip brings with it lasting consequences, both mental and physical, which are increasingly reflected on it. On his last assignment, he will find himself in pursuit of the only criminal, a certain Frizl Bomber who has eluded him throughout his career as an agent, and whom he never managed to catch even though he was very close to him last time. That is why he decides in the last, most risky way, recruiting a newcomer to finally try to catch him, even though he knows that it will most likely result in something completely different.

This Australian sci-fi thriller is based on the story All You Zombies by Robert Heinlein. The film was directed by the twin brothers Spirig, Michael Spierig, Michael Spierig, Australians of German descent who are responsible for the action horror film Daybreakers from 2009, which I also really liked. Everyone acknowledged the original and very interestingly conceived, but less realized idea of ​​that film. I think that they repeated the thing with this film, but with the difference that in this case the performance was on the level and that they finally succeeded in their intention to provide us with a viewing of an originally conceived film that was superbly realized. They again hired the great actor Ethan Hawke, who worked with them on the previously mentioned film.

This achievement is a mix of many genres and as a whole it seems integrated and coherent. We have the inevitable sci-fi, mostly shown in time jumps, we have a tense thriller while waiting for the next move of the main actors, we have an emotional drama that shows us what is really behind it all, we also have a psychological review in the form of identity search. It’s all very intelligently put together and, although it may be early, some call this film the new Inception.

I would not go that far, but I would not diminish the value of this film, which can and must be watched more than once, and thus fight for its own position in the film world. The brothers themselves said that they read the story at least three times until they finally understood it and started writing the script. They included a lot of sub-themes in the plot itself, with an emphasis on love (lack of love, unrequited love) because they think it is very interesting to explore.

The main role was brilliantly performed by my pet Ethan Hawke. While even today many challenge his acting talent which he unequivocally possesses, I consider him a strong character actor who has shown this in films like Gatacca or Training Day. To avoid spoilers, I can’t write the brightest acting moment in the film. In other roles, the increasingly present Noah Taylor appears as a superior agent. He did this role well by default, although I think this is a waste of time for this actor because he can do a lot more, which he showed in the movie Red, White & Blue. We have already seen the beautiful and impressive Sarah Snook in this year’s horror film Jessabelle, which shared both critics and audiences, but we can look forward to her future projects because she is really promising.

I am of the opinion that I may not have fully understood what this project offers us because it leaves such an impression, perhaps worse than the one after watching Inception or Triangle. I only know that this is a great film that I will watch a few more times, to perhaps draw a deeper and more meaningful conclusion, but even without that I recommend you to watch it because such originally conceived ideas in films are very rare today.