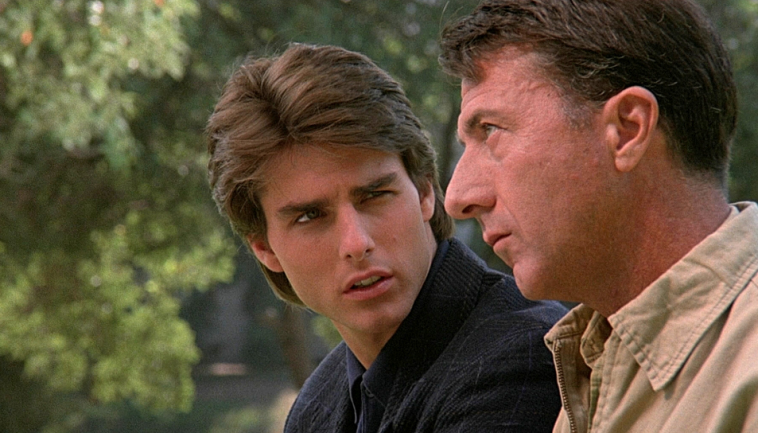 There are few movies for which you will rarely hear a bad word. The realization of Rain Man is just one of those, a film for everyone and to everyone’s taste. At the same time, hardly anyone has not heard of this film and it is very often one of the favorites among the broad masses. No wonder this film won an Oscar for Best Picture, as well as three of the eight nominations it received for this prestigious award. So, at the very beginning, we established that we are dealing here with an achievement that is almost flawless. However, we will try to determine in the following lines whether its quality is proportional to its popularity or whether it is a bit overestimated.

Charlie Bebit (Tom Cruise), a car dealer, learns that his father passed away, leaving three million dollars to an unknown heir, while leaving him only his old car, the classic 1949 Buick Roadmaster. Charlie soon learns that his father’s financial inheritance was sent to a psychiatric institution, where his brother, an autistic savant, Raymond (Dustin Hoffman), lives, whose existence Charlie was not aware of, until the moment of this discovery. In order to get his father’s inheritance, Charlie wants to get custody of his brother. On this occasion, Charlie takes Raymond under his wing and embarks on a long journey to Los Angeles, to meet with Charlie’s lawyer. This time it turns into a real little adventure that seeks to change Charlie’s materialistic traits through gradually getting to know his newly discovered brother.

In the case of Rain Man we have nothing to do with classic drama and one of its trump cards is the presence of humorous elements. The film is imbued with segments that show in an interesting way the uniqueness of Raymond’s personality, through his established habits which are characteristics of his disorder, as well as his fantastic talents which are in a way a side effect of his deficits. However, with this review, Rain Man created an avalanche of wrong conclusions about autism, as a disorder that includes savant syndrome (the appearance of incredible development of certain talents, such as photographic memory, etc.), which is not entirely true.

But, of course, this cannot be taken as a minus to this realization, but rather as a product of prejudice and generalization. Also, according to some, this film had the opposite at the same time, that is. positive impact on raising awareness and breaking down prejudices about autism. However, it is likely that a more detailed discussion on this topic is not the place in this review, so we will generously leave it to people who are more professional than us.

Acting is a segment that must be given full attention in the case of the film Rain Man, more than in the case of many other achievements. By this, of course, we primarily mean Dustin Hoffman’s masterpiece in presenting the character of Raymond. Of course, it was Hoffman’s acting that, as expected, brought this film one of the four Oscars. After, his unforgettable portrayal of the autistic savant seems to have created a new category in acting. Hoffman seemed to set some new standards with this performance, and suddenly everyone who wanted to show their acting skills or aspired for an Oscar, chose the roles of characters with mental deficits, hoping to achieve success like Hoffman’s.

Tom Cruise, on the other hand, was very similar to himself from the acting aspect, more precisely the way we are used to seeing him in most cases, especially in the period from which this film originates. However, it cannot be said that he was bad at it, but in this case more than suitable for the role he played. In the passage about acting, we would also add the name of Valeria Golino (Valeria Golino), who played the role of Charlie’s girlfriend quite well and made this whole story even more sympathetic. After all, this is probably her most notable role in her career, or at least the one for which she is best known, and at least for this reason it is worth mentioning.

Music is always one of the elements of a film because of which we are ready to give it a higher rating. Good film music often makes the film more complete and can really do a lot to contribute to the overall impression. Even when some of his other parts of the film fail, the music is there to blur perception and fill in the gaps. Of course, all this is valid only if the music in the film is really up to the task, and in the case of this film it is, thanks to the compositions of Hans Zimmer. Rain Man is actually considered a turning point in Zimmer’s career in the field of film music, after which he was engaged in numerous films with sound titles, in which he proved his mastery in this field many more times.

Rain Man is a film of obvious quality and an achievement that left a lot of legacy to the films that followed it, although at first glance it may not be so obvious. There are many films in which it is possible to see homages and notice references to the topic of this film, and so it appears, for example. in as many as several episodes of the animated TV series The Simpsons, as well as in many other film productions. Also, the title of the film eventually turns into an almost independent term Rain Man and enters practically everyday speech, as a synonym for everything that is somewhat associated with the character of Raymond Baby. All in all, it’s clear to you that this is a film not to be missed.