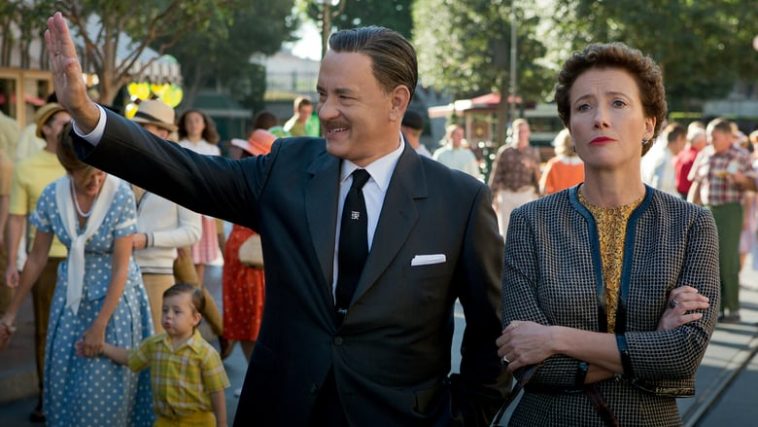 This is a very charming and sentimental project that will delight most viewers. Mary Poppins, to a greater or lesser extent, influenced each of us in childhood, and this film works a lot on a nostalgic basis. The fact is that the film at certain moments leaves the impression of pure self-promotion, but just knowing that this is a biographical project intrigues and interests everyone, although it is definitely not 100% done based on true facts.

Walt Disney (Tom Hanks) promises his daughters that he will bring them the novel Mary Poppins on the big screen, but it turns out that it is a very difficult task because he has been trying to buy the rights to the screenplay from Mrs. Travers (Emma Thompson) for twenty years. She is convinced that Disney will only ruin her book and that is why she stubbornly refuses to give him the rights, but at the urging of her agent, she goes to California to meet him, because she has financial problems. She spends two weeks with the screenwriters and makes sure that the screenplay is written exactly the way she wants.

After the initial rush, things get complicated because they fail to find a compromise regarding the basic things. The film also features the flashback childhood of Mrs. Travers, who grew up with her father (Colin Farrell), whom she loved a lot, despite his alcohol problems, which finally ruined him. Her childhood experiences influenced the design of the book the most, and that is the main reason for her hesitation about filming.

“Saving Mr. Banks “is a smart and optimistic project that will make the classic Disney melodies resonate in your head during its entire duration and long after the check-out rush hour. This is one of the best marketing moves of advertising for both Mary Poppins and the Disney empire itself, but it must be admitted that everything would have been in vain if Emma Thompson had not excelled in the lead role. During the film, Ms. Travers shows us numerous emotions, so that at the very beginning she becomes difficult and unpleasant towards others, while over time we see how great her mental pain is and how important her novel really is for her.

It’s really hard not to feel strong emotions while watching and the project engages the viewer a lot, no matter how interested you are in the life story itself. On the other hand, there are people who love Mary Poppins, but they don’t care how the film came about, and even they can enjoy watching it. A big plus for the whole film is given by flashbacks, which explicitly show and suggest how important the artist’s past really is for what the artist is doing, ie. that in each of us there may be an artist and finally how art affects all of us in different ways.

In addition to Emma Thompson, who was bypassed by the Oscar nomination, we should mention Tom Hanks, who is really good in the role of Walt Disney. He would definitely have gotten more attention for his performance had it not been for the masterful performance in Captain Phillips, especially in the last twenty minutes of that film. A plethora of great actors in supporting roles, such as Colin Ferrell, Jason Schwartzman and Paul Giamatti, make this film even better and of better quality.

This is an emotional and charming project that will simply blow away fans of lighter comic dramas. With great acting, an interesting script and an action that affects many of us sentimentally, everyone should dedicate time to watching it.