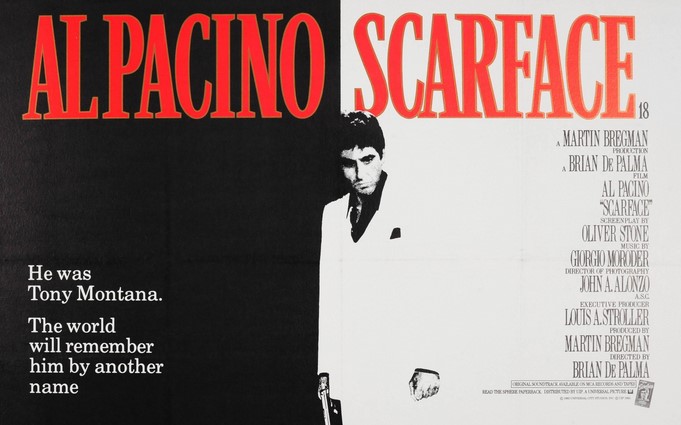 Director Brian De Palma was nominated for worst director at the 1984 Golden Raspberry Awards. Perhaps nothing would have been so strange if De Palma had not made a film that year based on when a mega-popular video game was made, a film that ranks very high with both critics and audiences, while the protagonist is one of the most recognizable characters in contemporary pop -culture.

After the opening of the port of Mariel in Cuba, hundreds of thousands of Cuban refugees who represent an obstacle to the new Cuban government were given the opportunity to seize the territory of the United States. Among them is Tony Montana (Al Pacino), a very ambitious young man who wants to gain wealth. Yet, like most Cuban immigrants, Tony has to start from the bottom and get a job as a dishwasher. Shortly after that, together with his friend Mani, he finds himself in a situation to engage in criminal activities, successfully passing the first test and being employed by big boss Frank Lopez. His life represents everything Tony wants, from influence and power, through wealth and money, to a beautiful wife, and he slowly but surely does everything to remove him and take his place.

“Scarface” is one of the films that did not gain fame during the screening, did not break the box office, but over the years it gained numerous fans and admirers and built a cult status for itself. On most lists, it is in the top five best gangster films in history, while the cult scene that all film lovers recognize even though they have not seen the film, in which Tony says “Say hello to my little friend”, is classified as cult in film cinematography.

The screenwriter of the film is the acclaimed Oliver Stone, winner of three Oscars. Some critics ask what his intention was when writing the screenplay, because the character of Tony Montana is negative and dark, which is not very characteristic of the main characters. On the other hand, his dedication to his family, optimism and ambition are virtues that make people remember him as a kind of role model or idol. His balance between a self-sacrificing brother and a man who kills people with a chainsaw is a thin line that separates a self-destructor from a businessman.

There are stories that Stone often contacted the police and inserted real cases into the script, such as the famous scene with a chainsaw. Individuals believe that Tony Montana was created based on the life story of Pablo Escobar, although that is unlikely. Due to problems with the local population who were dissatisfied with the way they were shown in the film, the team had to move the set from Florida to California, and the dissatisfaction went so far that the cast that worked on the film received death threats.

The main reason the film has its current status is Al Pacino’s top performance in the lead role. He is very effective, convincing and charismatic, captivates with his appearance, keeps his attention on himself and carries a full 170 minutes of film. Although he acted in numerous films, the role of Tony Montana definitely marked his career. In the constellation of quality actors, I single out Michelle Pfeiffer and Steven Bauer, who represents the only real Cuban in the entire cast.

This film is a must-read for anyone who considers themselves a film lover. A violent, effective and interesting story about sacrifice, desires, motives, ambition, friendship, loyalty and betrayal and one of the best films of all time.