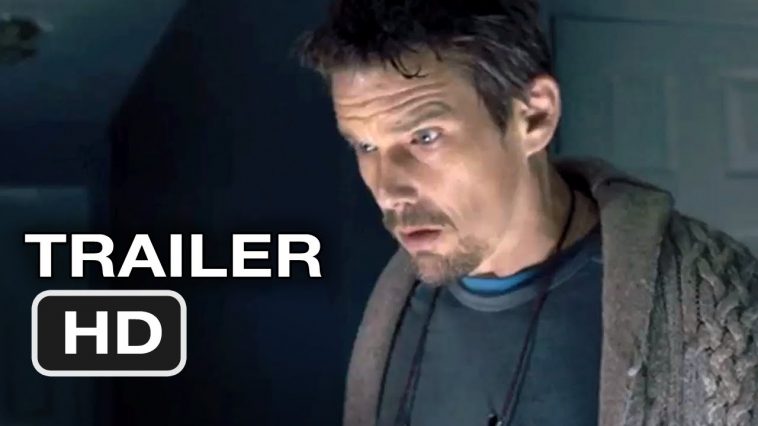 The plot of the film follows Ellison, a popular writer of crime novels written based on true events. He is in a creative crisis because ten years have passed since the publication of the bestseller with which he achieved fame, and Ellison’s financial situation is no longer stable. He moves with his family to a house that was the site of a horrific crime in which four family members were killed and one child went missing. In the attic, he finds footage showing a total of five murders of families, the first of which was made in 1966. The murders are connected by one symbol, and Alison is desperately trying to reveal the perpetrator and the motives.

Immediately after watching it, I got the impression that I almost didn’t watch a movie that has as many tense and horror scenes as this one. Although most viewers know or assume what will happen next, as a rule, they still fail to avoid the reaction of fear after seeing the scene. The scenario is simple, but it is interesting. It has elements of what has already been seen in the plot itself, as well as in numerous scenes that have been seen in previous projects. What is definitely different is that an excellent characterization of the characters has been done, who are excellently developed. Ellison and his family are tormented by internal problems and misunderstandings, so this horror also has a tense family drama within it.

Visually, the film looks nice, the camera and direction are good, while the team in charge of effects and post-production did their job as well as possible. Particularly effective scenes were shot with a hand-held camera with a lot of handshakes, which in themselves create the impression of fear in the viewer. Almost the entire plot of the film takes place in one house whose spook and dark atmosphere have been brought to the maximum. The “creepy” effect is enhanced by the great sound and soundtrack and I praise the work of the people in charge of lighting.

The main role was played by Ethan Hawke, who definitely pleasantly surprised everyone. He is an excellent actor, capable of presenting superb material, and I especially emphasize the scenes in which he expresses his anger and frustration due to constant failure. The role of his wife was played by the relatively unknown British actress Juliet Rylance, while I would especially commend the young actors who played the roles of their children.

“Sinister” is a great horror that will not disappoint fans of this genre. It has a great script, good acting, a tense atmosphere and a large number of scary scenes that do not allow the viewer’s attention to diminish, and I recommend it to everyone to watch.