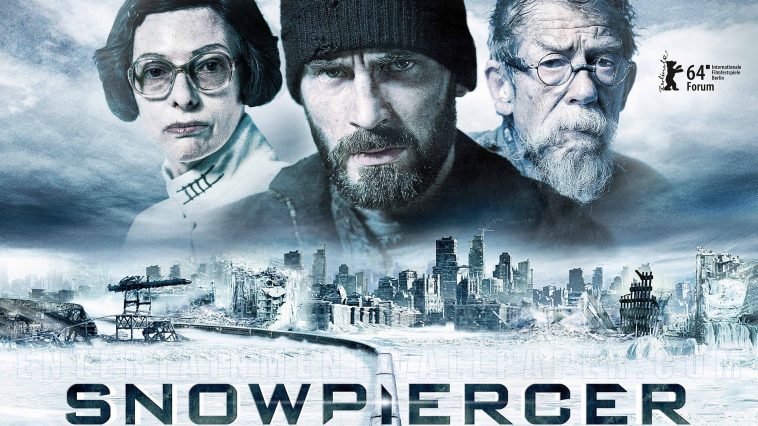 My review of this long-awaited action sci-fi drama will not be completely objective, so there is a possibility that you may not like the film as much as I do. So don’t take my impression as some general absolute of film quality. The undeniable fact is that this is a good film, only the nuances decide whether it will be very good for someone, great or like me – masterful. It is important to note that the logic or search for the same in this sci-fi realization can greatly spoil the very impression of the film, so don’t even look for it, because it is really a minor factor in this project.

The plot of the film is set in the not so distant future, in 2031. Due to human negligence and the failed experiment of global warming, the opposite happened – global freezing. The only surviving people on the planet, which is no longer a pleasant place to live, are in a special train with the symbolic name Ice Sting, which moves non-stop. The train is actually a “train of life” or what is left of human civilization and works on the principle of perpetuum mobile. In that train, over time, a class division is created between the rich inhabitants of the front part of the train and the poor inhabitants of the rear part, more precisely into the rich and the poor. There is no middle, unless the middle is made up of law enforcement agencies as a special class that is between the powerful and the powerless, but is of course in favor of these others – the rich and the powerful.

When the leader of the passengers from the back of the train, Curtis (Chris Evans), carries out a long-planned rebellion against the “law enforcement agencies” and wakes up in a makeshift prison a mysterious man named Namgong Minsu to help him, then a real massacre begins. After the initial struggle and success of the poor, a very important person Mason (Tilda Swinton) falls into their hands and tells them that he will take them to the main but mysterious man Wilford who manages the train and who is a kind of God for all passengers / residents of the train. Their adventure only then begins.

This film simply has everything – from the story through quality acting and directing, to an effective visual experience and an ending that will not delight many, but when you think about it, it could not have ended differently to achieve what the director wanted. We have a great introduction, we have a presentation of the characters, we have the current state and situation, we have a rebellion, we have a massacre that thrilled me in terms of what preceded it, how it was conceived, how it begins and slow in the scenes that follow, and most of all what it represents. We have the carnage in several stages of the film and each is special in its own way. Some scenes in the film are so impressive and will delight you so much, such as. a hand pushed through the opening of a train that freezes in a minute.

The masked law enforcement agencies are something of the best in the film because they represent precisely the very essence of human ignorance and the darkness in which we live. All these scenes are the director’s types of metaphors and symbolism, in fact allegories of life, real images of the society in which we live and unfortunately that may await us, if not worse, and they are very original and creatively conceived and performed. I don’t know if people watching the film will draw the same conclusions as me, but I think the point of the film itself is contained in those scenes. That violence is not there because of the violence itself, but precisely because it reacts to human (un) conscience or at least to try to react.

“Snowpiercer” is, after the excellent crime thriller Memories of Murder from 2003 and the action horror comedy The Host from 2006, already the third joint project of the best Korean director Bong Joon-Ho (Joon-ho Bong) and the great Korean and Asian actor Song Kang-ho (Kang-ho Song). There were minor problems with the distribution of this film, it “stopped” for a year even though it was finished. Director Bong is known for the frequent mixes of genres in his films, and for films with a strong social context and excellent dissection of modern society, and in fact all his works so far are a mirror of that. Snowpiercer is no exception. A great elaboration of what kind of society we live in, everything on a plate, everything we have already seen, we know everything, and we still do nothing about it. A very honestly brutal picture of the society in which we live, not at all embellished.

The actors are, with an undeniably powerful visual impression, the strongest part of the film. Each of them has its own part for which it is very important, but the constant are the two actors who carry the whole film – Chris Evans and Song Kang-ho. Evans is a talented American actor of the younger generation whose talent I recognized a long time ago, but sometimes he chooses projects in which he cannot prove himself. In some it shines like in the dramas Puncture or The Iceman, and in some it fails. He is branded and world-famous for the character from the film of the same name, Captain America, and a sequel is expected – Winter Soldier. As for this film, he fit in perfectly with his role as a tortured but smart fighter and leader for justice. Charismatic Song is best known to a wider audience for his memorable roles in Sympathy for Mr. Vengeance and the already mentioned films Memories of Murder and The Host, and in this film his role is one of the strongest with so little text, and with so many facial expressions and excellent, in the acting context of course, body language.

Tilda Swinton is physically unrecognizable at first, but as she speaks we know it’s her. Her role is well conceived, the essence not of evil but of a frightened and manipulated person who knows nothing better or different. Her performance did not overshadow Evans or the Korean actor, as I thought it would probably be, because she is still a better acting name than both of them. However, the film is designed so that all these actors are in an evenly distributed plane and each gives excellent characterizations of the character he is playing in a certain part of the film. I must also point out veterans John Hurt and Jamie Bell, two actors in effective short roles as victims of the common good. I will mention the still likable Octavia Spencer and the mysterious girl Jonah played by Ah-sung Ko.

I haven’t watched a movie in a long time that has left such a strong impression on me. I found symbolism and allegory of life in every other scene today and I did not view it as an ordinary sci-fi drama but as connected images from life only shown not in a direct way but as a hidden allegory. In my opinion, this film represents a strong critique of a society that is increasingly declining ethically and morally in every possible way, because after all, “man to man is a wolf” and only man will destroy man. I am afraid that the path we are currently “following” has no alternative but some future apocalypse that will kill most of us in one way or another.