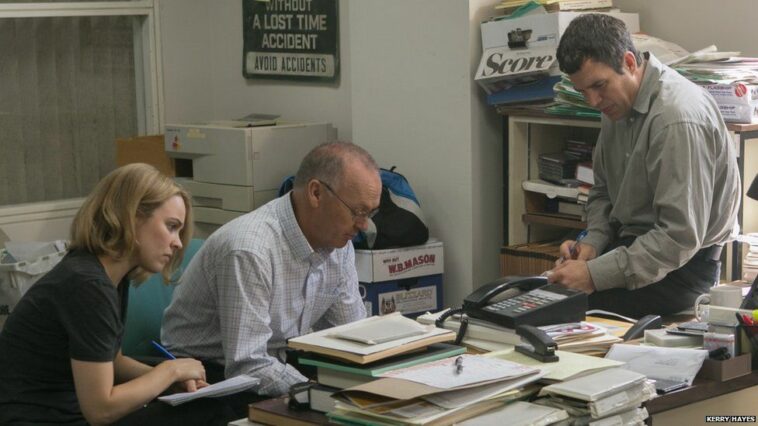 This information alone, or rather the facts, is reason enough to watch this movie. That’s why I stated at the beginning that you know you are watching a terrible but true story that achieved the most important thing – it started an avalanche of events that happened years ago and were hidden, but finally made the system react, and today it is a rarity. I approached watching this film with a great deal of suspicion. I was afraid to watch last year’s Kill The Messenger, an exclusively sensationalist film that didn’t change anything, although it was discovered and available to everyone. I’m glad I was wrong.

Spotlight is a semi-documentary biographical drama that mostly takes place in one of the most famous newsrooms in the world – The Boston Globe. A journalistic investigative team named Spotlight is working on the biggest case that once shook the whole of Boston, but also shocked the world public with the fact that child abuse has been carried out under the auspices of the Catholic Church for years and is constantly covered up. The story comes into focus when the editor-in-chief is Martti Beron (Liev Schreiber), who insists that the story be investigated to the smallest detail.

The Spotlight team is led by the fair Walter Robbie Robinson (Michael Keaton), the young Mike Resendes (Mark Ruffalo), the withdrawn family man Matt Carroll (Brian d’Arcy James) and the only woman among them, the young and sensitive Sasha Pfeiffer (Rachel McAdams). Prosecutor Mitch Garabedian (Stanley Tucci) is also very important for the whole story, as he conducted a separate investigation for years and, despite pressure from all sides, patiently built a case against the Catholic Church.

Spotlight, although, without a doubt, one of the best achievements of 2015, has a significant drawback – it leaves enough space to be interpreted in a way that is appropriate for whom. On the one hand, it’s great that this is a film that doesn’t say (strictly highlighted) how the group, a team of Boston Globe journalists, won the Pulitzer Prize, but mostly says that because of that story and scandal that was finally revealed by as many as 249 Catholic priests publicly indicted and dismissed, and several were sentenced to prison terms. Just a few, you ask? Perhaps in some other, parallel universe, punishment could be expected for all 249, but the great victory is that a verdict was passed against these worst or most notorious. Believe me, nowadays, in this system, it is very much a victory.

On the other hand, although the film is very intelligently set and told in an even better manner, it can still serve certain (usually religiously on a global level) as a tool or argument that something is black and only black (although it has both white and gray) . Especially in many fights, debates, clashes where the church institution comes down to the fact that it was not very tightly networked and relied on other institutions such as the police, government, various powerful people who can be of any profession or politicians. If it had not been networked, the church would not have had such a strong backup to allow long-term systematic abuse of children under its auspices. It is often forgotten, it is put in the background. This is exactly what this film is about.

This is not mentioned often enough, and I personally think that this is the biggest problem, because more pedophiles will be discovered among the clergy, they will save us with new accusations and new trials from these monsters, but after them will come some new monsters. persistently everyone knows what is happening and is silent (for various reasons) or who protects such, consciously or unconsciously, who will save us from such? They are, in my opinion, essentially the real root of this problem. After all, the church did not abuse those children. That’s what people did. People, of flesh and blood, people we meet every day, like me, like you. Yes, they did it under the auspices of the church, but it could also have been done under the auspices of some other institution, and the only thing that is certain is that all those institutions are made by people. Not God, not a coach, not a cop, not a tailor, not someone’s profession. People. And that is the most devastating thing. Until we start thinking about it in the right way, we will still have some new pedophile monsters who just change in those institutions, and those who help them stay where they are, go unpunished.