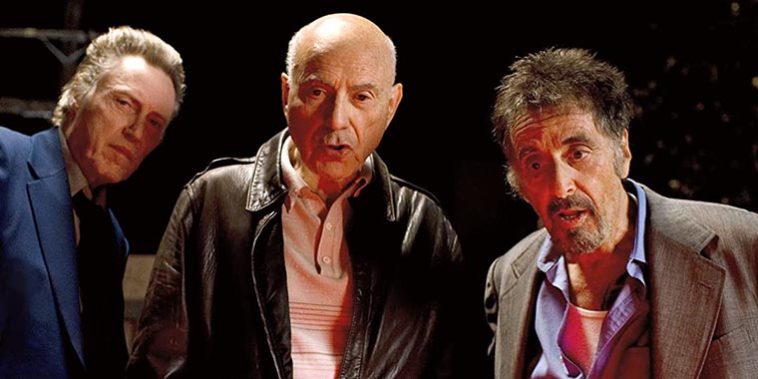 There are films for which the only recommendation to watch is the cast that took part in it. Their quality or charisma are quite enough to simply put other important characteristics of the film, such as the script, into the background. One such film is Stand Up Guys which gives you nothing new, but the actors did their job and pulled it out of the average of movies that will be quickly forgotten.

After 28 years in prison for a robbery that went in the wrong direction, Val (Al Pacino) is finally released. He is greeted in front of the prison by his best friend Doc (Christopher Walken), who is given the task by his superior to kill Val at the first opportunity. While trying to postpone as much as possible what needs to happen, he decides to pick up the third member of the old team, Hircha (Alan Arkin), and embark on his last adventure. During that night, he will meet many interesting characters, mostly women, he will remember the old days and commit petty crimes, before the dawn of a new day that will decide their future destinies.

Al Pacino and Christopher Walken, i.e. their joint appearance on the screen is a feast for the eyes of every film lover. The problem can arise, and it arose in this case, because big names usually bring with them great expectations. The two have already starred in the same film, officially one of the worst cinematic products ever, Gigli, so simply this new film of theirs could hardly have been worse than that. Of course, this project will not leave all the viewers thrilled either, but there is a big difference when Pacino-Walken plays the main roles, and when the supporting roles are the Bennifer tandem.

Screenwriter Noah Heidl, for whom this is the first feature film, took the basis for his work from old, traditional crime adventures, aware that hardly anything new can be done or written on the subject, and that is probably why he is not bothered by criticism that such stories have been seen at least a dozen times on the movie screen. The dialogues are good, with a lot of quotes describing the main characters’ branch and humor that is not debatable and which the main tandem presents successfully.

On the other hand, director Fisher Stevens, who is much better known as an actor than a director, is obviously not very familiar with the work he had on this project, so directing is almost amateurish, but it can be considered a plus. The people who were in charge of photography and scenography successfully created a “retro” impression, and the locations where the film was shot, which leave the impression of fatigue, hopelessness and old age, support this. The main team of actors has been joined by supporting actors who represent the opposite of their age and thoughts, as if the author wanted to tell the trio of old gangsters that some better times await the world.

Watch this film without any expectations and you will have a decent time, although the fact that the main actors are lesser-known names, this project would have much lower ratings.