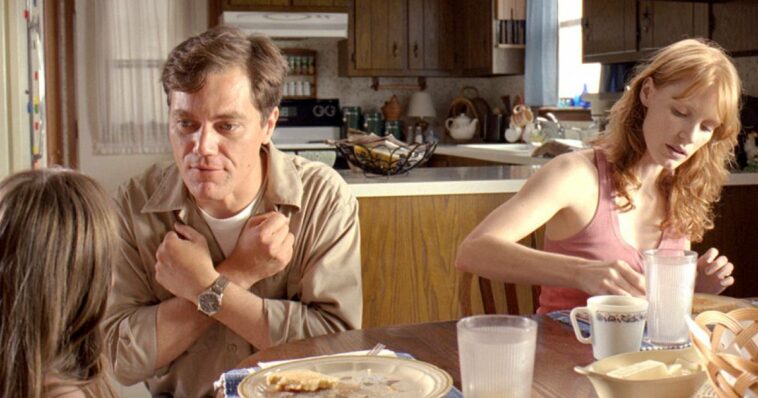 Curtis (Michael Shannon) is a construction worker who lives in the province with his wife Samantha (Jessica Chastain) and daughter Hannah, who has hearing problems. In his dreams, he experiences foresight about an apocalyptic storm, dreams of dark clouds, tornadoes, birds flying in strange formations and people who are abruptly aggressive. He is starting to suffer from paranoia which will lead him to start building a bunker in his yard, and his worsening mental state will cause him numerous problems in the family and the local community.

In this film, the author presents a man who is obviously struggling with psychological problems, but in a way that the variant that the unfortunate Curtis is some kind of prophet is quite possible. The emphasis is completely on the main character and the intensity of his dreams and illusions increases at a slow pace, all the way to the final culmination, which leaves room for thinking. Namely, the end can be understood in two ways, and on the one hand it is great and interesting, while on the other hand it is a bit pretentious. Regardless of the ending, a carefully written script takes us nicely through the film, while the tension and mystery increase after each scene.

Curtis is an introverted and proud man who does not allow himself to be too close and refuses help. His character is complex and his actions require both patience and understanding, and the longer we follow him, we draw conclusions about his condition. However, just when we think of something, the author offers us a new option, but again without any concrete basis. It is this curiosity about the real reason for Curtis ‘problems that leads us through the entire film, and supporting characters such as Samantha or his friend Dewart (Shea Whigham) help us to get a rough idea of ​​the consequences of Curtis’ restless dreams.

According to the author, this film metaphorically depicts the situation of the American middle class after the economic crisis, which was (and still is) exhausting both emotionally and financially. The existential crisis is omnipresent, everyone deals with it in their own way, and the characteristic of an unstable little man is that he expects the worst to come. Fear of losing his job, stress due to family health problems, warnings of natural disasters – all this can be a trigger for mental instability, and in Curtis’ case, his fears of preserving his sanity and preserving his family are both a trigger and a brake in his life. Jeff Nichols proved to be a great screenwriter, and with the help of Adam Stone, the film, with a lot of landscapes and wide shots, looks nice, as if it has a much bigger budget.

Michael Shannon is an extraordinary actor, a giant with emotions when I consider him very underestimated. He does not have the charisma to be the bearer of action in expensive projects, but with his acting qualities and specific appearance, he is the right choice for interpreting the protagonist of a small film with acting-demanding characteristics. Such is the case with the interpretation of Curtis, who is withdrawn and good-natured, but with a mental disorder – not everyone can express such complexity. Along with a plethora of constant emotions, he creates compassion and sympathy in the viewer, although we observe certain actions through the prism of skepticism.

It is quite expected that the voice of reason, a character whose attitudes and decisions are based on logic and reason, must be added to the unstable character, and that is exactly Curtis’ wife Sam. She is also good-natured, but she is much more open and because of logical thinking, there is a quarrel between Curtis and her, and thus she draws some sympathy from her husband to herself. Sam plays Jessica Chastain, who is a hot name from the Hollywood A list today, which is no wonder when you look at her performance in this film, as well as throughout 2011.