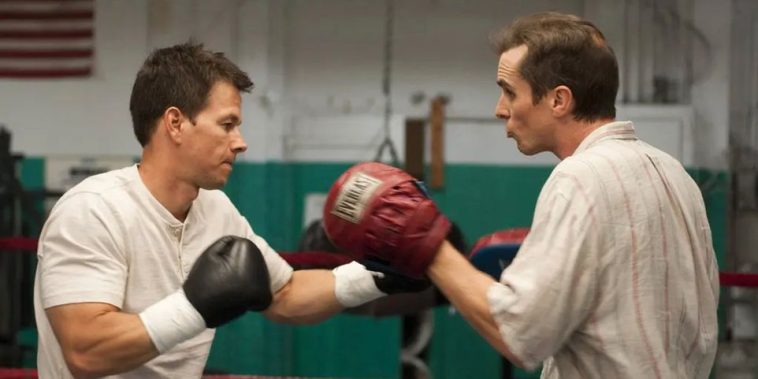 It is generally known that the genre of biographical drama, and especially sports, almost always gets a ton of praise from me on this site, because it is my favorite film read, which I recommend you enjoy watching every time. However, this review will be a little different from other related ones, because I have to refer to a great film, but a great film by a director that I do not appreciate at all. Although this is an American film, it is far from the typical excited propaganda films of this kind that mostly glorify the USA and the American dream. The Fighter actually very realistically depicts the real situation and relations of most American middle-class families, which is much closer to the ordinary citizens / viewers to whom these films actually address.

The action takes place in Lovell, a suburb of Massachusetts, in 1993. The story begins by focusing the cameras on two boxer brothers – Mickey Ward (Mark Wahlberg) and Dickie Eklund (Christian Bale) when HBO starts filming a documentary about Dickie. He is a former hero and favorite of the city and family, a former boxer, a failed talent that Suger Ray won in one match and a problematic crack addict. Together with their mother Alice (Melissa Leo), who is also Mickey’s manager, he trains Mickey, organizing more or less successful lightweight boxing matches. After a very difficult and unequal match in which Mickey suffers a heavy defeat, both mentally and physically, a turning point in his life occurs. In the girl Charlene (Amy Adams) finds new inspiration and real support that gives him the strength to do something unexpected. He decides to train independently from his family and career and takes his life into his own hands.

I agree that it is somewhat paradoxical to write praises for the work of a director when I do not appreciate it too much. Okay, I don’t appreciate it at all. I justify myself and the praise that will follow despite the fact who the director is by the fact that this film was made in 2010, before Mr. David O. Russell became overly commercially irritating, so to speak. He is the creator of the not so dear films Silver Linings Playbook and American Hustle, which, in my opinion, is one of the biggest failures of that year. After these two mentioned films, he became undeservedly overestimated because a person cannot (does not know) connect his own film as a whole.

He relies excessively (exclusively) on the actors who carry each of his films, and sometimes, as is the case with this, they bring him above his clumsiness so that it does not come to the fore. However, a big plus for this film is his work with the camera at the time and the style of the film, which was semi-documentary (although it really wasn’t), but he convincingly gives that impression. The project is based on true events, but it is not based on a book about the life of Mickey Ward, as is often claimed. This is a biopic written by screenwriters Scott Silver and Paul Tamasi who really did a good job.

Still, the best work, as usual in this genre, was done by the actors. It happens, although not so often, that the supporting actor steals the whole film (in this case the Oscar) for himself from the central figure. Christian Bale as Dickie simply dominates and owns all of us with every appearance on the screen, whether he is boxing, running, talking, losing control, enjoying opiates. To play a tree in a movie, I have a feeling that he would do a fantastic job. Although he definitely overshadowed Mark Wahlberg, especially in the first part of the film, in the second we see a couple of good Wahlberg moments that only show us that he is a serious actor who is maturing with every new project.

I must also praise Amy Adams. She is a very powerful character, although her appearance does not reveal that at first, but she and Melissa Leo, who plays the mother, performed strong female roles that match the male very well in this film.

The Fighter is a classically told success story from the bottom to the stars, which contains a lot of cliché elements that occasionally sting the eye, all possible and impossible patterns that we have already seen in some of the most famous boxing movies, but the most important thing is that this film differs from most projects who deal with the topic of boxing is that boxing is still only a side issue here. The main emphasis is on the relationships within this family, which seems incredibly chaotic at first glance, but a family that still survives and stays together in spite of everything.

This story is so inspiring because the main characters in it are like the people we meet non-stop, people who live next to us, and maybe we recognize ourselves in some situations that are by no means foreign to us.