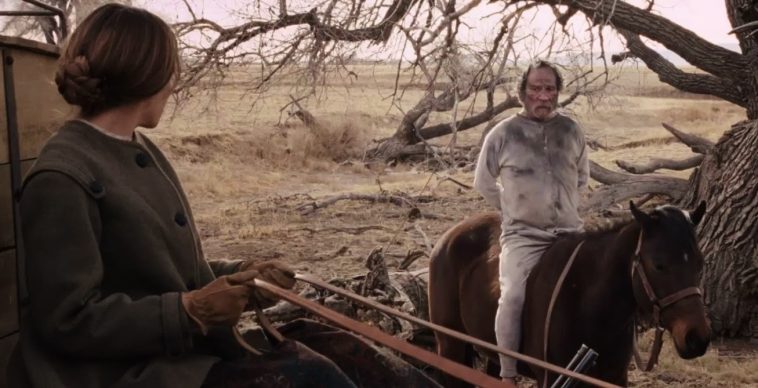 It is really true that those films from which you do not expect anything, almost, and always the most positive surprises. Sometimes you can hardly bring yourself to watch them, as I do in this case, actually not even knowing what kind of film awaits you, or rather, the feeling achieved after watching the film. Since this is a western / drama, and I’ve already written reviews for a couple of films of that genre (Salvation and The Proposition) on the site, I can say that they are slowly getting under my skin. The peculiarity of the atmosphere of the film itself, which I often can’t even describe in real words, sets them apart from all other projects.

The plot of the film is set in 1850, in the territory of Nebraska. Hilary Swank is an unmarried 31-year-old independent woman who, by chance, saves the life of a tramp named George Briggs (Tommy Lee Jones). In return, she asks him to help her with her task assigned to her by a local priest. Namely, she is supposed to transport three mentally unstable women from Nebraska to Iowa in a carriage. Briggs agrees and they embark on a dangerous path on which they will have to deal with many adversities, both weather and human factors – bandits and hostile Indians.

This is the third film directed by Tommy Lee Jones, who plays the main role in all three (The Three Burials of Melquiades Estrada from 2005 and The Sunset Limited from 2011). I have watched all three films and this is his best directorial work so far because he has the most emotional approach. I wouldn’t write too much about his direction or strangle you with these unnecessary details, because I didn’t pay much attention to it until this film. The film is based on the 1988 novel of the same name by Glendon Swartout. Tommy adapted the script with the help of Kieran Fitzgerald and Wesley Oliver.

The Homesman is quite unusually set, unpredictable enough, we have a climax before the very end, the so-called pre-end and utopian end. It is very atypical, but it gives a special charm to the film itself and makes it even more unusual. There are also comic moments that are skillfully thrown aside, into the background, and in addition, the film has a melancholy-tragic line that is read especially during the journey in certain difficult situations.

In such productions, the acting of the main protagonists is very important because it in a way determines what the film is like in the end. Tommy Lee Jones plays an uninterested character who changes during his travels and who begins to care. That’s positive, but to me his acting is never positive. I’m not a fan of him, he’s the same in every movie, so it was in this one. The character of his character is unusual, different, but the pronunciation, appearance, all the same as in previous films. I don’t know if it’s up to me, but I just don’t see him as an actor.

However, this is a women’s film. Hillary Swank, as usual, is brilliant, especially on a couple of occasions (scene on the prairie), but an actress of this caliber is expected to do so. I would like to praise the three women around whom the plot revolves, the women who do not speak during the entire film, and they are Miranda Otto, Sonja Richter and Grace Gamer. A special touch to the film is given by the appearances, first the diva Meryl Streep, who is dosed exactly as it should be, and James Spader as the owner of the hotel.

This is a touching story about human humanity, about hope that does not die, about sacrifice, about re-examining one’s own soul, a story about a journey that really leads to the unknown. One of those small films that gives the viewer much more than a handful of big, famous, but totally empty films.