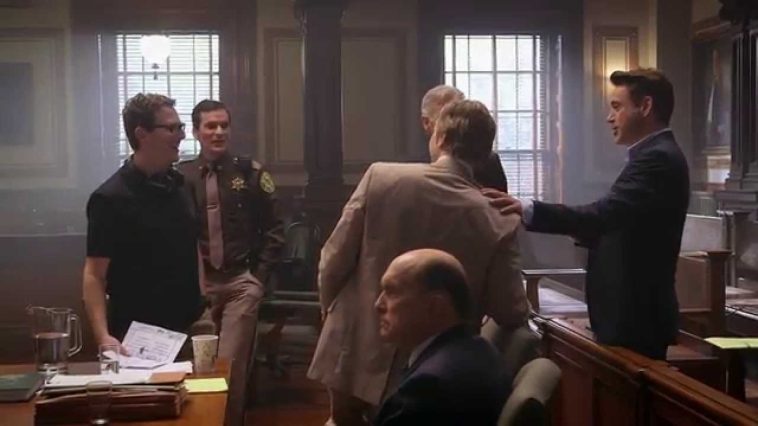 I’m not a big fan of courtroom-related dramas, but the main tandem of actors Robert Downey Jr. and Robert Duvall prevailed to take 140 minutes to watch this achievement. Before watching it, I did not have any information about the film, so based on the title and the poster, I concluded that the action will take place only in the courtroom. What I got somehow exceeded my expectations, but in some segments it also disappointed me.

At the very beginning of the film, we meet Hank Palmer (Downey Jr.), a successful lawyer who is about to divorce. In the middle of the trial, he finds out that his mother has died, and goes to the funeral in his hometown, which he has not visited for over twenty years. There, he meets his father, Joseph (Duval), who is a local influential judge and the main reason for Hank’s departure from home, and his two brothers. Due to the circumstances, Joseph is accused and Hank decides to defend him, although he does not find much support from his father, and this process will make Hank return to the past and reconnect with his family.

The first impression I got was that the central plot around which the film revolves, the events in the courtroom and the accusation that Joseph is facing, is unconvincing, lukewarm and overly clichéd. I watched several episodes of detective series whose trials were more emotional, more uncertain and attractive. Somehow, that court process was more of a link that dealt with family relations, specifically the relationship between father and son. That part of the script is more than successful, he does his job and I personally consider it the central plot of the film, but his problem is that some additional plots, such as Hank’s youth girl (Vera Farmiga) or his meeting with the waitress (Leighton Meester), unnecessarily prolongs film and somehow turned us away from it. I think that the film would be much more effective if it was completely dedicated to family relationships.

On the other hand, director and screenwriter David Dobkin encountered serious material for the first time with this project because he was involved in comedies all the time in his career, and this was certainly too much for him. The work of the camera, especially in emotional dramas, can mean a lot when leaving an impression, but this time there are a number of scenes that simply repel us. He presents the most emotional moments or the most tense moments of the trial as an amateur who made the decisions about filming in the courtroom watching Law & Order, there are simply too many clichéd scenes. Definitely, this material had to be forwarded to a much more experienced director.

The best scenes in the film are definitely when the tandem of Downey Jr. is in it. – Duval and that duo is a real hit of the casting. Dauni Jr. it gives us its characteristic role of an arrogant egocentric with a certain dose of emotion, as individuals would say Tony Stark without an iron suit. Duval is simply masterful, in 140 minutes he expressed almost all possible emotions that a person has. In one scene, he is a confused old man who desperately needs help, while in the next, he shouts and represents authority. Vincent D’Onofrio, who was completely lost in the role of Glen Palmer, is also worth mentioning.

The Judge is not a bad movie, but it had the potential to be much, much more. An improved script that emphasizes one theme more and eliminates unnecessary melodrama and clichés, as well as a better director, would significantly influence the general impression that this film leaves.