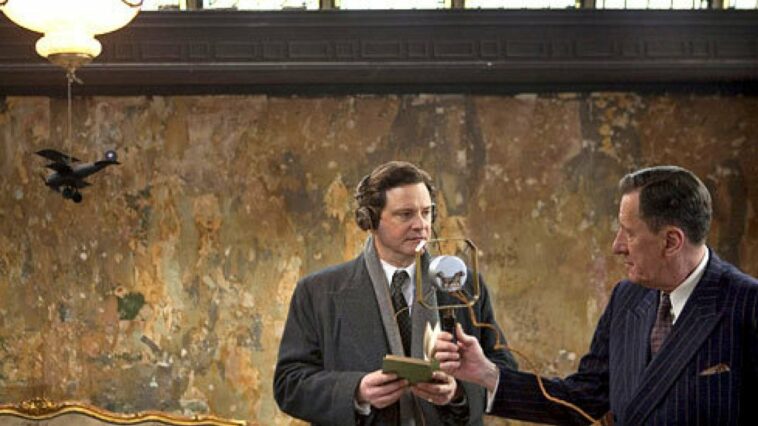 The plot of the film follows the story of Albert (Colin Firth), a member of the British royal family who later became King George VI, the father of Queen Elizabeth II. Albert is an insecure man and is afraid of public royal obligations due to his problem with stuttering. After numerous unsuccessful attempts to solve the problem, he gave up further work, until his wife (Helena Bonham Carter) found Lionel Log (Geoffrey Rush), a speech specialist who has unusual methods of work.

Although it is noticeable that he has no royal ambitions, the title of king is getting closer to Albert, primarily due to the behavior of his brother King Edward VII (Guy Pearce), who is ready to abdicate for love. In addition, Hitler’s power grows stronger and the world inevitably plunges into World War II, and Albert is further discouraged because Hitler and Mussolini are great speakers, whom he cannot match with his insecurity and speech impediment. The British state needs a proud ruler who can lead the country in difficult times, and as cooperation with Mr. Log grows, Albert realizes that he has the potential to successfully fulfill state obligations.

The relationship between Albert and Lionel is full of different situations and emotions, from spontaneous humor, through aggressive reactions, to sarcastic provocations. Lionel is trying to bring the prince down to his level, in order to get to the core of the problem more easily, which Albert initially opposes. They are both stubborn people with strong attitudes, which often leads to quarrels – the seemingly lethargic Lionel does not raise his voice at any moment while Albert shows his explosive nature. The scene in which Albert angrily drops Lionel and calls out his poor past is one of the most impressive in the film, in which we see all the despair of the future king who is afraid of his obligations, but also the kindness of Lionel who is obviously hurt by all those words but does not react to them.

In addition to the relationship between these two people, The King’s Speech indirectly deals with relations within the royal family, the abdication of King Edward VII, as well as the strengthening of Hitler’s power across Europe. We see the beginning of the Second World War and the diplomatic background of the British declaration of conflict on Germany. Some historians resent the somewhat poor portrayal of King Edward VII (who at one point mocks Albert’s stuttering and attacks him as if he wanted to take his throne) and his later wives, who had no royal ambitions and above all thought of their own happiness.

The acting in the film is at the top level. Colin Firth is truly fantastic as Albert, a frustrated man without self-confidence and with an explosive temperament that is essentially benevolent. He presented it in a pleasing way, the incredible effort that Albert invested to overcome stuttering is evident on his face, and we wholeheartedly want to succeed in that. He, in tandem with Jeffrey Rush, another outstanding actor, forms the backbone of the film and I couldn’t imagine anyone else in their roles. The complete team is composed of the cream of British actors and the casting was done perfectly.

This slow-paced film contains a predictable but convincing story, which deals with characters full of kindness and a warm heart with a lot of emotion. Produced at a top level and with actors who are true masters in their work, The King’s Speech is a film led by characters, not a screenplay. Recommended for fans of stylized historical dramas.